What Is The Trump Campaign Claiming Happened To Votes In Arizona? 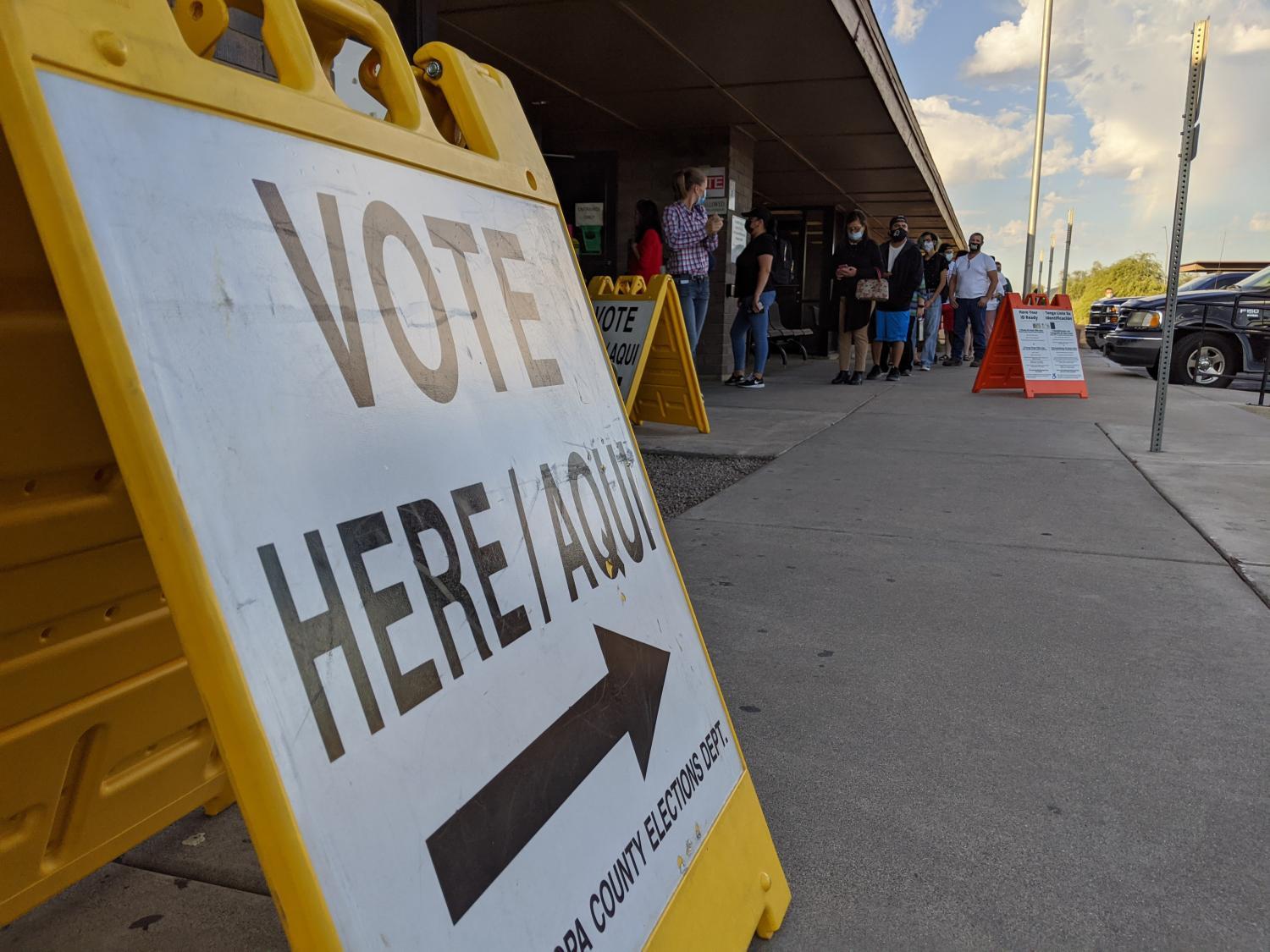 Sky Schaudt/KJZZ
Voters line up at a polling station at an Arizona Motor Vehicle Division office in north Phoenix on Nov. 3, 2020.

MARK BRODIE: As of last night, President-elect Joe Biden's lead over President Donald Trump in Arizona stood just shy of 13,000 votes. There are still tens of thousands of ballots left to be counted here, and it remains unlikely enough include votes for Trump for the president to overtake Biden's lead. And even if the president wins Arizona, he'd still lose the presidency. In Arizona is KJZZ's Ben Giles.

STEVE GOLDSTEIN: So let's talk about some of the basics of this. What is the Trump campaign claiming happened to votes in Arizona?

BEN GILES: So mostly what this case deals with is overvotes — that's if you accidentally or maybe on purpose vote for too many people. Like in the presidential election, to choose one candidate. If you choose two, that's a problem. And even though, you know, let's say somebody did that by mistake, you do get a chance to correct it. The vote tabulation machine, when you voted in person at a polling place, will flag that particular race. And election workers are supposed to give you a chance to correct it. That would mean filling another ballot — filling out another ballot. The Trump campaign is saying that didn't happen in some cases, that people weren't given that opportunity to correct it. And they're claiming that it could potentially affect thousands of ballots, thousands of votes specifically.

GOLDSTEIN: But, Ben, how common would it be for someone to overvote a race? And even if this were a problem, would it be big enough to impact the presidential race here?

GILES: It is not common at all based on what we've heard from Maricopa County Elections. They said 165,000 or so people in Maricopa County voted in person for a presidential candidate on Election Day. And they found 180 overvotes in the presidential ticket. So it is maybe an anomaly, but they're saying this is no sign of systemic fraud as the president's camp has claimed. And even the Trump attorney at a hearing the other day said, "Yeah, you know, at least as far as the presidential race goes, this overvote issue probably isn't a game changer for us."

GOLDSTEIN: So, Ben, forgive me. I hope you're sitting down. This is kind of a political question next. So if it's not likely to change the outcome for the president, why are his attorneys still pursuing this case?

GILES: Well, the one thing to remember is the Trump campaign isn't the sole plaintiff in this case. There's also the state Republican Party and the Republican National Committee. So they're saying maybe there were overvotes in local races, like something like a Board of Supervisors race here in Maricopa County. That's a much closer margin of victory for a Democrat over a Republican than, say, Biden over Trump. Attorney Kory Langhofer for those plaintiffs said, you know, we think that there could be impacts beyond the presidential race and that maybe some GOP seat — GOP races, excuse me — can be flipped to a win instead of a loss.

GOLDSTEIN: And finally, since this is a legal case, there's going to be evidence presented. What, if any, evidence are Republican attorneys planning to present?

GILES: So I was looking this morning through the declarations that every attorney involved filed about what kind of witnesses and evidence they're going to bring up. And Kory, the, the attorney for the Trump campaign is going to bring just shy of two dozen witnesses forward. Some of those, some of those are election... It also looks like they're going to address everything from overvotes to Sharpies. Part of their evidence is the Maricopa County attorney's response to some conspiracy theories about Sharpies ruining votes. There's also at stake, and we haven't had a decision on this, a video that the Trump attorneys say they got of a poll worker doing, what at heart is the problem with the case. Is that somebody overvoted, the machine, the machine noted that and they say, "We have video of a poll worker just moving that ballot along and not giving someone a chance to correct it." The county is objecting to that video being presented as evidence if it is, if it is a video, because it would have been illegally filmed. There's laws against photo or video within 75-feet of a polling place. The judge hasn't decided what, if anything, he's going to do with that video yet. We'll find out tomorrow morning, [Nov. 12], when the hearing goes on for about five hours, it's scheduled.

GOLDSTEIN: Well, enjoy that, Ben. That is KJZZ's Ben Giles. Thanks as always.