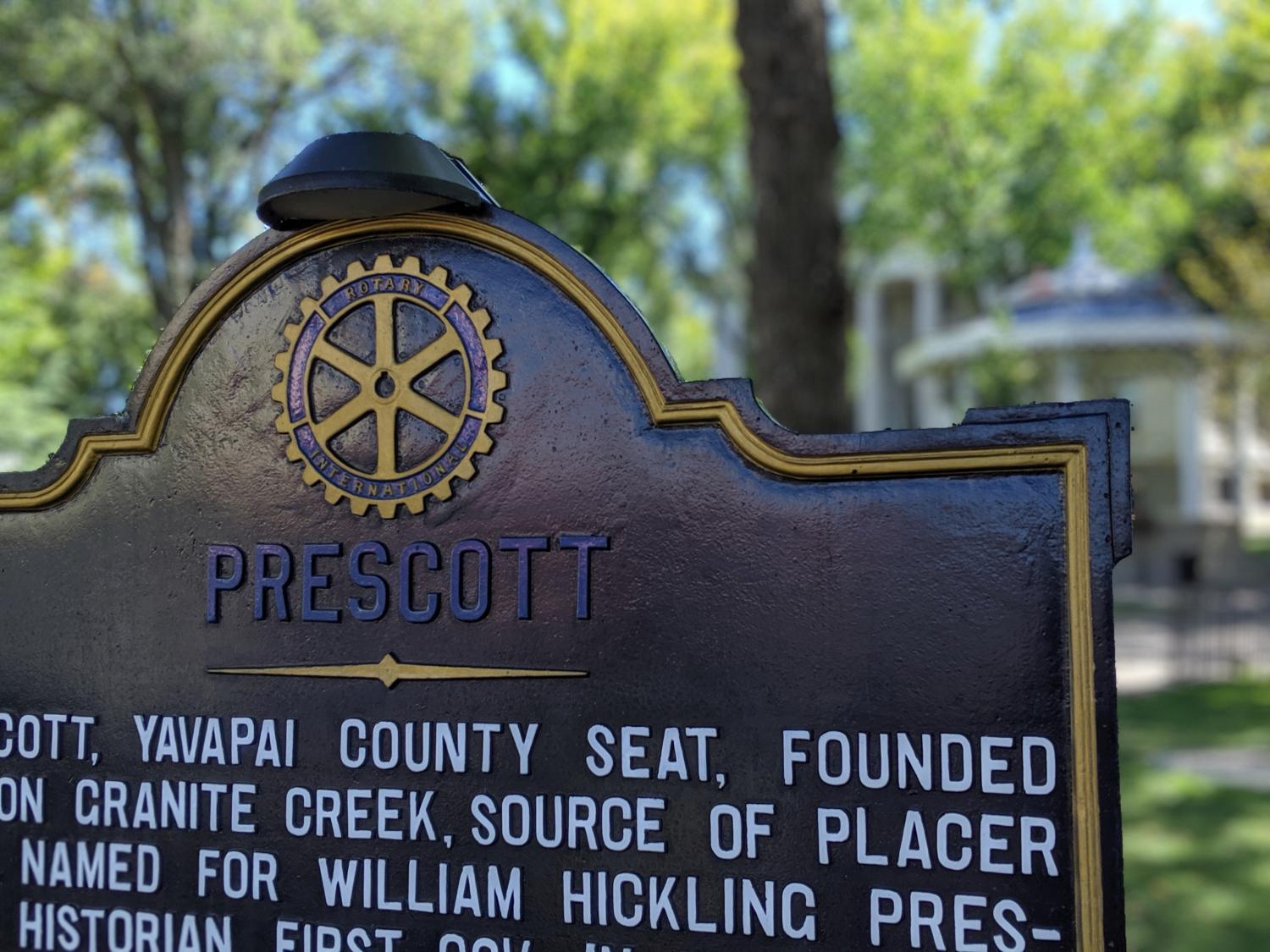 Sky Schaudt/KJZZ
A sign at the town square in Prescott, Arizona.

STEVE GOLDSTEIN: President [Donald] Trump was back in Arizona this week traveling to southern Arizona and Prescott, where he drew thousands of supporters. That included members of so-called hate groups like the Proud Boys and people with Confederate flags. John D'Anna of the Arizona Republic has reported recently about racial tension in Prescott and how it's dividing a community that likes to call itself "Everybody's Hometown." His latest story focuses on an early September afternoon when an 18-year-old young woman tried to organize a small Black Lives Matter event near the city's courthouse square. The event brought out some supporters, but perhaps more notably a number of opponents, many of whom came armed. And D'Anna is with me to describe more of what was happening and how it's affecting Prescott. So John, Nyah Jones had invited some of her friends to this BLM event, but then that invitation went viral through groups that did not support it. What happened?

JOHN D'ANNA: Within hours, her little post on Instagram metastasized on social media and got picked up by the so-called patriot groups. And mostly armed patriots — and Donald Trump supporters and QAnon and people from pretty much every stripe of extremism — showed up on the square to counter-protest. Many of them said they were there to protect Prescott, the town they love from, you know, these BLM and antifa Marxists. And so the rally was really uncontrolled. In a previous rally that had been on the square, the BLM folks had been on one side and then across the street there were sort of counter-protesters posted, and there was a wide separation. On this particular Friday afternoon, it was just a jumbled chaos. Nyah Jones, the young woman who started it all, marched into the square with her friends and her group, and they were immediately met with this cacophony of chants. Nyah and her group chant chanted "Black lives matter," and there was just this thundering refrain back of "All lives matter," and "USA, USA." And, you know, with the amount of firepower that was in evidence there — there were people carrying AR-15s and every other kind of weapon that you could imagine. And many of them were decked out in tactical vests. And so it was just almost a very intimidating presence for this young woman to wade into. But she did it.

GOLDSTEIN: Is there a concern that this actually is broader in Prescott than people might want to admit?

D'ANNA: Prescott is a very conservative community. It's one of the reddest parts of a pretty red state here in Arizona. And the undercurrents of white supremacy and racism have always been in the town. But a lot of people are saying these days that it is more out in the open than ever. Now there's a lot of people who are on the other side, they're progressives. The group Prescott Indivisible has 1,500 Facebook followers, and they've joined with other groups to put on neighborhood summits to try and combat what they see as this rising openness of intolerance. And that's, you know, that, that's one counterbalance to what's going on up there. But by and large, so many people up there on the square that day appeared to be average folks in addition to the militia types that were there.

GOLDSTEIN: So there's a point in the piece where it's almost as though the people who are rallying with AR-15s or, even in some cases, they're not quite that strong. But they're talking about how they're sort of fearful of losing their lifestyle. And then on the other side, folks with Black Lives Matter, in a community like this, especially with some of the folks you talked to, who grew up there, they feel like, well, the importance of their lives isn't even being recognized. Is that sort of what's going on here?

D'ANNA: Definitely. And there's so much lack of information up there. That really struck me. You know, a week after this early September rally, there was a piece that went out on social media, on some of the conservative and patriot group websites that BLM was planning another rally in the Prescott Square the following Friday, which was the 9/11 anniversary. And this just exploded on all of these sites. And I went up there again just to see what was going to happen on the following Friday. And there were hundreds and hundreds of patriots there and no BLM rally, even though people had tried to put out that the local folks who put on the first rally weren't going to be anywhere near the square that day. And so there's just this fear that I think gets compounded on social media. But to your point about fear, I think that is driving a lot of what's up there. And it's fear of the unknown. People read about rioting in other cities, and they don't do a real deep dive to understand what's going on there and what percentage of the people who are protesting were actually rioting. I talked to one guy who said that not every BLM protest ends in a riot, but every riot starts with the BLM protest. And that's, you know, it's kind of an absurd statement. But it's indicative of the mindset.

GOLDSTEIN: That is John D'Anna, senior reporter for the Arizona Republic and azcentral. We're talking about his latest work on racism and racial justice in Prescott. John, always good to talk with you. Thanks.

D'ANNA: Thanks so much.