Halloween During A Pandemic? Tough But Not Impossible 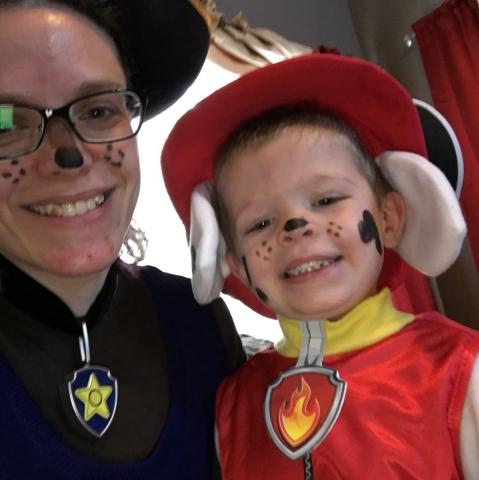 Angelina Beaudry
Angelina and David Beaudry dressed as characters from the children's show "PAW Patrol" for Halloween 2017. Angelina Beaudry recalled her husband, Justin, was the lucky one that year — because he got to be a human.

Imagine: Your kids have been wrestled into their costumes. They are double-masked — one mask to prevent the spread of germs and the other appropriately spooky. They have commandeered your very best pillowcases. And they’re already thinking about which pieces of candy they’ll eat first — and which pieces will be left to ruin your very best pillowcases.

Out the door they go. They rush down to the end of the driveway and look down the road to spot their first victim, err, house and: “Nobody else is participating.”

That’s the nightmare scenario Gretchen Pahia wants to avoid this year: a long line of dark houses, signaling to kids to keep moving and take their trick-or-treating elsewhere. 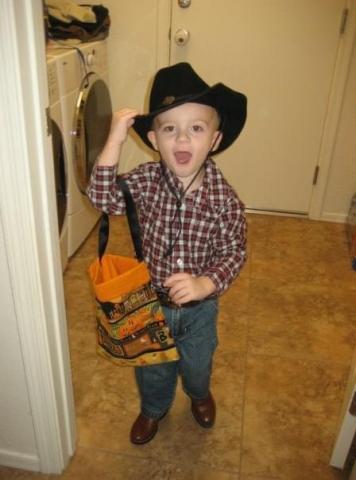 “To kind of dangle that, almost like a carrot in front of them, and say we’re going to give it our good old try — but you’re honestly not going to know until you go," Pahia says. "There’s not going to be a pre-warning ‘hey, we’re not trick-or-treating.’ You just have to go and find out, and then, you kind of have to deal with the fallout afterward.”

She’s not wrong to worry that neighbors won’t be welcoming to her little goblins, better known as her 14-year-old A.C. and 11-year-old Dane.

Saskia Popescu is an epidemiologist for the University of Arizona and George Mason University, and she recently told us that Halloween is going to be tough to navigate in a pandemic. There's no getting around that.

“Theoretically, people can wear masks under masks, right? But I really worry, also, how many people you’re interacting with," she says. "Are those people also wearing masks? Because that’s really the concern, right: our interactions with people who are not wearing masks.”

That’s been a concern for cities across the state and country.

The problem is, even if you take every precaution, you can’t know if others will do the same. The guidelines we’ve been following are meant to prevent community spread, so Popescu says we have to think about how to celebrate without creating the perfect opportunity for the virus to spread.

“Try and maybe do something at home. Do a scavenger hunt at home. Or if you are bubbling with another family, you can do a Halloween thing together," she suggests instead of trick-or-treating.

I asked the Twitterverse for other ideas. Parents’ creative responses included a murder mystery via Zoom, costumes using protective gear, like hazmat suits, and something called a candy canon.

Or you could opt for a classic: candy in a bowl for kids to help themselves. Popescu says that’s still fairly safe.

We are prepackaging candy in small bags and leaving them on a large table by the sidewalk. I'm planning on taking my kid around the block early as many neighbors have said they'll participate similarly, then we'll go back home to keep the table stocked.

If those suggestions aren’t quite good enough, you could do like Angelina Beaudry and go a step further — like, a lot further.

She’s driving her 6-year-old David to his grandparents in Massachusetts.

“The drive is going to take us five days of six to 10 hours of driving," she says. "I have a ton of things planned for my little one that I don’t really want to give away because he is an avid KJZZ listener. So, he will probably hear this.” 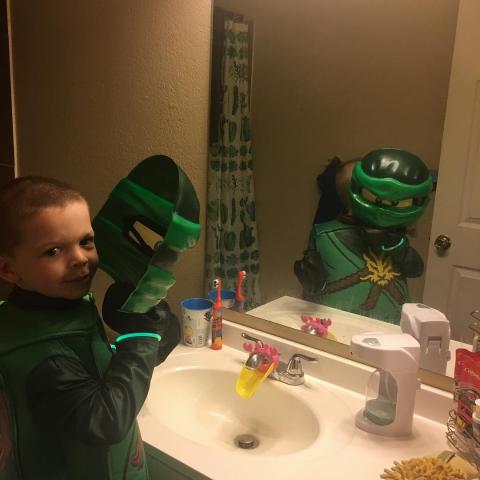 Angelina Beaudry
David Beaudry dressed up as a character from LEGO's "Ninjago" for Halloween 2018.

David loves Halloween, and even if trick-or-treating won’t be the same in Massachusetts either, his mom wants to give him something to look forward to.

“Even if I could just give him, you know, a, like, mini-trick-or-treating experience at Grammy’s house with his cousins coming over, where they come to each room and knock the doors and we give them treats, and then have some, like, Halloween-themed snacks for them," she says. "Anything that’s even close to normal for him and his cousins is what we’re striving for.”

And frankly, any bit of of normalcy would be a treat. Even if that just means dressing up as a family: “He’s been asking to have Halloween, and if he could be Bowser or Venom for Halloween. So that I could be Princess Peach or Spiderwoman or something. I don’t know. He dictates my costume every year. So, I felt like this was the one thing I could give him.”

Well, that and a heckuva-sugar-high. 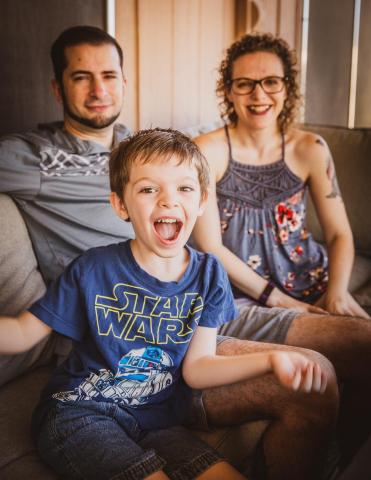 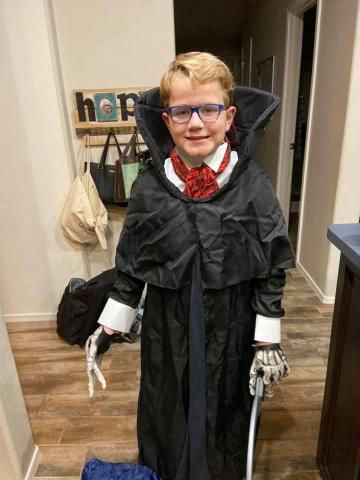 Courtesy of Gretchen Pahia
Dane Pahia, 11, enjoyed a more typical Halloween last year. He went as Dracula. Or was he a skeleton? His mom, Gretchen, couldn't quite recall: "Dracula skeleton?"
The Show