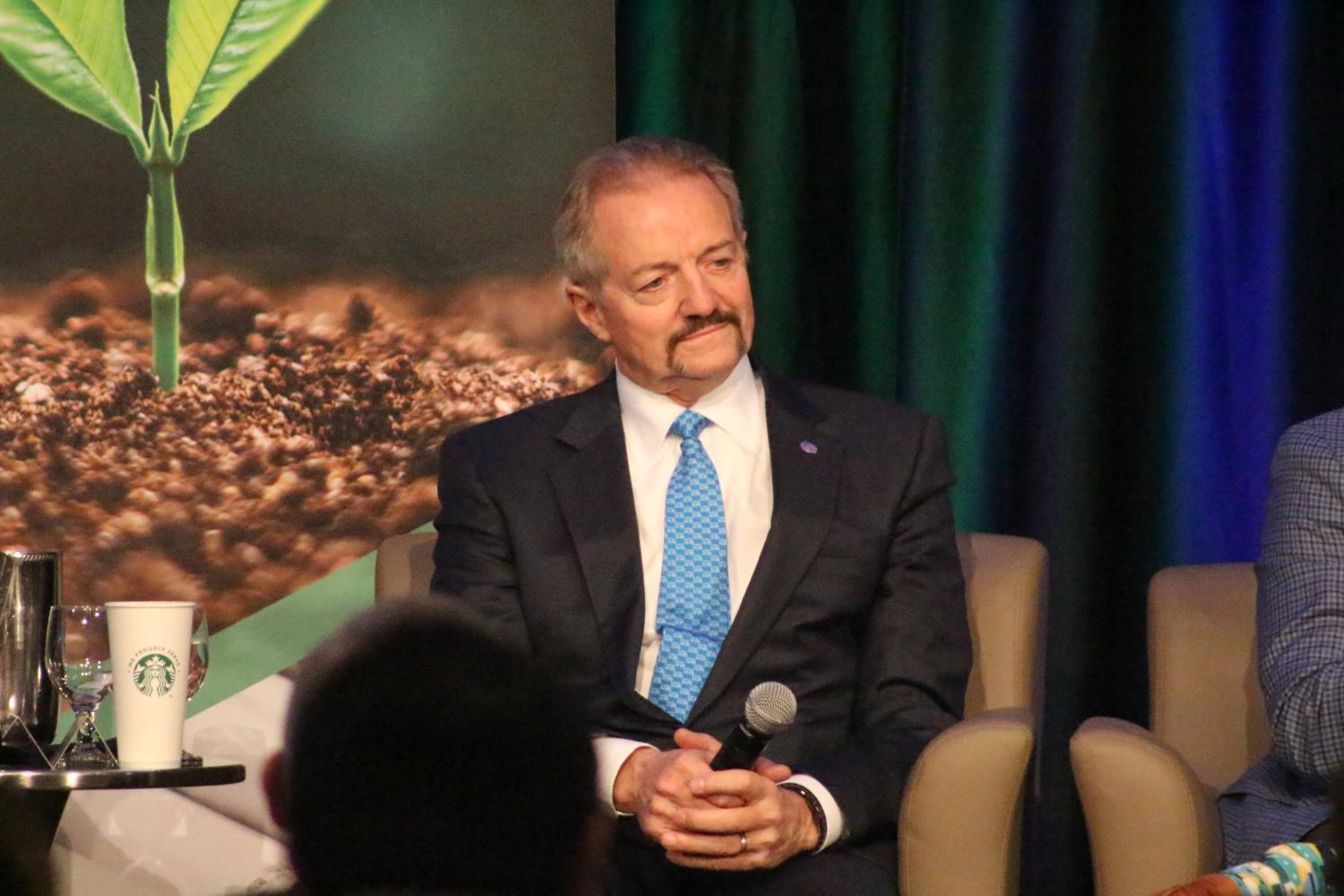 Bret Jaspers/KJZZ
William Perry Pendley at a conference for environmental journalists in Colorado in 2019.

LAUREN GILGER: The question of who exactly is supposed to be in charge of the Bureau of Land Management (BLM) remains up in the air today, though not to its de facto leader, William Perry Pendley. A Montana court ruled last month that he had been serving unlawfully for 424 days — he has not been confirmed by the Senate. But Pendley says he is not going anywhere. Last week, Pendley spoke with Wyoming Public Radio's Cooper McKim about how he views his position.

GILGER: This comes after his nomination to lead the public lands agency was withdrawn by the Trump administration and as Democrats have taken to the House floor calling for his removal. For the latest on this story, I got hold of Rachel Beitsch. She's a reporter with the Hill.

RACHEL BEITSCH: He's still serving in the position. He actually brought that up recently to a newspaper in Wyoming. He said that he is, "I'm still here. I'm still running the bureau." The recent court decision essentially ousted him from his role as acting director. He has been in this job for over a year, appointed through a series of temporary delegations of authority. And the governor of Montana has sued over that, saying you can't just keep temporarily slotting somebody into this role. You need to nominate somebody for the position full-time.

GILGER: OK. So we'll get into a little bit more of that in a moment. But let's back up for a second and just talk about Pendley. Tell us a little bit about his background and why Democrats in particular have been so effective in trying to voice their opposition to him.

BEITSCH: Yeah, I mean, I think a lot of environmentalists would view appointing him as the equivalent of putting the fox in charge of the henhouse. Prior to his current role, he worked for the Mountain State Legal Foundation, which opposes federal ownership of public lands and argues the government should sell them off. Obviously, a huge part of BLM's mandate is managing public lands. I've also heard a lot of complaints from current and former BLM employees who feel like he's shifting the direction of department, skewing the agency a lot more towards oil and gas drilling and mining at the expense of conservation and recreation opportunities.

GILGER: OK, so let's also talk about this case filed in federal court by the governor of Montana. This is not just about him, but about some of the issues and policies that he has implemented in his authority within the BLM. What were some of those policies that the Montana governor in particular is concerned with?

BEITSCH: So the 20,000-foot view on the policy side is they're asking the court to throw out two land management plans that would turn over as much as 95% of those federal lands over for drilling. We're still waiting on a decision on that aspect of the case. But I think the more central focus is challenging all these temporary orders, and later, a change in the succession order that has kept Pendley in his role far beyond what would typically be allowed under the federal law for filling vacancies. The judge in the case has really kind of latched onto those orders and compared them to Russian matryoshka dolls where you have these orders delegating authority and then re-delegating authority over and over again.

GILGER: OK, OK. And in this suit, also, they're trying to void some of the decisions that Pendley has made at the BLM. Where does that stand, and what might the outcome of that be if those were to be voided? Like what kind of major decisions has he made?

BEITSCH: So that does get a little bit confusing. Pendley critics have pointed out that it's notable how many documents and plants he did not sign during his tenure. And their speculation was that Interior knew Pendley's authority could be challenged in court and might be thrown out. Aside from that, a coalition of environmental groups has published a list of 30 different decisions made under Pendley that they'll challenge if Interior doesn't reverse them. So that includes big decisions they've made, like scaling back Grand Staircase-Escalante and Bears Ears National Monuments in Utah. But in Arizona, that would include plans that they've had in the Sonoran Desert National Monument and the Yuma land management plan.

GILGER: So there could be pretty sweeping implications here if that were to happen, if his decisions would be void.

BEITSCH: Yeah, I think it could take a lot of different court battles, but that's something that the Montana case gets at directly of like, "Well, we're only going to be fighting these two land management plans, but we're not discouraging other states from pursuing similar litigation on their front."

GILGER: And it would set a precedent.

GILGER: OK. So let's then end by talking about the recourse here. At this point, who has the authority to remove him from office? What would the process look like here? Or is he just simply kind of waiting for an appeal?

BEITSCH: The Department of Interior is appealing or said they're going to appeal the court decision. In terms of recourse, it's not really clear what the options are. Certainly, there are lots of threats about suing to get him out of there. I think in the Senate, they've really kind of used vulnerable Republicans who are up for reelection to kind of make this an issue. But I think what it could really come down to is whether or not Trump gets another term. There hasn't been a permanent BLM director for the entirety of this administration. So if a Biden administration comes in and is willing to reverse a lot of those decisions, maybe this disappears. If Trump gets reelected, I'm not sure.

GILGER: All right. That is Rebecca Beitsch. She is a reporter for The Hill joining us this morning. Rebecca, thank you so much for coming on The Show to explain all of this to us.