The first thing you need to know about Latino voters in Arizona is: They’re often the last people campaigns talk to, according to Reyna Montoya.

“I think that there’s a lot of apathy,” said Montoya, the founder of Aliento, an activist organization pushing to get out the vote among Latinos. “I definitely relate with them. And I don’t blame them. Because for so long, the question is, do our votes matter?”

It’s not that Latino voters don’t care, she said.

“The apathy is because there’s a continuous lack of investment within the community,” Montoya said.

Historically, campaigns spend a majority of their energy — time and resources — focused on reaching out to other voting demographics. When campaigns then reach out to the Latino community at the 11th hour, that makes driving out the vote a tough sell, she said.

“When you are doing the investment day in and day out, I have first hand witnessed the power and the great assets and contributions the Latino community has,” she said.

That can be true in a state like Arizona, where Democrats have hyped Latino voters as key to a state dominated by Republicans turning from red to a shade of purple, if not blue.

→ Every 30 Seconds: Arizona Voters Head To The Polls

Chuck Rocha was in charge of Latino outreach for Sen. Bernie Sanders’ presidential campaign. In Nevada, Rocha said a $2 million investment in outreach helped net Sanders 51% of Latino voters in the state.

"So nobody could ever say that we're not persuadable, or that we don't vote because I prove both of those adages wrong,” Rocha said.

Former Vice President Joe Biden, Sanders’ closest competitor in Nevada, carried 17% of those voters, according to entrance polls of the Nevada caucuses.

Rocha said Biden has learned from the Sanders campaign, and those lessons extend to Arizona. Here, Biden has ramped up spending on outreach to Latino voters to a level Rocha said exceeds Hillary Clinton’s effort in 2016.

“There is a turnout opportunity here for the Trump campaign,” he said. “And they have been working really hard in some of those communities to knock on doors, to identify voters, and to turn them out as well.”

Coughlin said it’s also wrong to assume that Latinos will only turn out for Democrats.

President Donald Trump is playing defense in Arizona, where polling shows he’s at risk of losing the state’s 11 electoral college votes to Biden.

Coughlin said Trump’s message resonates with a segment of the Latino voting population whose primary focus is on jobs and the economy. They also give Trump credit for advocating to reopen the economy amid the pandemic.

Rocha said Trump’s message isn’t even as important as the fact that the president has bothered to engage with Latino voters at all.

“It's sometimes not all about every issue, but actually about making the attempt to have the conversation,” Rocha said. “So I don't want to let that just pass by without recognizing that sometimes it's more important than the issue to actually have a conversation show up and send some mail, digital ads, even explaining who you are and what you stand for.” 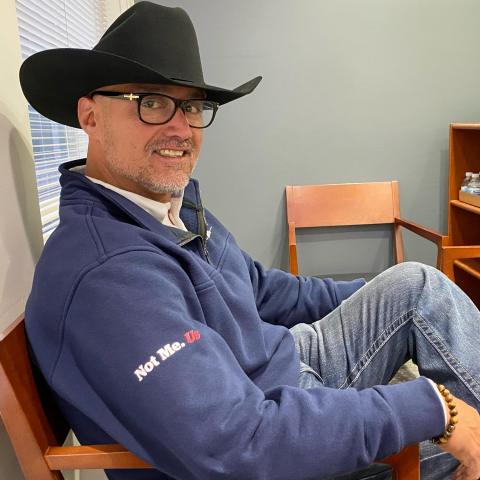 Rocha says Trump’s campaign was smart to realize the president doesn’t need to win an outright majority of the Latino vote. Even a slight increase in support among the Latino community could help the president defend Arizona from Biden.

“They need to get the number above 30%, closer to 40%. The closer you get to 40% of the support, the more you'll definitely be reelected with just that percentage of the Latino vote in Arizona alone,” Rocha said.

A part of the Biden strategy has been a focus on virtual campaigning. Montoya says Biden’s supporters understand that the vice president has chosen to campaign in a way that avoids spreading the coronavirus.

At the same time, Trump’s campaign is here.

They’ve made multiple stops in Arizona in recent weeks. Trump himself planned to visit Arizona this week before testing positive for the virus.

“It's really important that Latinos are being talked to and I mean, we're seeing it with the Trump campaign that they are making that investment,” Montoya said.

Biden did visit Arizona on Thursday, his first trip to the state during the campaign.

So did Vice President Mike Pence, who was in Peoria.