As PBS Celebrates 50th Anniversary, President And CEO Looks To The Future

KERMIT: Kermit the Frog here today to talk to you about the words loud and quiet.

HARI SREENIVASAN: The president remains hospitalized with a diagnosis of coronavirus, but his doctors say he could return to the White House soon.

LAUREN GILGER: Makes you feel a little nostalgic there, doesn't it, Mark?

MARK BRODIE: Every time I hear the Mr. Rogers theme or even his voice. I've loved him. I still watch loving him today with my kids.

GILGER: It's the best. And I definitely had a "Downton Abbey" stage — I think I heard that theme song in there, too.

GILGER: OK. So on its 50th anniversary, I caught up with PBS's current and longest-running CEO Paula Kerger. And we began with a little bit about her. She has said that public media runs in her veins. So how did she come to lead this organization? 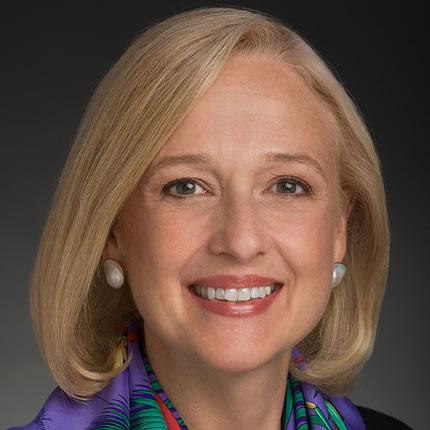 PAULA KERGER: I do think it's in my DNA — my grandfather helped put the public radio station on the air in Baltimore, which is where I grew up. And as a kid, public broadcasting was a very important part of my life. My family watched PBS on... I remember Sunday evenings watching together. A lot of my first arts experiences were on public television. I'm deeply interested in the natural world and I just devoured any program about animals and the world through public broadcasting. But I never thought I would work in this medium. And I came to it about, oof, now it's been a while, like 27 years ago, and I feel like I came home. It's really been an extraordinary experience being part of PBS. And for the last 14-and-a-half years I've had the great privilege to lead this organization. And this has been a period of such fundamental and significant change that it's been extraordinary to be part of it and to be building history.

KERGER: Well, "Sesame Street" and Fred Rogers certainly changed the way that we think of children's television. It used to be the weatherman at a TV station would put on a clown suit and run cartoons — that was children's television. This idea that television could be educational is hugely revolutionary and quite powerful. Julia Child, who really changed the way that we think about cooking, but also cooking shows, began a whole movement. You think of the Loud family, a — An American Family, which was the first of the reality shows ever on public television. Wall Street Week, the first financial news show. "NewsHour," the first nightly, hour-long news show that focused on the important news stories of the day, as well as the context around them. Ken Burns, who changed the way that we think of documentary film and whose great legacy continues on through his most recent work on country music. The sweep of natural history programing that we've had, and science program — "NOVA" and "Nature" that have inspired generations of kids to think about science as part of their life, and, and for many, part of their career. You think about some of the technology landmarks. We were the first to use national satellite transmission. We, we created closed captioning. We were very early on in using digital technologies, and we continue to think and evolve around platforms that are touching people where they want to consume media. And then you think of a little series that some people, you know, would plan Sunday nights around — "Downton Abbey," which even more — in more recent times, I think really captured the country's attention. That's just a quick snapshot of a range of programs that I think have been not just important in public broadcasting, but that were really important markers for television itself.

GILGER: I want to ask one more question about children's programing, because I know you played a big role in this at PBS. You led the launch of PBS Kids, which, I have a 2-year-old — we appreciate it a lot. Why did you think that was important? How does it contribute to the mission of what you're trying to do there?

KERGER: Well, we know that we can reach every child in this country, anyone who has access to a television set. You don't even need satellite or cable. We can reach. And we know that we have over the years created programing that is not just safe and entertaining, but is educational. And it's all built around curriculum the children need to master before they start school. And we know that we can have a huge impact. And so, you know, those were some of the thoughts that we mold as we thought about launching this 24-hour children's channel. We know that we make a big difference in people's lives. And as across the country, we're in a perennial debate about early childhood education and formalizing that, you know, we're leaving a generation of kids behind. We can reach those kids. And that's why it is such an important part of, of the work that we do and what we think about. We're trusted. Parents trust us with the part of their life that is most precious: Their children. And we take that quite seriously and hope that we can constantly look at ways to bring more experiences to children and to get them excited about learning, not just teaching them numbers and letters.

KERGER: I think the most important thing for us is to stay true to our mission and our values. We were built with this idea that media certainly is entertaining, but it can, can also be educational and inspirational. And I think that's really important. That is what differentiates us. We aspire to be a media organization that looks to create an environment for civil discourse, which I think is also increasingly important. And so as you look at the next 50 years, I think the content itself will be really tied to what has been the legacy of public broadcasting, where our opportunity is to think about the new ways of telling those stories. And I think that's what we'll continue to build and involve as we look forward.

GILGER: All right. That is Paula Kerger. She's the president and CEO of PBS. Thank you so much for joining us today.

KERGER: Thank you so much. It's been a pleasure being with you.