How A Nationalist Group In Arizona Has Influenced The Republican Party 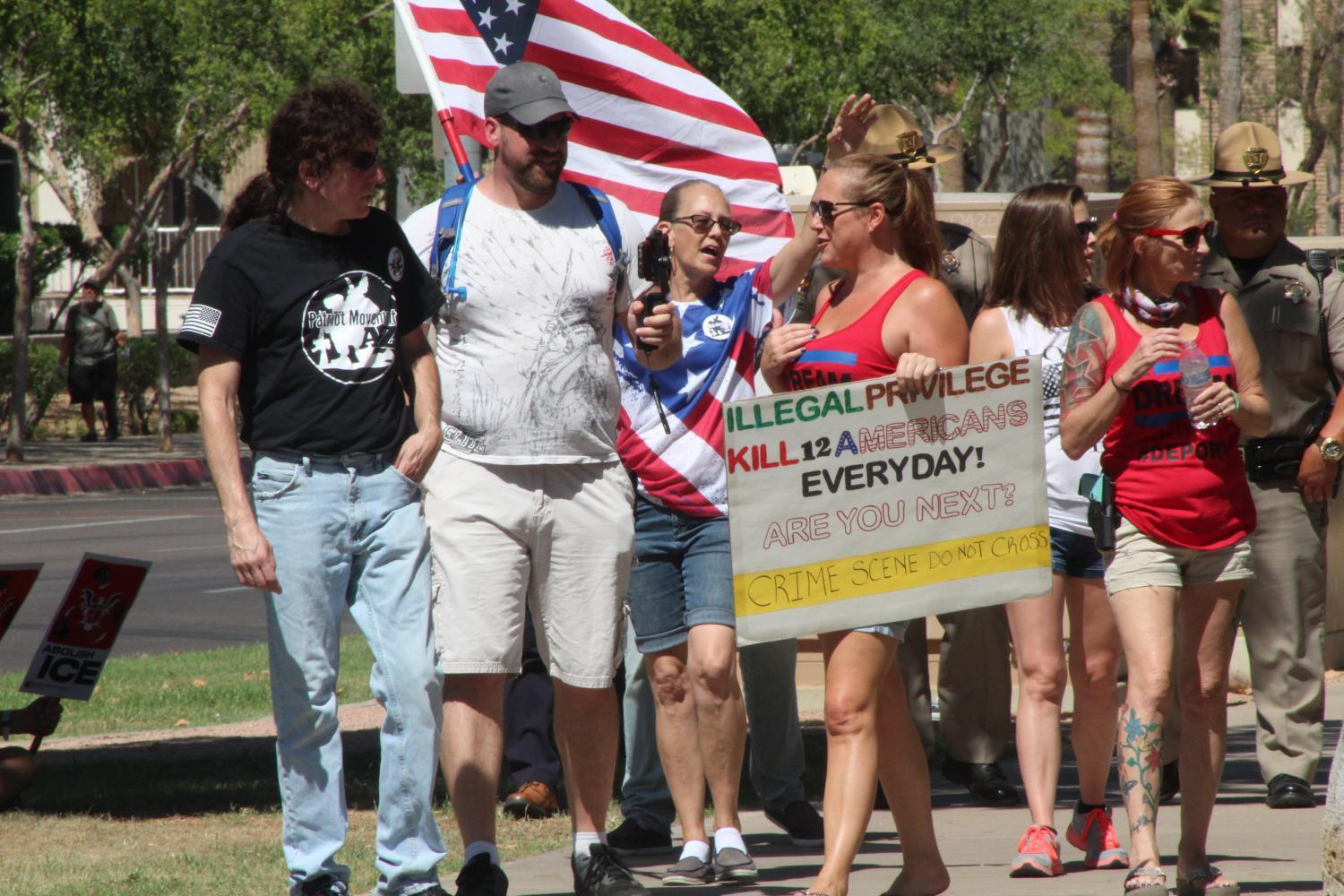 LAUREN GILGER: Late spring into earlier summer, protests mounted online and at the Capitol to reopen the state of Arizona amid the pandemic. The protesters made headlines as images of armed citizens with signs, flags and pro-Trump banners shouted and chanted in front of the Capitol building.

GILGER: Many of the protesters were more than just loosely connected citizens — they were part of a group called the Patriot Movement AZ. It's a group you might have heard of. They made headlines a few years ago when they protested churches that had taken in migrant children who had been separated from their parents. And in 2018, two of their members livestreamed themselves on Facebook as they vandalized a Valley mosque with anti-Muslim slurs.

LIVESTREAMER 2: And there's a store next to —

LIVESTREAMER 1: And there's a store. And it sells burkas. You guys, this isn't America. This is happening. Sharia law in America does not comply with our U.S. Constitution.

GILGER: The group also has had an impact on Arizona politics and politicians. And to tell us more about it, I spoke with Rob O'Dell, a reporter with The Arizona Republic. His new investigation into the organization and its leaders and origins is out now. And I spoke with him earlier about their ideologies, their influence and the leaders who have made a name for themselves in the process.

ROB O'DELL: There's really two main women who were the main drivers of the group. Jennifer Harrison, she's still ubiquitous at rallies and getting in people's faces. The other one is Lesa Antone, who really was one of the founders and one of, one of the inspirations for the group, especially their in-your-face style. Lesa has said she's hung up her hat and doesn't want to do this anymore while Harrison is continuing. You know, she was at some of the racial justice rallies. They sort of split. But as they split, their influence over politicians and policy has only grown. Like, they split, but their ideas have become bigger and marble themselves into the Republican Party.

GILGER: Let's talk more about their ideas, about, about the ideology behind this. Like, you know, people like Jennifer Harrison are seen at anti-immigration rallies that she was, as you say, at some of these racial justice rallies that have been happening over the summer. And you at the Republic got access to a closed Facebook group that they have run for years and got a little bit more insight into what they believe. Tell us more about that.

O'DELL: Yeah. So we got to look at the group's closed Facebook group that ran from 2016 to 2019. So it doesn't cover the current era, but it really gave an insight into privately what they discuss among themselves. Which is sort of an extension of what they talk in public, but you sort of get even more, especially more extremism, more hatred, more Islamophobia, more anti-immigrant. And especially the language is particularly in some cases, vile. But you just get a better sense of how much hatred and sort of an "us versus them" mentality pervades the group. They would probably what be described this as a nationalist group, which is they sort of want to keep the status quo. So anti-immigrant, Islamophobic and also anti-LGBTQ and transgender. So you see a lot of slurs related to those groups. If you would put them on sort of the spectrum, they would be what's called a nationalist group.

GILGER:  So let's talk lastly then, Rob, about some of the influence that they've had that you've hinted at here. Not just, you know, on the media coverage that they've gotten, but also on, on politicians in the state, right?

O'DELL: Oh, yeah, absolutely. You know, they push the GOP. I mean, they aren't the GOP, right? But they are able on some issues to push the GOP because the GOP needs their votes and needs their energy. I mean, their biggest influence probably that everyone has seen is they were a major driver in pushing to reopen the state from the coronavirus lockdowns. They provided a lot of energy in those rallies at the state capital to get the governor to reopen the state. And that's probably been their biggest way they've pushed policy, but it goes deeper than that. The members of this group formed Purple for Parents, which is like a quote-unquote "grassroots parents group" that was set up to battle RedForEd. So when people are looking at Purple for Parents, that was actually — many of the members from Purple for Parents and the Patriot Movement are, are the same. And particularly, you see it in what's called comprehensive sex ed, the opposition to that. Two years ago, this group was really fighting comprehensive sex education. And like, you have to understand about this group, we talked a little bit about ideology. They have a big sort of obsession with pedophilia, believing that their enemies are trying to normalize sexual relations with children. And so that's when comprehensive sex ed has come up around the country, that has been their response — that comprehensive sex ed is a way to groom children for abuse and convince them to be gay and transgender. And that was their sort of talking points within the group. And over time, you've seen that those talking points have become the Republican Party's talking points on comprehensive sex ed. What the Patriots were saying in their closed group two years ago is what the Republican leadership is saying at the legislature this year. And so to see that sort of influence was particularly interesting. And then more recently, the superintendent, Kathy Hoffman, has been attacked with messages online saying she's like Jeffrey Epstein, grooming people for pedophilia. And while the Patriot members might not be behind that group, the ideas that they were talking about are sort of mirrored in those attacks on the superintendent.

GILGER: That is Rob O'Dell, a reporter with The Arizona Republic. The new investigation into the Patriot Movement here in Arizona is on the website now — azcentral.com. Rob, thank you so much for joining us to talk about this.