MARK BRODIE: The current political campaigns and probably many of the others we've seen in recent years have a lot of Americans wondering if the system can be improved. Maybe that's with fresh new ideas, or it could be rethinking some of the old ones. In the new book, "The Politics Industry: How Political Innovation Can Break Partisan Gridlock and Save Our Democracy," Katherine Gehl and Michael Porter write about changes they'd like to see, including creating competition for the two major parties. Our co-host Steve Goldstein spoke with Katherine Gehl and started by asking how much the pandemic could affect how voters and the public at large are to open to new political pathways. 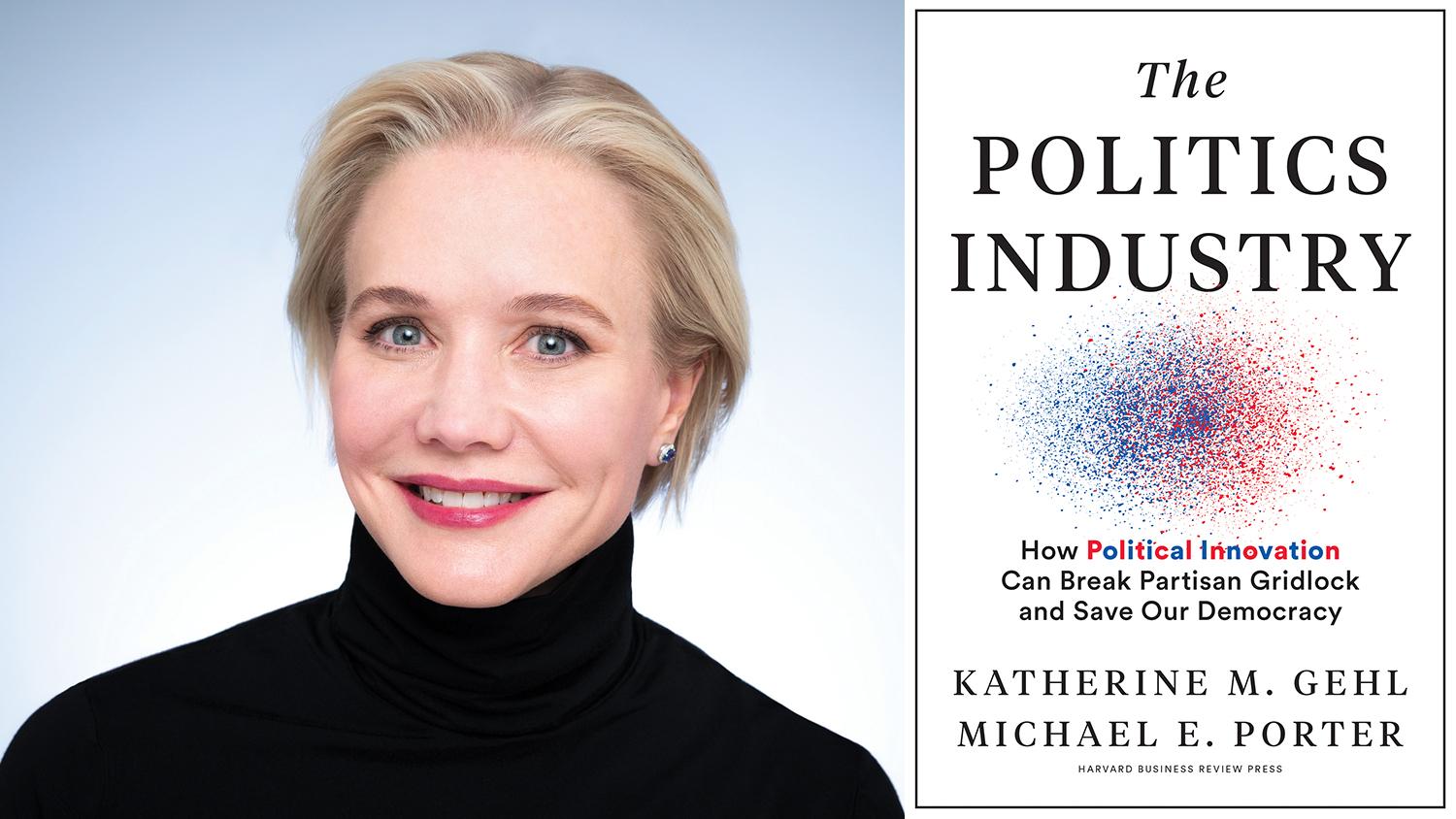 Harvard Business Review Press
Katherine Gehl and "The Politics Industry: How Political Innovation Can Break Partisan Gridlock and Save Our Democracy," a book she co-authored with Michael Porter .

KATHERINE GEHL: The difficulties that we see so pronounced right now actually tell us that the time to change was, you know, a few decades ago. And I don't mean that flippantly. I mean to say that as much as the virus may be chance, the racial equity issues certainly are not. And our response to the virus is not. Which is to say that we find ourselves in such difficulty, in part because of all the things we haven't fixed and because the capabilities we don't have. So we don't have a resilience as a country or as a government, really fundamentally because our political system isn't designed to solve problems. So given that we didn't fix it before, there is no time like the present. We can't afford to go on as, as we are.

STEVE GOLDSTEIN: So can we, can we lay out the basis at this point? Who benefits from the system as we currently have it? Certainly it seems like the two major parties do. But is that right? And who else would?

GEHL: What we see when we look at politics as an industry is a unique view on who is really benefiting. So we will des — we describe it in the book as the "political industrial complex," meaning it's not just the two parties that are benefiting, it's everybody who's in that industry, who — the consultants, the pollsters, the media, the lobbyists — everybody that is working their jobs and getting the revenues for their companies based on what's happening in politics. And the system — the industry of politics is actually thriving. The revenues, the power, the growth are bigger than ever, even as the American public has never been more dissatisfied. The core question that we ask in the book is, “What would we have to change in the politics industry so that the fortunes of the industry — how well everybody was doing in that industry — was actually connected to how well our politicians were doing at solving our problems?” And right now, those things are completely disconnected, which is why so many people are frustrated and, and really, you know, united across ideology in this idea that Washington, D.C. is broken.

GOLDSTEIN: Are we in a situation now where money dominates politics to such an extent? Can we limit that without it being, let's say, just a public financing system versus a private financing? How do you see all that?

GEHL: Money in politics is a huge problem. But very interestingly, sometimes going directly at a problem is not way — is not the best way to fix it. So the reason why money, why there's so much self-interested money in politics, is because it gets a great return on investment, meaning people feel they get what they pay for, shall we say.

GEHL: And the best way to diminish the importance of money in politics is instead of just artificially getting rid of it, which won't really work, and we would need a constitutional amendment, and money tends to find a way — there are all these problems with that. What we need to do is make votes more important than money. In the politics industry, there's really two currencies. Some customers pay with votes so that, you know, the regular public that's voting, we all pay with our votes in a sense. And some customers pay with money. And the reason money has so much power is because votes have so little power. So we need to change— the only votes that really mean a lot to the politicians receiving them are party primary votes in whatever party the district is predisposed to elect. So voters who vote in a Republican primary in a red district — those votes mean a lot. But no one else's votes mean anything, virtually. So when we change the voting system, all of a sudden the votes become so important. And the fact is that people won't put money into something where they won't get a return. And politicians won't do things for money if they can't get reelected. Right now, reelection is so guaranteed in a sense that if you stay, you know, to the right, if you stay in line with where your party's primary voters are, that the rest of the voters don't matter. And the other thing is, right now, you can get reelected even if you don't deliver results on either side, because no matter how disappointed a particular voter is, they likely still prefer what their side says they're for than what the one other side says they're for.

GOLDSTEIN: Do you think, in part, because we have so many people who are frustrated with their parties, their previous parties, for whatever reason, that this could be a really ripe time to appeal to many of those people who are independents to think about the party system and think about electoral politics in a different way?

GEHL: Yes, we can appeal to independents, which, as you're noting, are now nationwide — a larger group than either the Democrats or the Republicans. So we can appeal to them. And let's also remember that even when people identify with a party, many of those people are identified because they like the ideas of the party, but if you look into it, they will end up agreeing that their party doesn't really deliver those things in the end. So it's, it's really exciting, Steve. We are getting enormous support from across the political spectrum. You know, all around the country, it's a new age of political reform, what I like to call political innovation, because people are coming together and saying, "You know, we might disagree on policy, but we really can agree on the rules of the game that would allow us to work together the way we need to do in this democracy."

GOLDSTEIN: That's Katherine Gehl. She's coauthor of the new book "The Politics Industry: How Political Innovation Can Break Partisan Gridlock and Save Our Democracy." Katherine, thank you for the conversation and stay well.