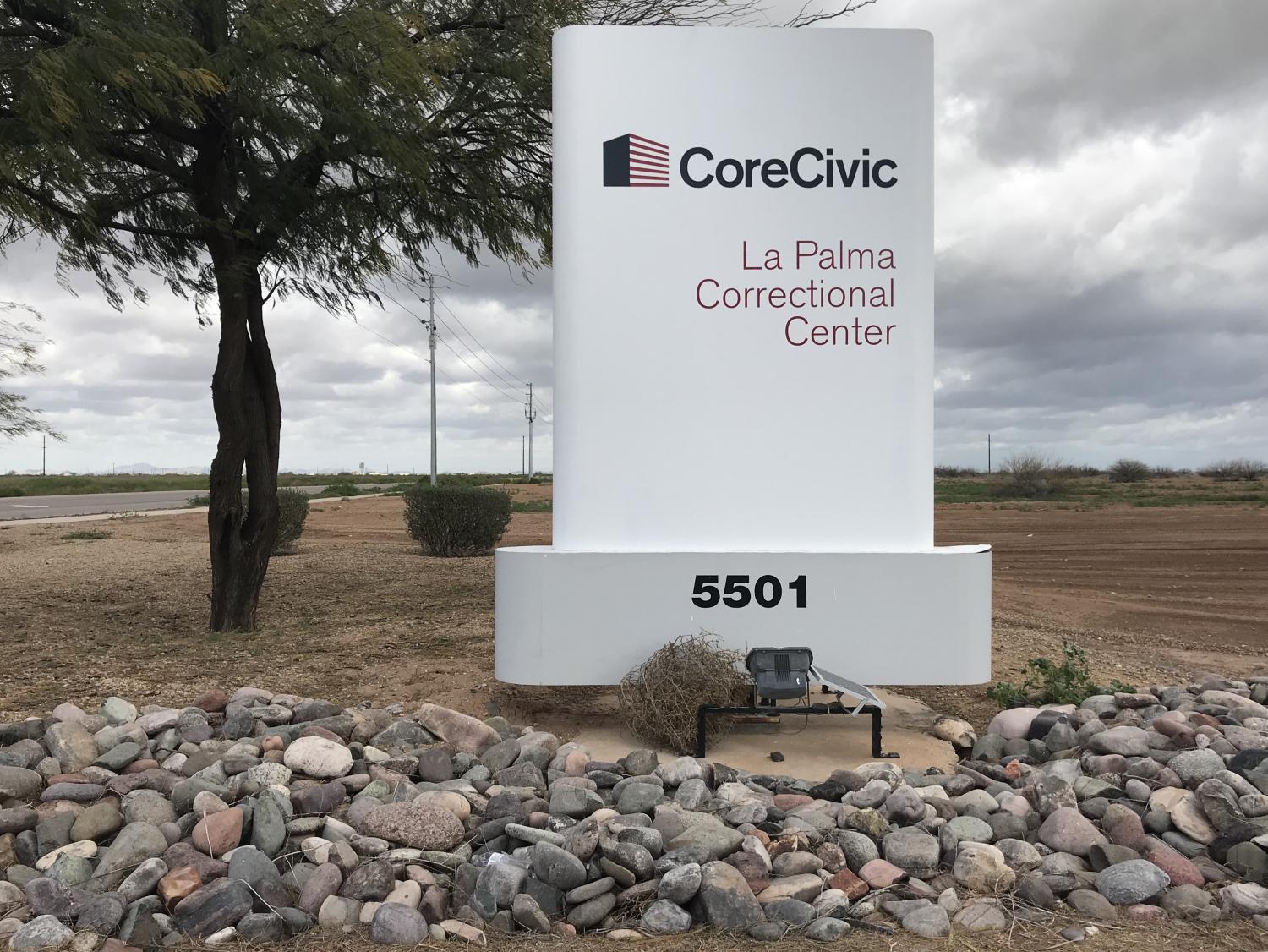 Matthew Casey/KJZZ
The entrance to the La Palma Correctional Center in Eloy, Arizona.

LAUREN GILGER: As the coronavirus has continued to spread here and around the country, some of the most vulnerable people to exposure are those behind bars. In the La Palma Correctional Center in Eloy, Arizona, [U.S.] Immigration and Customs Enforcement (ICE) has now confirmed a total of 366 cases of COVID-19 among its detainees. [EDITOR'S NOTE: After this segment aired, ICE reported 377 total cases.] Eleven of those cases are currently under isolation or monitoring, according to ICE. Three-hundred-sixty-six cases makes it the highest number of any detention center in the country. These are not inmates convicted of a crime, but migrants who are being detained while their immigration cases play out in ever more backlogged courts. An ICE spokesperson told KJZZ in a statement that the majority of those positive cases were asymptomatic and the result of expanded testing at La Palma, which included over 1,000 detainees. But advocates and attorneys with access to detainees say ICE isn't doing enough to stop the spread in these facilities. I spoke with Rocio Castañeda, advocacy attorney with the Florence Immigrant and Refugee Rights Project more about it.

ROCIO CASTAÑEDA: One of the problems that we have seen from the beginning is the significant delay in providing adequate testing. Before even ICE publicly announced the outbreak in La Palma, 200 and plus cases at the end of August, we started receiving phone calls first from our clients expressing concerns about La Palma filling up with new arrivals, new detainees. Masks that were distributed back in May were torn from constant washing, and the facility was not providing new ones. Staff continuing to lower their face mask while interacting with detainees. So we started seeing these concerns, and then days before ICE announced the surge, many clients had already called us worried that they had been tested, that hundreds of detainees had tested positive, that there was movement of, of detainees who tested positive but then days later, they were returned without any explanation, and that there was a lot of chaos.

GILGER: So what are you hearing from clients? Like what kinds of COVID precautions are they reporting that are being taken within the, within the detention centers?

CASTAÑEDA: Very little. What we're hearing from clients is that there's very inconsistent supply of cleaning supplies, there's still unsanitary conditions — especially for those in medical isolation, which is very, very concerning because you have someone who has tested positive for COVID, someone who is recuperating. And what they were reporting is very unsanitary cells — dirty cells — being locked up for more than 23 hours a day. So they're only let out 20 minutes a day and they have to choose between calling their loved ones or showering. So sometimes we hear that they go days without showering, among other things.

GILGER: Have there been any deaths due to COVID-19 reported in detention centers at this point?

CASTAÑEDA: There have been many throughout the country, but not any here locally in Eloy.

GILGER: OK. Remind us, though, also, like immigrants that are being held at these detention centers have, have not gone through the court process yet, right? They've been convicted of no crime.

CASTAÑEDA: Exactly. They're civil detainees. They're civil detainees who have not been convicted of any crime. Many of them have lawfully presented at the border seeking asylum and are awaiting their day in court. But their day in court is not coming and has been significant — like, delayed and delayed. We've heard time and time again from clients calling us about their, their case being continued not just once — multiple times because of the many quarantines. And this could be different, right? These are people, many of whom had sponsors, who are green card holders, who are U.S. citizens, who are willing and able to take care of them while they continue with their case outside of detention where they can safely quarantine, safely isolate.

GILGER: So one of the big stories that we're hearing in the news right now is about this accusation from a whistleblower, a nurse in a detention center in Georgia, who alleges some pretty, pretty serious things in terms of medical neglect, but also unnecessary hysterectomies being performed on women in detention centers. Does this tie in to you? Are these at all related in your mind?

CASTAÑEDA: Definitely. I think many of the allegations in that complaint are strikingly similar to what's happening here locally from unsanitary conditions. Employees of CoreCivic working while displaying COVID-19-like symptoms, threatening of detainees with solitary confinement for speaking out. And I think also the larger problem is these systemic issues that allow these violations of medical neglect to happen. And although we haven't seen precisely the hysterectomies here locally, we think that our clients are very vulnerable to this egregious violations. And we do see some cases of medical neglect. Some of the systemic issues are, for example, our clients tell us that they're often left in the dark about medical treatments. They're not provided with interpreters, they're not provided with test results. They're ignored when they press the cell's emergency button when they're in physical pain.

CASTAÑEDA: So what are you with the Florence Project calling for in terms of change here? What would you like to see happen?

CASTAÑEDA: Release. We think that the only solution is to release. There are alternatives to detention. We have seen release even in ankle monitors, with check ins, with ICE, orders of supervision. There's, there's many tools that ICE can use to ensure that detainees continue to present at their hearings. And because ICE has not released our clients here locally, the Florence Project has filed two lawsuits asking for the release of medically vulnerable people from Eloy Detention Center and from La Palma Correctional Center. Unfortunately, the district court has not ordered release, but that's precisely what we're seeing. We're, we're saying that CoreCivic and ICE have not taken the necessary precautions to protect our clients from the spread of COVID and that they're very vulnerable to severe illness or death if they continue to be exposed to COVID inside of the detention facilities.

GILGER: That is Rocio Castañeda, an advocacy attorney with the Florence Immigrant and Refugee Rights Project, who works with detainees within these detention centers. Rocio, thank you so much for the time and for coming on The Show.

CASTAÑEDA: Thank you. I appreciate it.

GILGER: ICE did issue a statement to KJZZ in response to this story and said it regularly evaluates its detainees based on [the Centers for Disease Control and Prevention] guidance for those who might be at risk for COVID-19 to, quote, "determine whether continued detention is appropriate." Their mitigation efforts include, the statement says, alternatives to detention programs, cohorting, isolation and social distancing. ICE told us those in its custody are provided with face masks, access to hand sanitizer, and that they follow all CDC recommendations for cleaning and disinfecting. As for the story from the whistleblower nurse out of Georgia, ICE has said it will cooperate with all investigations, but denied that there were widespread hysterectomies performed there