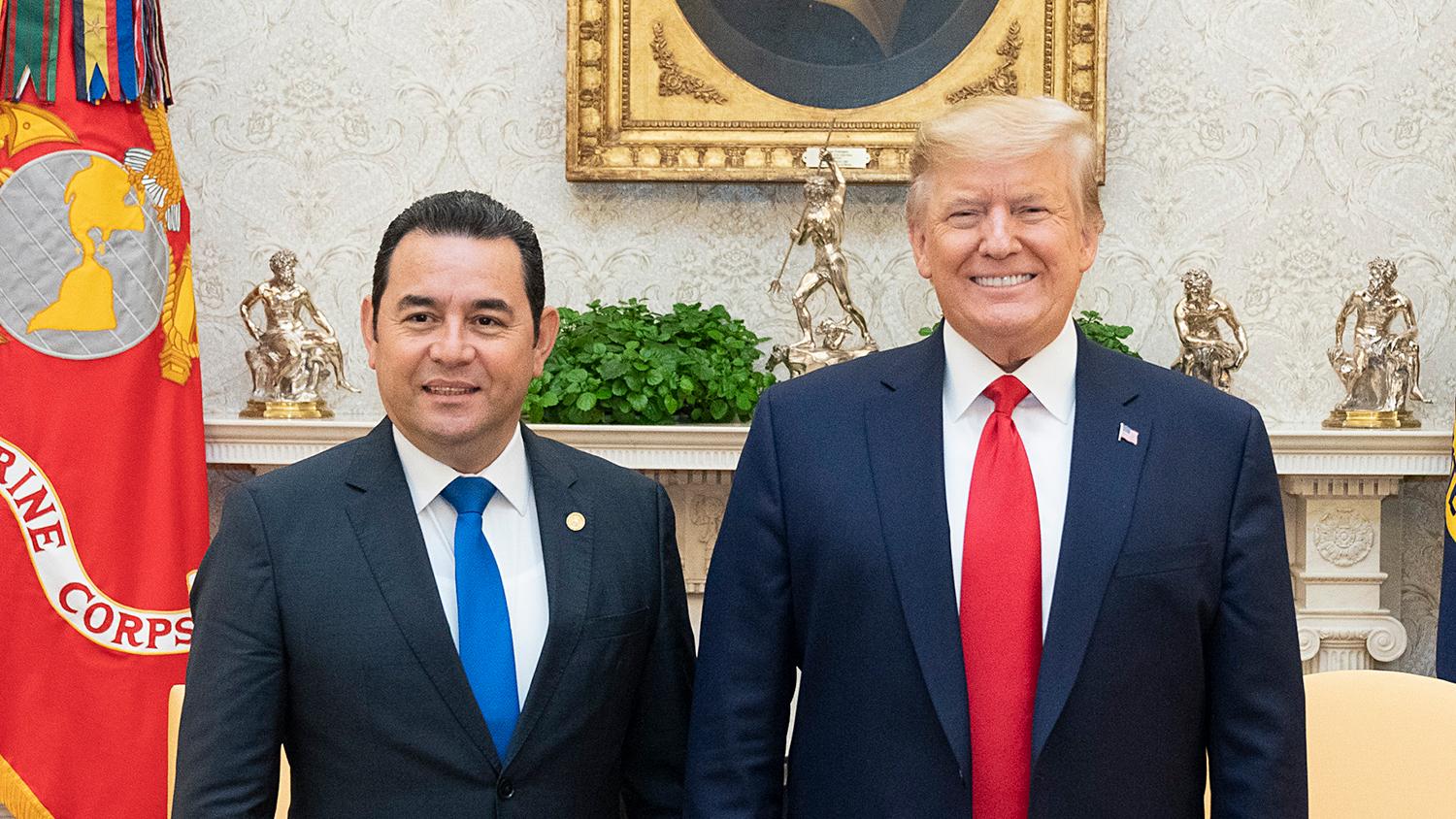 STEVE GOLDSTEIN: President Donald Trump and former Guatemalan President Jimmy Morales had a lot in common, a bromance of sorts. Both had been TV stars in their home countries before entering politics, and both felt they were being targeted by anti-corruption pioneers — Robert Mueller for Trump and a dogged prosecutor named Iván Velásquez for Morales. Our next guest joins us to tell the story of how Donald Trump helped take down Velásquez, who's known as the Robert Mueller of Latin America. Anayansi Diaz-Cortes is a reporter and producer for Reveal from the Center for Investigative Reporting, and her latest investigation uncovers the quid-pro-quo that some say set Guatemala back decades. Our co-host Lauren Gilger spoke with her more about this.

ANAYANSI DIAZ-CORTES: So Iván Velásquez is this prosecutor that worked in the Supreme Court of Colombia for many years, and he went after then-president Alvaro Uribe of Colombia, in this, what they call now a scandal called the "parapolítica" case when he gets a call from the U.N., basically asking him, do you want to run this anti-corruption commission in Guatemala, the CICIG. And he was like, "Yeah, I thought it could be an interesting experience." And as he says, you know, it turned out to be a very interesting experience.

LAUREN GILGER: OK. And then we have the Guatemalan president, Jimmy Morales, who is a comedian. You know, I know that much about him. But tell us about, about who he is and how he and Donald Trump have some similarities.

DIAZ-CORTES: Sure. So enter Iván Velásquez into Guatemala, and shortly after he starts to wiretap then-president Otto Pérez Molina and links him to fraud charges. You know, he kind of throws him in jail, and there's a void that's left. Guatemala needs a president. And then enter this kind of TV comedian superstar named Jimmy Morales, who was very famous in Guatemala. And then he campaigns kind of like Donald Trump and just being just so known, but as a star and a comedian, problematic in many ways — dressed up as a clown, makes fun of indigenous people, makes fun of Central Americans across the board. And so he runs on an anti-corruption campaign called "Ni corrupto ni ladrón" (Neither corrupt nor a thief), and there's kind of a pulling together of sorts of Iván Velásquez and Jimmy Morales and the Guatemalan Congress.

GILGER: And then Donald Trump comes into the picture. And at the heart of the story, you say there's an alleged sort of quid pro quo that sort of reminds us all here in America of the Russia investigation and President Trump's impeachment hearings last year. What was this alleged exchange?

DIAZ-CORTES: Right. So in order to kind of understand the exchange, Velásquez gets wind that Jimmy Morales, his family is involved in fraud, and he starts to go after his son and his brother. And, you know, Morales is supportive and goes on TV and says he condemns corruption and upholds justice. But, but Velásquez wants Morales's family to stand before a judge and then starts to go after Morales for even bigger stuff like $1 million in campaign finance irregularities. And so, as he starts to get closer to the president, Jimmy Morales starts to not only ice him out, but to declare him persona non grata and demand that he leaves the country. So there's this rift that starts to happen. But at the same time, this campaign starts to brew in Washington while all of this is going down, where the Morales administration begins to work with lobbyists to send signals to the Trump administration of like, "Hey, you and I have similarities where you have Robert Mueller in the United States, and I have Iván Velásquez in Guatemala. We have a compatibility. We share the same suffering." You know, shortly after Trump announces the move of the United States embassy to Jerusalem, Guatemala backs him up immediately. So this starts kind of this, you know, what we called a bromance. You know, they really start to get along together. And what Velásquez alleges that the quid pro quo was, was, "Get the CICIG out of Guatemala. And if you can't do that, get Velásquez off of this job and get the CICIG out of my hair in exchange for an open door to Guatemalan immigration policy." And shortly after Velásquez is not allowed back into the country, we see the signing of the safe third party. So while there is not a smoking gun in the same way where there was in Ukraine or there is not yet, there is a timeline to follow that goes one after the other, after the other. And from Velásquez's perspective, he definitely alleges that there was an exchange on behalf of Morales to be like, "Get this commission out of my hair."

GILGER: Right. Right. And it happened. We watched this play out here in the U.S. on our border. Explain for us the link between sort of anti-corruption efforts in Guatemala and the immigration system that we see here and the way it plays out flows of migrants through the country.

DIAZ-CORTES: It's hard to grapple sometimes because they seem like two different things. But through the Cold War and since 1954, the U.S. has had deep involvement in Guatemala, supporting military coups there. Through the decades they've committed genocide that eradicated a generation of intellectuals. They basically created what is called the root causes of migration. And, you know, helped create what was called a failed state in the early 2000s. And what a failed state is — we can all understand this. If a crime is committed to you and you feel like you can't go to the cops, that is because of a failed state. If you are sick and you feel like you have no access to health care, that is a sign of a failed state. And then this commission, the CICIG that starts in the early 2000s, around the time Guatemala's declared a failed state — it's a way to address what's called the root causes of migration, which is a very boring labor of institution building, right? And saying, "OK, how are we gonna stop people, not stop people from going, but so much, how can people feel that they can thrive in their own country?" Well, you address the rule of law. You address institutions. You change the culture around accountability and impunity. And that's what this commission did, basically, appointed by the U.N. with money from the United States as a way to give hope to people that there is institution-building happening in their country and that someday they'll be able to stay and thrive. Right, so when you void that, when you kind of empty that out and hollow that out, the little kind of seed that was starting to sprout into a flower with this commission is now gone. And there's no chance of it coming back. So when we look at Trump and Biden and these candidates, there's two completely different approaches to addressing this, like root causes of immigration. Trump wants to build a wall and keep people out. Biden was at least on some level, which not to say wasn't problematic, but was investing in institution-building in the region.

GILGER: So in the last few minutes here, let's talk about how this played out, about the results of this, because there's sort of an irony to how it ended up, right? Like in Guatemala, how did this play out for us? Like, get rid of this anti-corruption task force. And how did that sort of reinforce feelings that Guatemalans have at about their country for a very long time?

DIAZ-CORTES: You know, people talk about this taking the country back decades, right? Because the new president, Alejandro Giammattei, was sworn in in January. And while there was some kind of, you know, hope that maybe the CICIG would be invited back in, I think what we have seen is kind of a return to the way things used to be, right? The new president has deep ties to drug mafias and former military officials. He used to oversee the prison system and CICIG did come after him for illegally killing prisoners. And since he took office, 12 human rights defenders were killed in Guatemala, others have left the country. So in some ways, it's a sense of regression.

GILGER: Yeah. So then how did this play out in the U.S. as we watched sort of the Trump administration's immigration policies play out? What's the connection there?

DIAZ-CORTES: Right. So what you have is the signing of the safe third party, which basically states, if you're coming from El Salvador and Honduras, you're not allowed to ask for asylum at the United States border unless you ask for asylum in Guatemala, which means that Guatemala is a safe country to ask asylum in. And what we asked Guatemalan officials, if Guatemala is a safe country, then why are hundreds of thousands of Guatemalans fleeing every year? So it only just deepens the need and the sense of hopelessness in Guatemala that there is only hope for me in the North, no matter what the stakes are. And on this side of the border, it just reinforces kind of this old perspective toward Guatemala, which is we support people in power that have committed grave human rights atrocities, but let's just turn a blind eye. In some ways, it's, you know, back to the Cold War era, back to 1950s, but with just an openly anti-immigrant approach on the part of the Trump administration.

GILGER: All right. That is Anayansi Diaz-Cortes, reporter and producer for Reveal from the Center for Investigative Reporting. Anayansi, thank you so much for joining us to walk us through this.

DIAZ-CORTES: Thank you so much, Lauren, it's a pleasure.