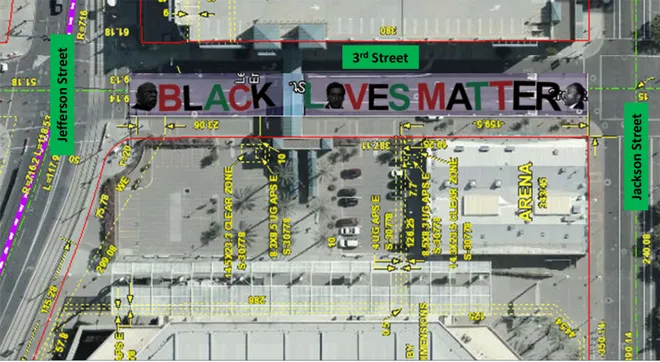 In September, the city of Phoenix denied requests for two murals to be painted on city streets. In a letter to supporters of both, City Manager Ed Zuercher cited concerns with safety and federal guidelines for markings on streets as among the reasons to deny the requests.

They include one from community organizer Gizette Knight, who proposed painting the words “Black Lives Matter,” along with images of the late Dr. Martin Luther King Jr., Cesar Chavez and John Lewis on Third Street in downtown Phoenix.

The city also rejected a proposal for a street mural that would have said, “No one is above the law,” in front of Phoenix Police Headquarters. That mural was requested by Mark Spencer, the former head of the Phoenix Law Enforcement Association, who is currently with the conservative group Judicial Watch.

The Show spoke with Gizette Knight, and asked if she was inspired to do in Phoenix something similar to what Washington, D.C., did — a Black Lives Matter plaza and the words painted on a city street.