Meteorologist: 'No Big Cooling Trend In Sight' For Phoenix 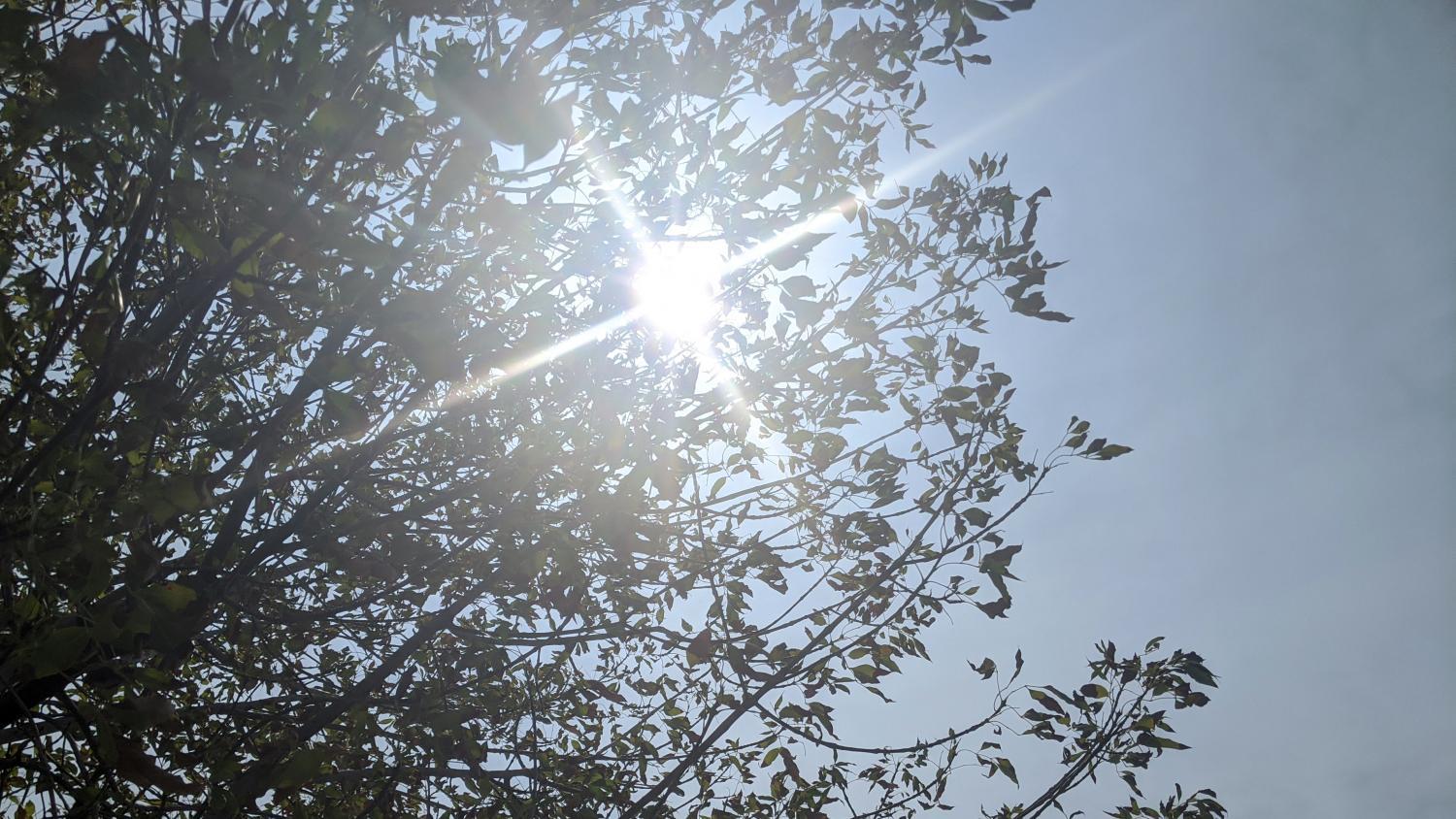 Sky Schaudt/KJZZ
The sun shining through a tree in Phoenix in September 2020.

LAUREN GILGER: Maybe it's my quarantine brain, but what month is it again? Did, did Bruce say at the beginning of the show that it was 75 degrees outside?

STEVE GOLDSTEIN: Yeah, and it's September, Lauren, just so you know for sure. But you're right, it's one of those things where, when I left for work this morning, I was slightly chilly? After all these record-shattering hot days we've had?

GILGER: I totally agree. And I hope it means that we're getting an early fall, especially since we got barely any rain this monsoon season.

GOLDSTEIN: Lauren, as you know, there's one person we always turn to when we have weather questions, and that is Matt Pace, meteorologist for the Arizona Department of Environmental Quality. Matt, good morning. You have your sweater on this morning?

MATT PACE: Good morning. You know what? I almost did open the windows and put the sweater on, because yeah, it did feel a little chilly out there.

GOLDSTEIN: So Lauren and I are joking a bit to say that it's cold weather. But if you're out at six, 6:30, it, temperature's in the 60s. Where's this coming from?

PACE: Oh, yeah, for sure. I mean, it was 69 degrees this morning at Phoenix Sky Harbor and some of the outlying areas were down into the lower 60s and even the high country below freezing this morning. And it's all a result of a pressure cheese that we had — high pressure had been sitting over the region just basically baking us with those 110 degree days. Now, we actually had a very strong cold front, actually, swept through the region two days ago, bringing us all this really nice, cool air.

GILGER: But this, I take it, is not going to last long, just based on our luck this summer?

PACE: Unfortunately, that is true. It's not going to last too long. So enjoy the 90s while they last, but probably by Saturday into Sunday, we're gonna be right back in that 103 to 105 degree range, which is still a little cooler than what we saw last week, so still good news.

GILGER: Is there any hope then that fall might be coming early and giving us a little bit of a respite after this incredibly hot summer?

PACE: Unfortunately, when we look at it, La Nina is now here, though the water has cooled down enough that we can officially say La Nina's here. And that typically means it's going to be warm and it's going to be a fairly dry winter. So it does look like we're probably going to continue those 100-degree days through, you know, the last part of October, and then we'll slowly start to cool it off. But unfortunately, no big cooling trend in sight.

GOLDSTEIN: Did you say last part of October? Excuse me?

PACE: I know. Right? Now the average last 100-degree days like Oct. 3. But the way we've been going lately and looking at the pattern, I wouldn't be surprised if we see hundreds into the mid to late part of October, unfortunately.

PACE: Let's, let's go a little lower than that. The latest ever was Oct. 27. But, you know, probably still in the 90s if you look at the pattern. But of course, there's a lot of times things can change. But for the most part, your best bet is to say it's probably going to be warm.

GILGER: OK. Matt, I want to talk about the monsoon season or the "non-soon" season, we've heard people call it this year. We didn't see a lot of rain last year, if I can recall correctly, either. Is this something we should worry about? Are we going to not have this season like we used to?

PACE: So it's certainly something that I think we'll look at for sure. I mean, we've got two years now that have been incredibly dry. Phoenix has only seen 1 inch of rain. Flagstaff is probably going to come on its driest monsoon again. And it's all about the position of that high. It just hasn't been positioning where we've seen it in years past. And it, is that a change in general? That's something we're going to have to kind of see over the next couple of years, because obviously weather is those day-to-day changes. In climate, you really got to look at a 30 plus year average. But it is certainly a trend that we've seen over the past two years, and it's one that we hope starts to break down. At least our fingers are crossed.

GILGER: So no hope then, I take it, for some late season storms here in the last couple of days of the official monsoon season.

PACE: Yeah. And what we typically see this time is we want to see that tropical moisture come in and then we have these troughs and cold fronts move through to interact with that moisture. Unfortunately, we're not seeing much of that tropical moisture that's going to come in from the south. So it's probably going to be a dry end to what you could, I guess, say we had a monsoon this year. Fifty-six percent of the state's now in severe drought. So it was a bad one this year for sure.

GOLDSTEIN: And it turned so quickly. Matt Pace, meteorologist for the Arizona Department of Environmental Quality. Matt, thank you as always. Take care.