How Extreme Temperatures Will Affect Densely Populated Cities In The Future 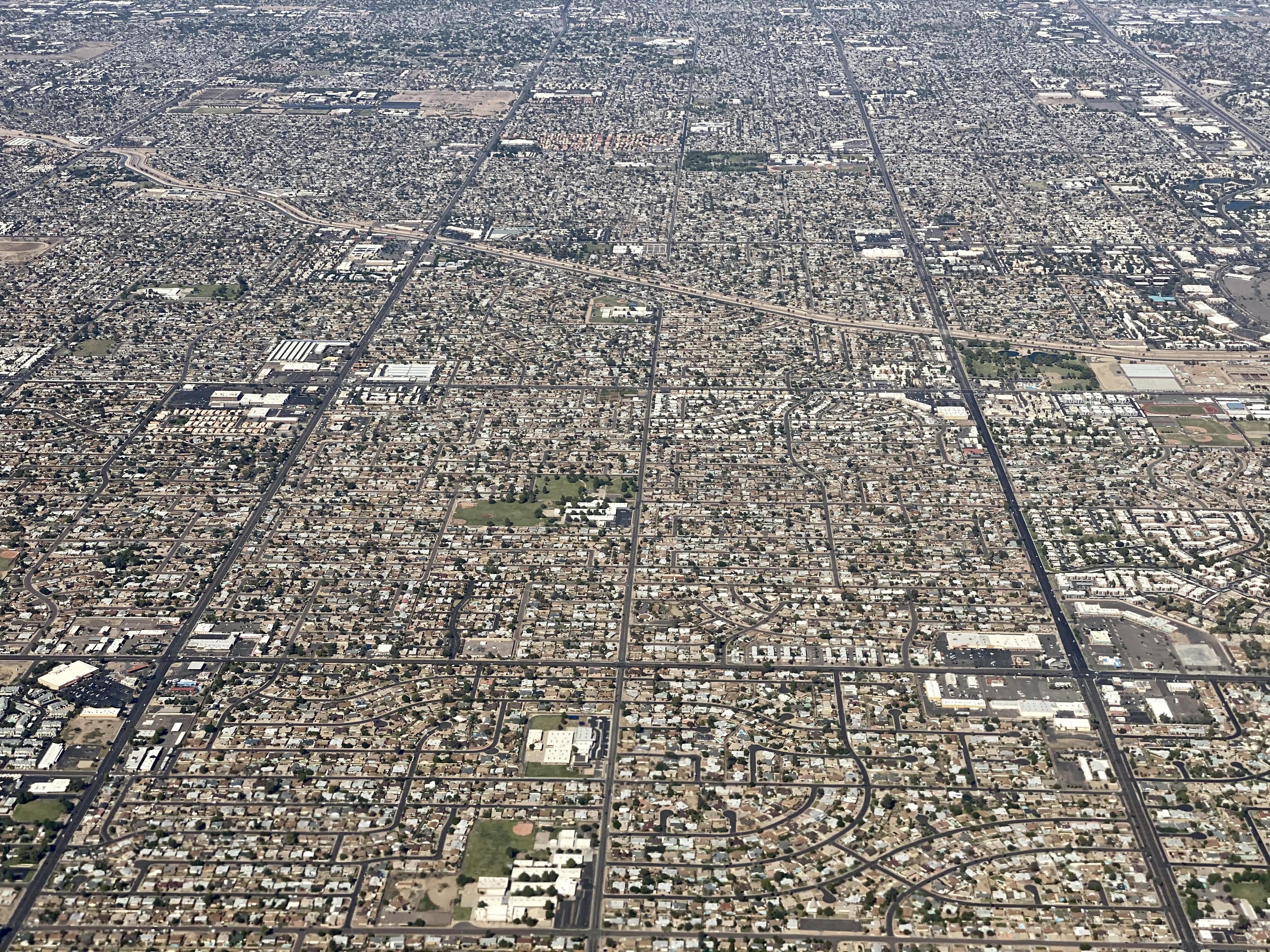 Carol Harvey/KJZZ
An aerial photo of Phoenix in 2019.

STEVE GOLDSTEIN: The Valley's extreme heat continues today as this is one of the hottest summers the area has ever experienced. But the problem is not short-term. Scientists expect the impact of climate change to be felt even more deeply in the future, and the Southwest is at the center of that. A team of researchers led by ASU focuses on how extreme temperatures are going to affect Americans, particularly in denser cities. The factors they considered included the urban heat island and climate change. Earlier, I spoke with Ashley Broadbent, research professor with ASU's School of Geosciences and Urban Planning, about the research. I began by asking how his team decided to approach the broad topic of extreme temperatures and increasing heat.

ASHLEY BROADBENT: There's been obviously a lot of research on how climate change is going to affect extremes. But probably what was missing, I think, in a lot of the climate research in the past was that really human element. So our team was particularly interested in thinking about how changes in climate extremes, like more heatwaves and things like that, will affect people. And so to do that, we had to take into account a couple of other variables of factors, including population projections and understanding where extreme heat will overlap with changes in population during the 21st century. So I think a key element of the novelty of this work or what makes it interesting and new is our, our human element focus in terms of understanding the implications of changing climate for people.

GOLDSTEIN: We certainly had seen increasing density and seeing certainly younger people, there's been a lot of discussion about moving more into cities, obviously increasing density, and I suspect that would increase effects of heat, how much heat is generated in a city. Are we going to see more and more people affected by extreme temperatures as more of us perhaps are clustered together? And, and, and are these challenges much more felt in an inner city as opposed to a suburban or rural area?

BROADBENT: That's a great question, Steve, and that really goes to an important part of this research. We didn't just account for global warming driven by greenhouse gases, which we often think about when we think about climate change. We also accounted for the fact that cities are hotter than rural areas. So cities have lots of concrete, they have less trees, they have asphalt, they have buildings and things like that. And all of these structures absorb heat. I'm sure you've experienced a hot road in Arizona on a 115 degree day. That road is going to be very, very hot. And so cities create their own microclimates. They create warmer temperatures locally. And so you're right, by the fact that people — more and more people — are living in cities is increasing this exposure to heat problem that we're addressing here. And our, our study directly accounts for those effects, including the fact that more people are moving into cities, and the fact that cities themselves create a local warming effect. So, yes, cities are very much at the forefront of the climate change problem in that regard.

GOLDSTEIN: We think about socioeconomics so much, and I wonder if there's a fear of there being a have and have not. That maybe people who, who have will be better able to deal with extreme temperatures than those who have not.

BROADBENT: I think that's all extremely relevant. And we didn't go directly to what cities should stop doing in terms of adapting to these extreme temperatures, but there are things that can be done by cities at the local scale, and that's something that we want to do in future research. So a good example is in California, some of the building codes now require new rooftops to be of a certain reflectivity. So you paint them white and they basically absorb less sunlight and so they don't get as hot, and that can reduce those local heating effects that we see in the city and it can cool down the city locally. So there are actions that we can take to reduce the effects of heat in our cities. There are things happening in Arizona, also, including the city of Tempe, which is, has a 25% tree canopy target, which will also help to cool down the city if they're able to, to realize that target. And you're also right to point out that there will be haves and haves not — haves and have nots. We, we already know through research that certain populations are much more sensitive to extreme heat when all of those factors mean that certain populations, certain sociodemographic populations, are going to feel the effects of climate change and extreme heat more than others. At the local level, when we stop planning these cooling and interventions, we really need to be thinking about how to protect the most vulnerable too.

GOLDSTEIN: A place like Phoenix where the average high temperature on a day like this in August is probably between 105 and 108. In essence, to some extent, people are used to it as long as they're not exposed too much, obviously. And our technology, perhaps, is used to that. We're seeing in California right now extreme temperatures where we're seeing — when you're looking into the research you've done, how much of a difference does that make for a place like Phoenix, that even if we're not making all the right choices, maybe there's been a thought about this for a lot longer, as opposed to other cities, that maybe their normal temperature is 78 now, right now it's 96 and they're not quite sure how to how to deal with it quite the same way.

BROADBENT: If you start to look at the threshold temperatures at which people start to suffer from heat stress and heat stroke and, and have to go to hospital for heat stroke, those temperatures are much higher in a place like Phoenix. Our, our population in the Phoenix metropolitan area is much more well-adapted to extreme heat than somewhere like Pacific Northwest. So there are locally specific thresholds with which heat becomes a problem for different communities. And that's partly physiological and partly technological. You're right to point out that Phoenix may in many ways the well-prepared for the climate crisis because our climate is already very extreme.

GOLDSTEIN: That is Ashley Broadbent. He's an assistant research professor in ASU's School of Geographical Sciences and Urban Planning. Dr. Broadbent, thanks so much. Great to talk with you.

BROADBENT: Great to talk with you. Thanks for taking an interest in our research.