LAUREN GILGER: Today marks the two-year anniversary of Arizona Sen. John McCain's death. The late senator's legacy has loomed large here in our state, where he served in public office for more than 30 years, as well as in Washington since his passing. At last week's Democratic National Convention, his wife, Cindy McCain, spoke in a video about his close across-the-aisle relationship with Democratic presidential nominee Joe Biden. This morning, she posted a tribute on Twitter saying, "This country misses your strength and honor. But we all will do our best to keep your legacy strong."

STEVE GOLDSTEIN: The Republican National Convention continues today with millions of the party's members virtually cheering on President Trump. But groups like the Lincoln Project and 43 Alumni for Biden, which include longtime Republicans, have been working against the president's reelection for many months. And another Republicans for Biden was announced this week. One of the boldface names in that group is Arizona's former U.S. Sen. Jeff Flake. On Monday, Flake announced his endorsement of Vice President Joe Biden, saying it was the first time he'll vote for a Democrat for president. Earlier, I spoke with former Sen. Flake and asked him how much his support for Biden is predicated on his belief that President Trump has sought to tear down some of the country's traditional institutions. 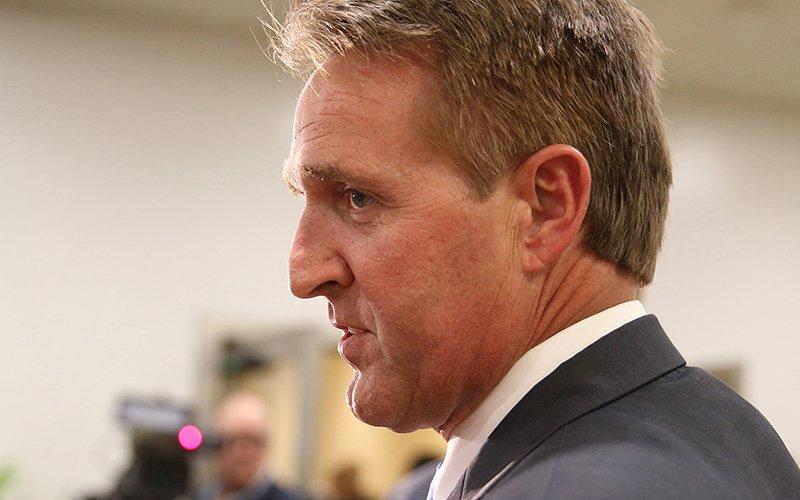 JEFF FLAKE: That's exactly it. A Conservative wants to preserve and conserve institutions, to keep what works. And these institutions have served us very well over the past 250 years. So that's — when you see Donald Trump as a candidate, it was bad enough to say, "Hey, our elections are going to be rigged." But when you you're the president of the United States and you say that, then that does real, severe long term damage — or it can — to the country. So, yeah, it's a problem. And that's one reason I support Joe Biden.

FLAKE: Yeah, I think that's it. I mean, when you have a convention and don't have one former U.S. president — a Republican who had held that office before — willing to stand up and and voice support, and you have so many and previous administrations simply won't either. And they have the number, I think it was 27 former members of Congress announced today that they would support Joe Biden. I think that is unprecedented, and I think it speaks to what an outlier, hopefully, the president is. There's simply no future here for Republicans — not just me — but Republicans in general. We are headed right into a demographic cul de sac. And this notion that after four more years of the president, that we'd somehow be in a better position to espouse conservative governance is just farcical. We're going to be in a position where the Republican Party will be largely irrelevant simply because of demographics and the president's unwillingness to try to go beyond his very narrow base.

GOLDSTEIN: Has this become much more — I mean, it's always been a game about "we have to win because you have to get the power" — but it's even more that now with putting more things aside just to get the victory.

FLAKE: Yeah, I think so. And social media drives a lot of that and kind of bifrication, cable news and then add to that Facebook and Twitter. It makes it easier for the president or those to kind of push that message that "it's now or never" or "our country will never come back, we'll be socialist within a couple of years." And I see it a lot like if there's a precursor to this — and danger for the party, for the Republican Party — and I think what we are looking at is California in the 1990s. (Republican Gov.) Pete Wilson wanted a second term. He wasn't as popular as he thought he needed to be. He espoused Proposition 187, which sounds a lot like the immigration rhetoric you hear from the administration today. And they did manage to gin up enough support and play to the base really hard to win another election. It won him a second term. But the cost long-term to the party, the Republican Party in California, has been incalculable. All you've had in the last 25 years, Arnold Schwarzenegger as a Republican, elected statewide — he switched his party later — and I think an insurance commissioner. That's it. the Republican Party is all but irrelevant statewide in California. And that, I think, is the direction we're headed if we continue to espouse the policies and the tone and the rhetoric of the president.

GOLDSTEIN: You are someone who decided again, rather than running for reelection, to get out. So the question is now a couple years later, do you think that something like this can be more impactful than if you'd tried to keep going for Senate?

FLAKE: There was no path for me unless I was willing to espouse, you know, some of the president's policies that I simply couldn't do or condone behavior that I just couldn't condone. In the end, I knew that if I were going to win reelection, I'd have to stand on a campaign stage with the president and be OK when he ridiculed my colleagues or disparaged minorities or just used childish nicknames for people. I would have had to laugh along with him or look at my shoes. And I couldn't do it. I just couldn't do it. So, you know, you're never as powerful out of office as you are in office. I wouldn't make that claim at all. But for me, there wasn't a choice there. I couldn't go on and pretend as if what I said in 2016, that aah, just forget those principles. I'll just go on and and say that the president's OK now and that these policies and this behavior is befitting of what a Republican should do.

GOLDSTEIN: You're not a prognosticator, but do you think this sign that so many Republicans who are coming out against President Trump, do you think that turns voters?

FLAKE: I do. I think it was it was a difficult proposition for the president to put together the kind of coalition that he put together to win the first time. Given that he has seemingly made every effort to not expand his base and just to play hard to the base — that's tough to do a couple of cycles in a row. With corona[virus] and with the economy, the race issues that he's not handled well — I think it's it's increasingly difficult to see him come out on top.

GOLDSTEIN: Can I ask what kind of feedback you've gotten? Have you heard from people saying "courageous"? You've heard from other people who say, You're a jerk. I don't hear from you anymore"?

FLAKE: Yes and yes. And that's what I expected. And I mean, I can only do what I think is right. And so I know that a lot of people will be disappointed as they kind of see this as "you're either for or against." I tried to point out — and I did — that Mr. Republican, Mr. Conservative Barry Goldwater in the 1990s endorsing a Democrat over a Republican running for Congress. And it wasn't because he'd traded in his conservative credentials. He simply thought that the Democrat — who eventually won, largely based on his endorsement — was only there two years. The Republicans came back. But he was looking at the long term. And I think it's a similar point today. I've voted for Democrats in the past — not for president. But for somebody who simply says "party line all the time," I just never understood that. And I think that that's not the way politics ought to be.

GOLDSTEIN: Former U.S. senator from Arizona, Jeff Flake, coming out endorsing Vice President Joe Biden for president in November. Sen. Flake, thanks so much for the time. Hope you doing well.

FLAKE: Hey, thanks for having me.