'We Are The Vaccine For Racism': ASU Gammage Director Discusses Protests, Pandemic's Impact On Performing Arts 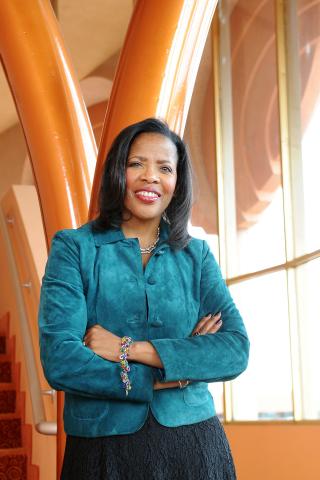 STEVE GOLDSTEIN: The pandemic's impact continues to be broad and deep, and that includes its effect on live performance and theater. Plays and musicals from Broadway to Phoenix have been canceled or in some cases, moved to strictly online options where subscribers can watch on their computers and smartphones. But it's not only COVID-19 that could lead to dramatic changes in theater. The protests and more open discussion about racial injustice have caused producers, writers and more to reconsider their approaches. Colleen Jennings-Roggensack is executive director of Gammage Auditorium and vice president of Cultural Affairs at ASU. She's also African American and is working with the Broadway League on creating more diversity in the theater industry. And she's with me to talk about these issues. Colleen, what makes you believe that this moment in time will stick that progress — real progress — will be made?

COLLEEN JENNINGS-ROGGENSACK: One of the reasons I say the iron is hot — I know there's a window. And that window ultimately will close at some point in time. But because this issue in particular, of Black Lives Matter, has not just been a state issue, a national issue — it has been a global issue. So all of a sudden, a lot more people are engaged in the movement than ever before. So that gives me great hope. I do have years of experience, so I know that the window of opportunity may be small. And so we have to stay focused on getting done what we can get done right now. Really ingraining these beliefs and, and support of equity, diversity and inclusion now, as we go on. I believe that we are undergoing two pandemics. We have COVID-19 as a pandemic, and we have racism as a pandemic. We will find a vaccine for COVID-19. We are the vaccine for racism. And it's, it's up to us to make that happen.

GOLDSTEIN: When it comes to the bigger picture of diversity, when it comes to all sorts of different theater companies around the country, when a company wants to be more diverse in the past or wanted to be more diverse in the past. "Well, you know what? Let's have a diverse play this season and we'll put August Wilson in." How do you see companies moving forward from that and, and making diversity really, you know, mean something, I guess, more than just, "Hey, we put on a play with African Americans in it."

JENNINGS-ROGGENSACK: Right. Great question, because I have a firm belief of those who choose, those who choose. So those who choose boards of directors, choose artistic directors, choose executive directors, then those individuals choose what goes on, who is the creative team and what stories get told on the stage. So one of the, the work — part of the work that we have to do is look at the very beginning and see how are we changing those boards of directors? How are we changing artistic directors? Executive directors? And then changing the stories that get told? And I don't mean changing them. I mean adding to the canon, because people have discovered, and I will go back to Lin Manuel-Miranda, that Hamilton, people did not go, "Oh, well, that's not really George Washington because he's a black guy." People went, "That's George Washington. That's who led our country. That's why we are where we are today. And that story of George Washington is my story. That story of Alexander Hamilton is my story." And that's what Lin brought us, and I think it opened up many people's eyes. I do know from the LORT theaters, the League of Regional Theaters, like our own Arizona Theatre Company, two commercial houses on Broadway, that you also have to be concerned about the economics. And I think Lin taught us that, wow. There's an economic goldmine there, because people do want to not only see their own stories, but see each other’s'. So I think the notion of we have a community that's growing at the same time and learning together at the same time will push that forward. But also actors and directors are saying we want more. One of the things that happens in all of our lives is we always are brought forward by someone who said, "Hey, I think you can do this. I'm going to take you under my wing." So one of the commitments we on the Broadway League board of directors are making is that we will also be mentors to young people. We will be mentors to young people of color because, like, if I asked you how you got your first gig, somebody took a chance on you and said, "OK." So, so if our eyes are focused on a different prize of young people of color, then we will see that relationship build and we will see people come up through the ranks.

GOLDSTEIN: So you mentioned the dual pandemics of COVID and racism. When we finally get back to theater, at least in some ways people are more used to — nice big audiences, whether we're all wearing masks or not. What does that look like to you when it comes to both of these things, both COVID, post-COVID and obviously not post-racism, but working to be better when it comes to that? How much does that change the theater as you see it?

JENNINGS-ROGGENSACK: I actually think it changes a great deal. One of the things we have been actively working on, at ASU Gammage, as well as the [COVID-19] task force I sit on for Broadway, is how to make sure people are comfortable in coming back, how people and audience members are comfortable in sitting side by side with someone wearing a mask, knowing that we've had cleaning protocols for entering the theater, for the front of house, from ticket-taking to digital programs, to concessions perhaps being outside and not inside so you don't have to stand in a line close together. And then protocols for musicians in the pit. Right now ASU Gammage is designing some national models where a musician will sit inside a pit — a tent — zip themselves up, it will be clear and they will be able to play their instrument. You know, we technically call the winds and the brass, we call them ‘spitters.’ It's not really a technical term. It's a little joke. It's an inside joke.

JENNINGS-ROGGENSACK: But the spitters will all be locked in their own space so they can spit around and it won't go out of the pit. And likewise, our audience won't be spitting into the pit. Likewise, the company members on the stage will be spitting down into the pit. So we're working on those kind of protocols, protocols for actors coming into town. We're looking at the Megas coming first, the larger, multiple sit-downs, that they stay at COVID-protocol approved hotels. They travel on buses. We will not do things like stage doors, autographs or do things such as our Talkbacks on Thursday. But what we may do is much like, we'll take a note from your book in radio and we'll do it on the radio. And so as people are driving home, they can hear me interview the performers about the performance that they've just seen. So those kinds of things will, will change in terms of physical masks, things and the emotional mess of being in a mask. I think the difficulty about racism is it's hard enough when we can see each other's eyes and each other's smile. It's a lot harder now knowing where this is going to be and, and how we maintain our closeness with not being close and not being completely visible. And I do believe it's going to make the job harder for us to talk about. But I think it will be hard and it will be difficult. And it's something that seriously we will take and how people feel even more welcomed while having to deal with physical barriers and being able to even understand each other.