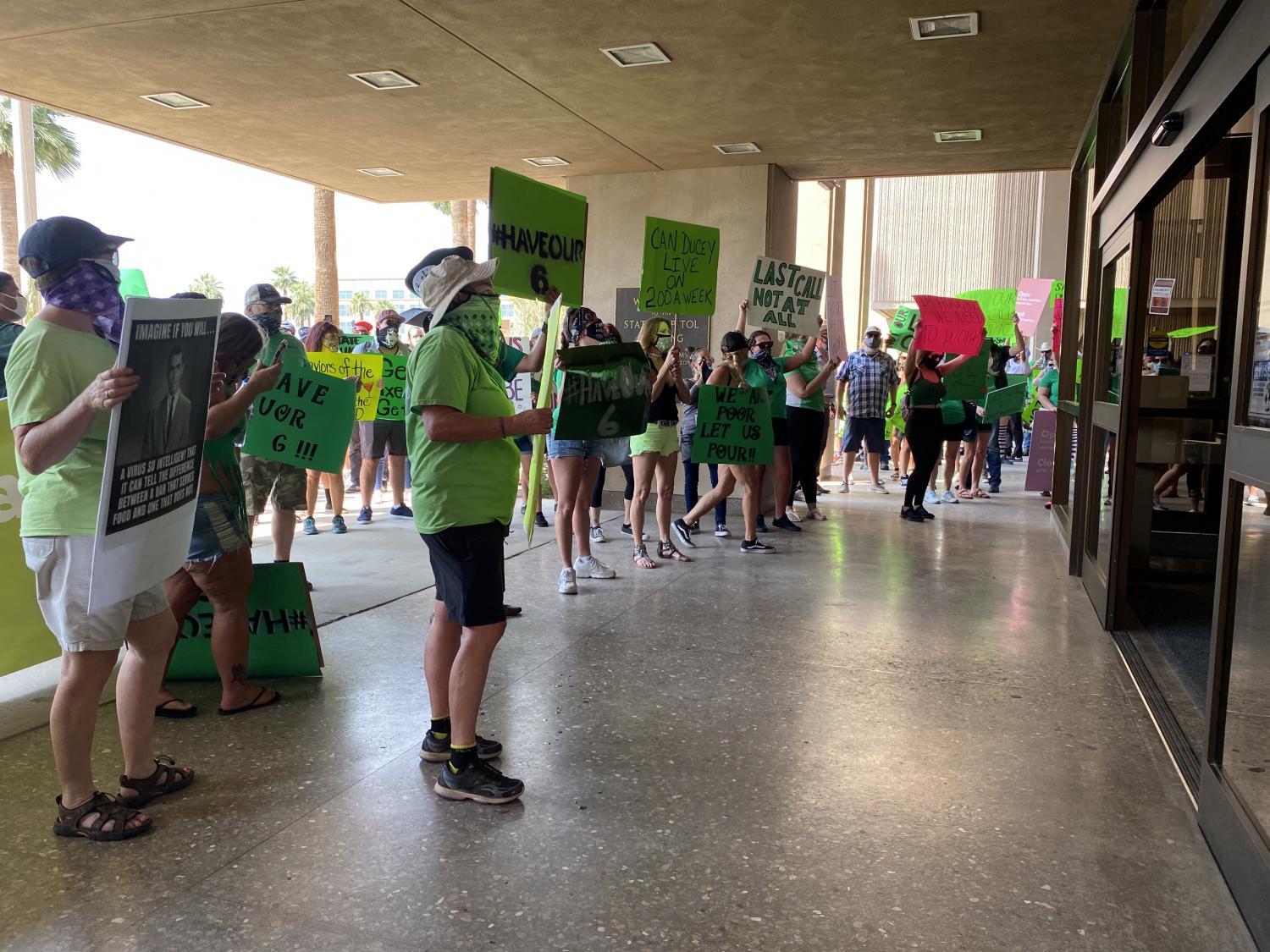 Ben Giles/KJZZ
Bartenders, bar managers and owners rallied outside the executive tower at the Arizona Capitol on Aug. 20, 2020, calling on the governor to lift orders that have kept them closed.

Bartenders and owners from around the state rallied at the Capitol on Thursday afternoon, calling on Gov. Doug Ducey to lift orders that have kept them closed for most of the pandemic.

Bars are among the few businesses statewide still subject to closure.

The governor did announce benchmarks to measure when the spread of the coronavirus has dipped to levels safe enough to reopen. But in 13 of the state's 15 counties, bars are in environments where the state still considers the risk of community spread as "substantial.''

Bars in those counties must remain closed unless they get approval of their operations by the Arizona Department of Health Services.

That's a process that has to be done one facility at a time. As of late Tuesday, some 600 shuttered businesses of all types had applied to reopen. That includes not just bars but also gyms and theaters.

There have been only 38 approvals, including five bars.

Bar owners and employees believe the closure orders are arbitrary and don’t consider the realities of what kinds of businesses are safe and which are not. 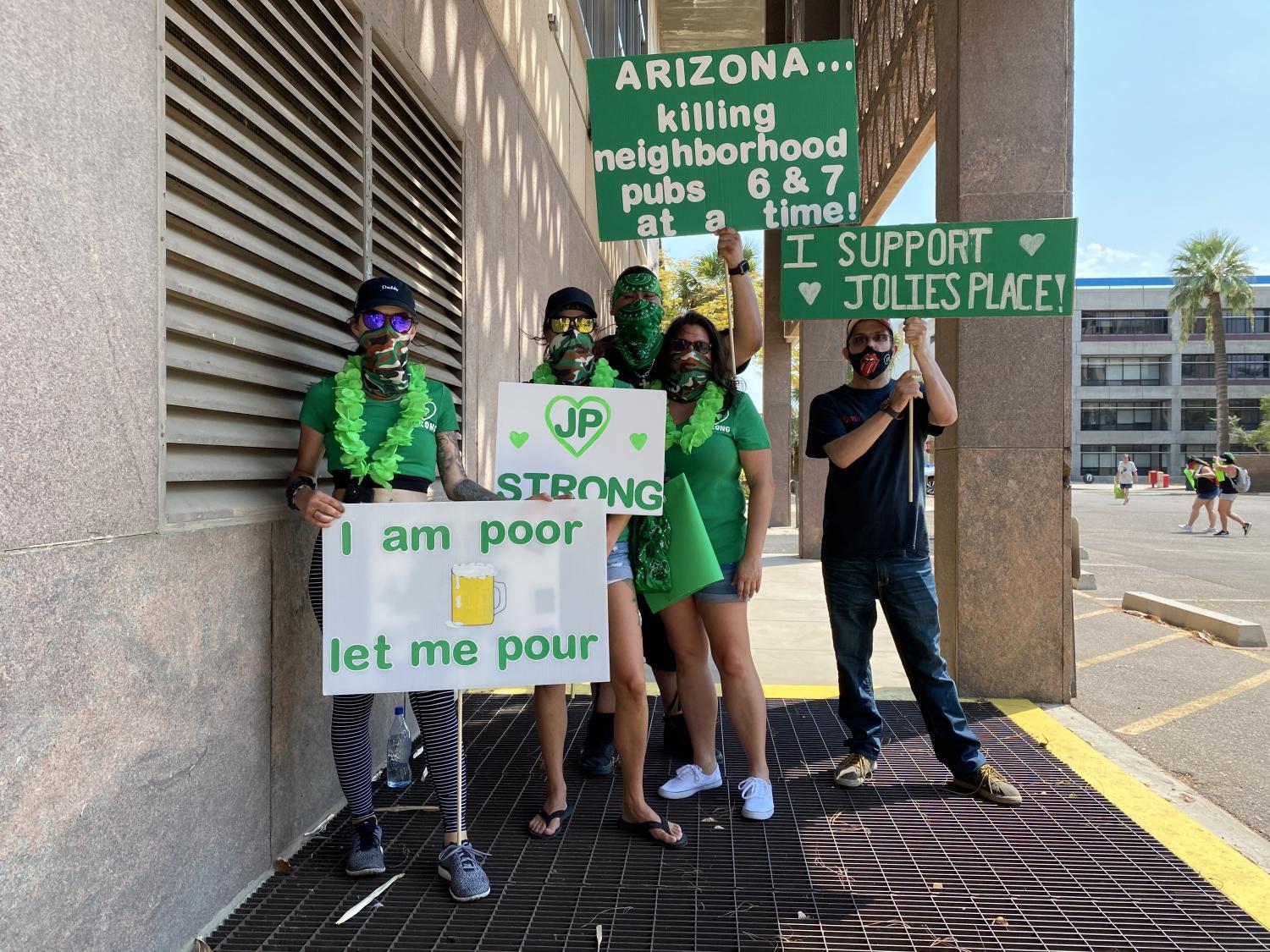 In essence, they believe they were the victims of Ducey's decision in June to re-close bars after there was a spike in COVID-19 infections, as well as highly publicized pictures of young adults packed into nightclubs, all without masks and with no social distancing.

Gina Cuneo manages Jolie’s Place, a bar in Chandler. She marched around the Capitol on Thursday, accompanied by her bartenders and a few loyal customers, chanting "not our last call." She said takeout service helped the bar stay afloat for a while — Jolie’s Place has a large food menu.

But sales are down since Ducey let restaurants bring customers back inside.

“It's a little different this time now that the restaurants are allowed to be open. There's no one really,” Cuneo said. “If you can get a drink and a burger, they're going there. They're not going to come to us for takeout. We were staying open just to keep our name out there. But it's just not fair.”

That distinction between bars and restaurants is based on what could be considered an artificial line between the two.

Under Arizona law, a restaurant licensed to serve alcoholic beverages must have at least 40% of its sales from food. Anything below that requires licensing as a bar.

There are some bars that actually meet that requirement, but the owners have chosen for various reasons to be licensed instead as a bar.

Some of that is financial: With state law limiting the number of bar licenses available in each county, that makes those licenses a commodity with financial value when an owner decides to sell.

When Ducey initially closed both bars and restaurants for in-house service, the governor agreed to waive rules and laws for restaurants to offer not just food to go but also alcoholic beverages. That allows someone to go to a restaurant and get beer, wine or even a margarita to go.

Meanwhile, the restaurants now can reopen at limited capacity, and still retain the ability to continue to sell drinks out the front door, something that, until the pandemic, was forbidden.

Cuneo and other protestors said they closely followed guidelines from the Centers for Disease Control and Prevention when trying to reopen.

Courtney Kedzierski, a bartender at the Swizzle Inn in Phoenix, said when the bar reopened before Ducey’s second closure order, she checked the CDC website daily for new recommendations.

“I don't want to be on unemployment anymore,” she said. “I want to make my own money. I miss my patrons. I think I can do it safely.”

Cuneo said she rented a storage unit to remove furniture from the bar, to ensure customers were socially distanced. But no matter what she does, Jolie’s Place has a Class 6 liquor license, and under Ducey’s orders, must remain closed.