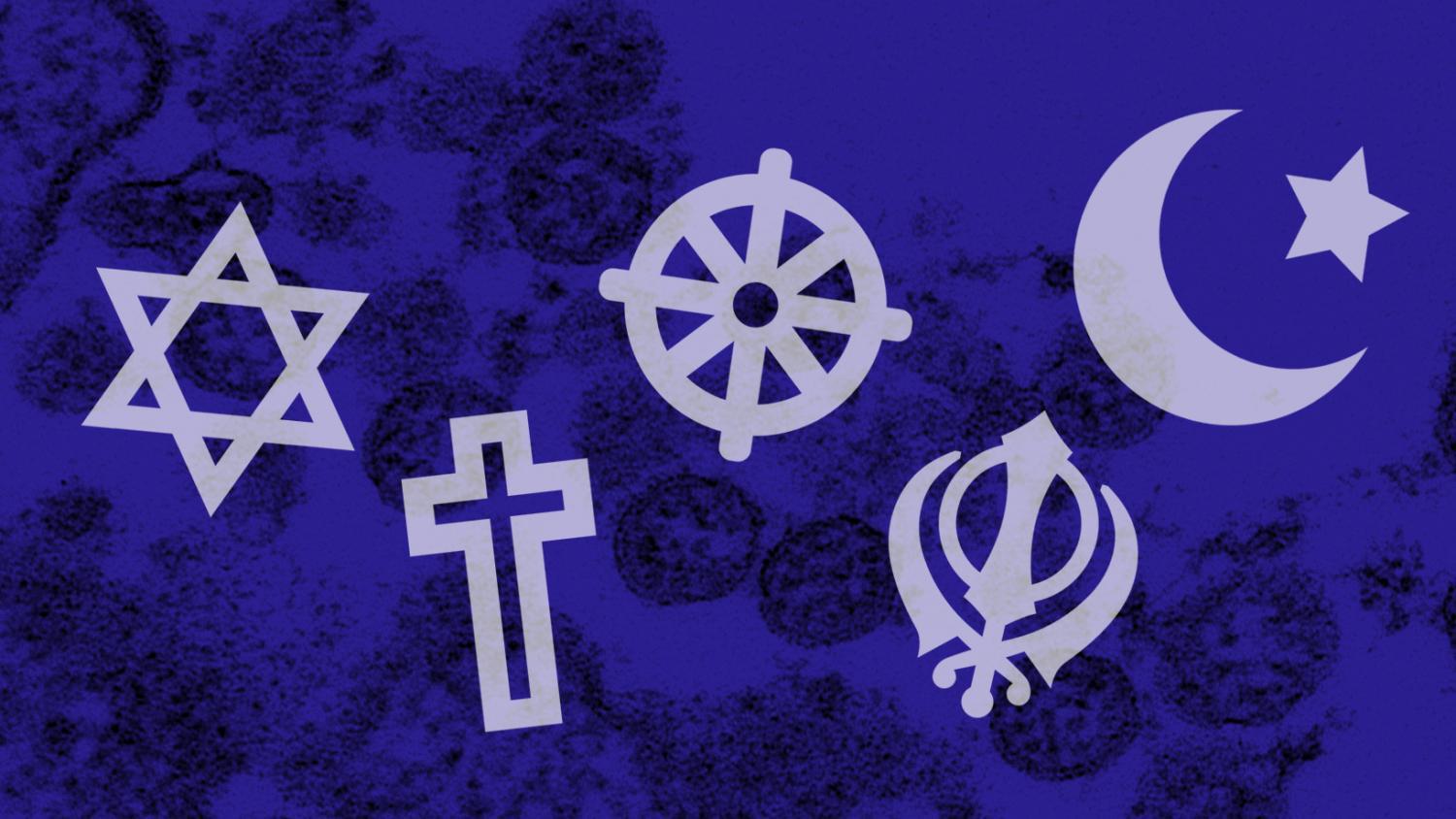 LAUREN GILGER: In March, at the beginning of the pandemic, we reached out to various religious groups to hear how they were coping with lockdown restrictions while serving the faith needs of their congregations. We are now four months into the pandemic, and it feels like there’s no end in sight. Gov. Doug Ducey allowed the state to reopen in May, and that included faith gatherings. But the coronavirus continued to surge in Arizona, causing some faith leaders to reevaluate welcoming back worshippers. Rabbi Jeremy Schneider of Temple Kol Ami describes it this way.

JEREMY SCHNEIDER: We've gone from panic mode to settling in for more of a marathon mode. And that has been challenging in of itself, whereas we would reschedule lifecycle events for a couple months away, thinking that you know, this was gonna blow over. Now we're realizing that we're in it for the long haul.

STEVE GOLDSTEIN: Video calls and other technology has been crucial in keeping religious communities connected. Rabbi Schneider says they’ve adapted various ceremonies to be conducted remotely such as “Zoom-mitzvahs.” And these digital connections have become a lifeline for his community. But people are getting tired of social distancing.

GOLDSTEIN: At the Franciscan Renewal Center in Scottsdale, the decision was made to re-close all in-person services when it was clear the virus was not contained. Father Joe Schwab, executive director of the Center, says they’ve resumed offering Sunday mass in an online format. But it hasn’t been easy.

JOE SCHWAB: One of the hardest parts for me as a priest who can't visit anyone in the hospital — even if they're dying, we can't go. So we can't be part of that now. And also, curiously, I'm finding the emotional issue of being separated physically as a community is wearing, it's tiring. And I wonder what that means for the long run, how that will develop in the human psyche that now communication and sharing are done via electronics, rather than an interpersonal experience.

GILGER: In Tempe, at the Haku-un-ji Zen Center, the decision was made early on to shift to a remote Buddhist meditation practice. The center director, Sogen Charles Billingsley, says they initially tried allowing just two people into the zendo — that’s the meditation hall. But as the pandemic continued, even that idea was abandoned. Sogen says that while Zoom meetings have allowed community members to participate in the weekly meditations, there’s something that’s missing when people are separated by a screen.

SOGEN CHARLES BILLINGSLEY: Though we're still able to practice together, you know that you aren't able to get the energy that is possible with people physically in the same space. But that's not a complaint, that’s just an observation.

GOLDSTEIN: Sogen had hoped to reopen in-person meditations this summer but is resigned to the fact that it will not happen. For now, the Haku-un-ji Zen Center is going to continue offering meditations virtually.

BILLINGSLEY: We're not in a rush to bring people back together until it's been decided, you know, by the experts and so forth.

GOLDSTEIN: But not all places of worship are closed to in-person services. In the West Valley, Nishkam Seva Gurdwara serves a large Sikh community. Before the pandemic, about 200 people would come for Sunday services. But now that’s dramatically reduced.  Only a limited number of people may attend worship in person. Dr. Jaswant Sachdev is a neurologist and a senior member at the gurdwara. He says they’ve taken steps to ensure worshiper safety.

JASWANT SACHDEV: Before a person enters in, there is a desk outside where a person has been assigned every time, who sits there, makes sure that a person has the mask before he enters or before she enters, and also watches to make sure his hands are sanitized and his temperature is taken. And they are also given some instruction as to how to sit, where to sit, what to do and what not to do.

GILGER: As with many religious communities, they have also moved to offer their services online. But more than just the usual worship services are affected. Weddings and funerals are also impacted. Dr. Sachdev says a typical Sikh wedding could have several hundred people in attendance. But now it’s limited to just 30. And after any worship service there is usually a community meal that is served where people can eat together. That has also changed.

SACHDEV: Food is put in boxes and is left outside of the door of the Langar Hall, which is actually a banquet hall separate from the main sanctuary. So when they are ready to leave they can just pick up their box. And if somebody wants to eat there we again have put a spot 10 feet apart so that they can sit about 10 feet away from the other persons.

GOLDSTEIN: For followers of Islam, some mosques in the Valley have allowed soft reopenings, while others have remained completely closed. Those with partial reopenings are limiting the number of people who can come into the mosque, and sermons have been reduced from the typical 40-odd minutes to only 10. The stress of our upended lives can manifest itself in negative ways. Imam Omar Tawil of Islamic Community Center says that he’s heard from some members who are struggling to adjust to working from home and being around family members 24-7.

OMAR TAWIL: There's been a few cases where, you know, matters of marital disputes and possibilities of divorce have come. And it really was something that, you know, I would, you know, advise and other imams across the Valley advises like, you know, take time to grow into this rather than making a decision on it so easily because, again, you know, your whole entire life just took a really big pivot, you know, and you don't want to do anything too irrational. See how you grow into it, rather than how you're frustrated with it.

GILGER: In Mesa, St. Timothy’s Catholic Church initially shifted their services to digital platforms such as Zoom or livestreaming. Since the state’s reopening, they’ve made gradual steps to allow parishoners to attend in-person services. They have limited the church’s capacity to only 25% and require masks. Fr. Shea Bowora is the Parochial Vicar at St. Timothy’s. He says people need a reason to hope, especially when times are difficult.

SHEA BOWORA: I think people need a broader horizon than just the horizon of what's in front of us. And that horizon has to come from beyond us, a supernatural horizon, if you may. And the good news is, when your hope is in something greater than yourself, like in God — specifically in Jesus Christ — when we’re living from that horizon, you can really see that, you know, no matter what happens in the world, although it's difficult or though things can be challenging, there is hope and you begin to see that that hope is playing out in one's own life. And as it plays out in one's own life, it actually translates into what we do.

GOLDSTEIN: Part of giving that hope is reaching out to the community as much as possible. Certain practices and sacraments have continued in socially-distanced ways. For those who are unable or feel the need to stay quarantined as much as possible, St. Timothy’s continues to offer livestreamed masses. And after those services, parishioners can then go to the church to receive communion up to an hour after the mass.

BOWORA: I think the importance of maintaining relationships, contact with people because this situation kind of isolates us. It's not healthy for people to be isolated. So we've been trying to really reach out to people and encouraging others to reach out to others too.

GOLDSTEIN: As the state continues to monitor COVID infections, faith leaders across the Valley continue to adapt to the needs of their congregations. And while religious services will continue to look and feel different for some time, what hasn’t changed is the hope, comfort and community faith provides.

KJZZ's Richard Copeland and Amanda Luberto contributed to this story.