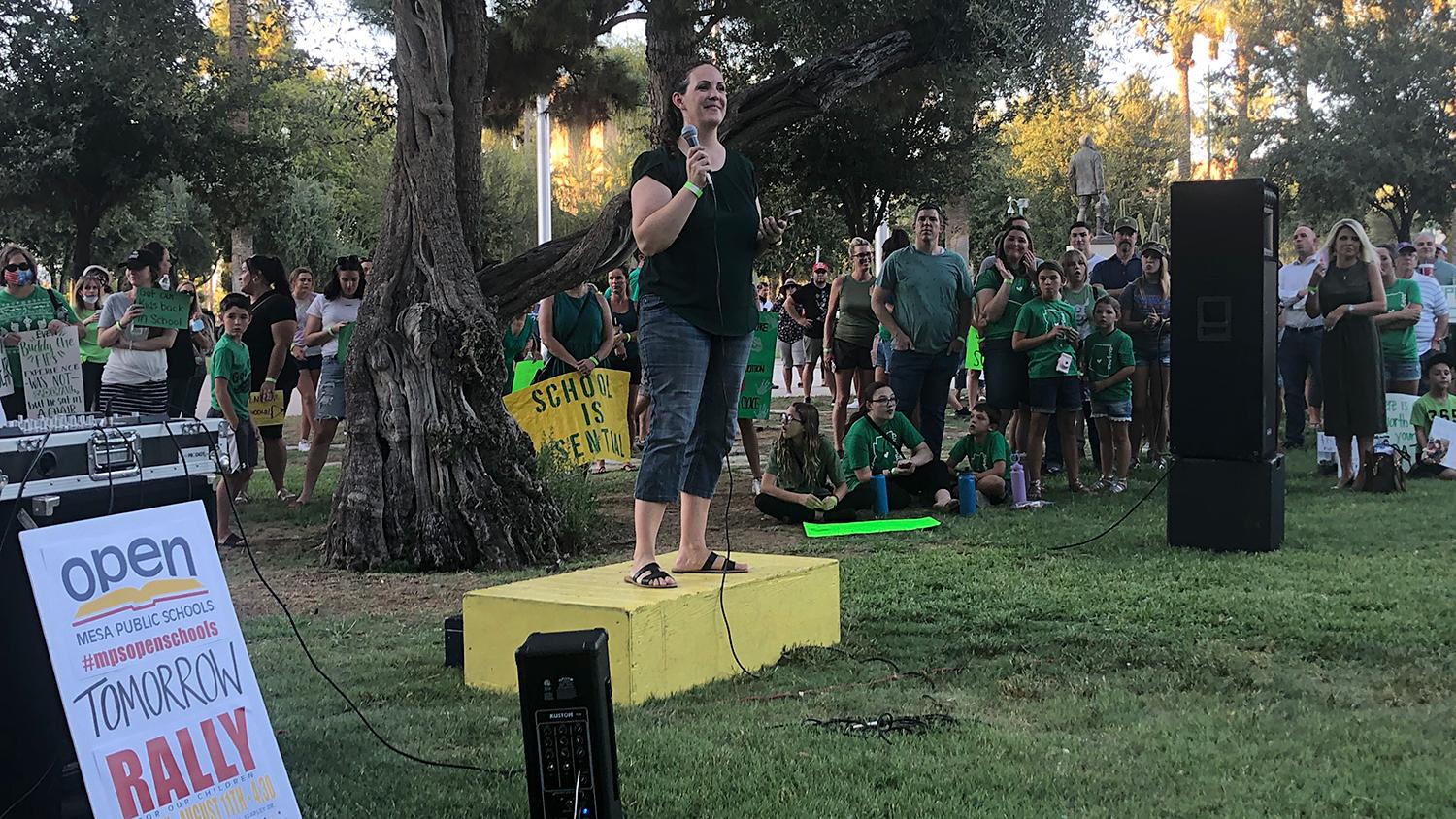 Ben Giles/KJZZ
Becca Clarkson of Mesa speaks at a rally to reopen schools at the Arizona Capitol on Aug. 10. 2020.

On Monday morning, doctors and teachers warned on reopening Arizona’s schools too soon.

In the evening, hundreds of parents and students were rallying to open schools next week.

The competing views come in response to the state health department guidelines for when and how to bring students back into classrooms, released last week.

The benchmarks, tracked by how rapidly or slowly the coronavirus spreads in Arizona, were hailed by Gov. Doug Ducey and the state’s top education official, Superintendent Kathy Hoffman. Though the benchmarks aren’t enforceable, Hoffman in particular encouraged school officials to stick to them while deciding how to run schools.

Hoffman warned that parents, teachers and the broader school community should hold school leaders accountable to the benchmarks.

The benchmarks use county-specific data to guide school officials, a system that Severance said fails to consider how the virus may spread.

“We need to have a uniform approach throughout the entire state because the virus doesn't care whether you're in the Chandler district or the Paradise Valley district,” she said. “It's going across boundaries.”

The doctors and teachers called on Gov. Doug Ducey to dictate when schools can reopen.

On Monday, evening, several hundred parents and students had a wildly different opinion on the matter. Gathered in a mostly maskless crowd at the state Capitol, the crowd cheered on speakers who questioned the science behind the health department’s guidelines, and warned that the state’s response to the virus had become worse than the virus itself.

Becca Clarkson, a Mesa mother, warned the crowd of teachers, or anyone else, who would say that it’s not yet safe to reopen schools.

“They’re telling us only (reopen) when it’s safe,” Clarkson said. “If schools reopened when it was safe, do you know when that would be? Never!”

Life is full of risks, Clarkson added, as she compared the need for teachers in classrooms to grocery store workers and medical professionals still on the job during the pandemic.

Other speakers downplayed scientific research concerning the virus and attacked the Ducey administration’s benchmarks for reopening schools as unrealistic, or unattainable.