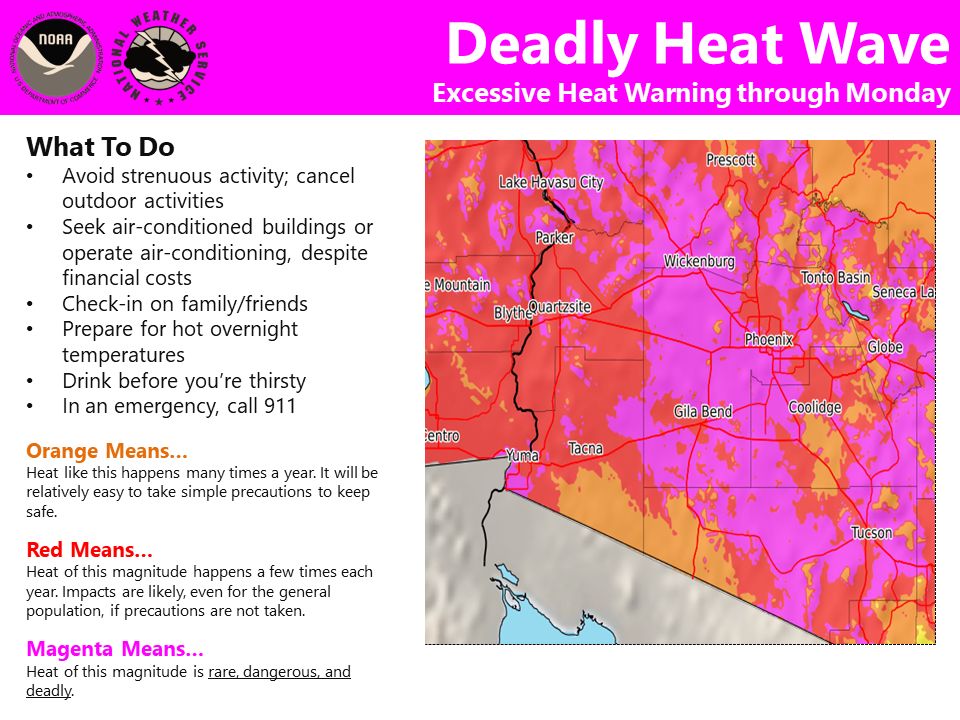 Arizonans are used to hot summers, but not the "rare, dangerous and deadly" conditions that have prompted the National Weather Service to issue an excessive heat warning through Monday.

To understand what drives these events, it's important to know that the atmosphere only seems calm. Really, it flows in rivers and boils in eddies.

Air from the sunbaked equator rises, loses moisture as it streams north and south, then descends at around 30 degrees latitude. There, it piles up in dry, high-pressure masses that form deserts and bring hot Arizona summers.

Usually, relief — and moisture — arrive from the Gulf of California right about now, provided in part by hurricanes and carried by the monsoon flow.

"Unfortunately, over the entire summer here so far, the hurricane season off the west coast of Mexico has been dead," said Randy Cerveny, a professor of geographical sciences at Arizona State University.

That means no clouds or rain to break up the heat, likely not for weeks to come.

"The key to our monsoon is actually, during the summertime, our wind patterns should shift as a result of these giant high pressure systems that are slightly moving," said Cerveny, who is also rapporteur of weather extremes for the United Nations' World Meteorological Organization.

"Well, we have the high pressure position in place, but right now it's not really driving sufficient amounts of moisture to be able to trigger thunderstorm activity."

As for why this marks the hottest July in 130 years of recorded Phoenix weather, or why the city has seen more than 15 days so far this year in which the morning low has remained above 90 degrees Fahrenheit, Cerveny says it's due to the effects of the urban heat island — partly.

"But the fact that we're getting into these persistent 115, 116, 118 days is a result of a widespread global warming. And that's something that is not only impacting us, but it's really impacting large portions of the world as well."