In the five-part series "Boiling Point: Policing In Arizona At A Crossroads," KJZZ examines policing in Arizona, from the Wild West to the current day, exploring the complex intersection between race and policing, the culture of law enforcement, the impact of modern technology — and what lies ahead. In part three of the series, KJZZ examines this pivotal moment in history for policing both in Arizona and across the country. Violent confrontations have driven outrage, protests and calls for reform. And they’ve also raised questions about the culture and mindset of police: warriors vs. guardians. 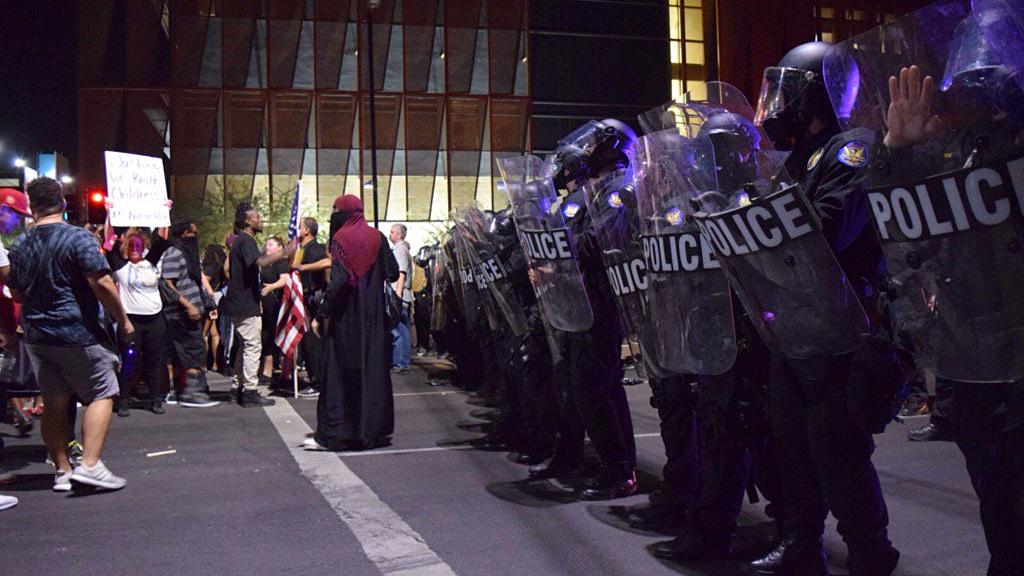 “The Andy Griffith Show” was about a small town in North Carolina. The main character was Sheriff Andy Taylor.

“So I don’t carry a gun because I don’t want the people of Mayberry to fear a gun. I’d rather they would respect me,” Taylor said in an episode.

The TV show was set in a peaceful place. It may have no bearing on big-city policing in 2020. But Mayberry’s sheriff counts as an idealized image of a guardian officer.

“I used to watch that show a lot when I was kid. He was a good communicator. He knew how to talk to somebody,” said Matt Giordano, executive director of the Arizona Peace Officer Standards and Training Board, which oversees nearly 15,000 peace officers in the state and sets the basic academy curriculum.

“But I’m telling you. There is a role for an officer to take on that warrior mentality when that needs to be taken on,” Giordano said.

This is a pivotal moment in history for policing both in Arizona and across the country. Violent confrontations have driven outrage, protests and calls for reform. And they’ve also raised questions about the culture and mindset of police: warriors vs. guardians.

In 2016, Daniel Shaver was on his knees in a hotel hallway, begging Mesa police officers not to open fire. As he crawled toward officers sobbing, he reached down in an apparent attempt to pull up his pants. He was shot five times by then officer Philip Brailsford, who was charged with murder, but acquitted.

“Once you’ve made the decision to take a human life, you are a transformed creature. You are a predator,” Dave Grossman said.

Grossman is one of the nation’s most prominent law enforcement trainers. A video named “Conditioned Response” showed the retired military officer speaking to police.

Giordano said he went to Grossman’s training years ago. But he’s not a big supporter.

“Because again, I think sometimes people take that warrior mentality too far. They don’t understand that a warrior can also be a guardian, Giordano said.

Exactly when police should turn into warriors depends on the situation, said Giordano. But it has to be done legally and as a last resort.

Joe Arpaio called himself America’s toughest sheriff, and Maricopa County voters elected him six times. He used chain gangs and boasted that his jails were like concentration camps. Arpaio’s brand stands in contrast to the guardian culture that leaders in Camden, New Jersey set out to build when they dissolved their police force in 2013 and started over.

“It was a mess, and that’s why crime skyrocketed prior to the formation of our new department,” Louis Cappelli Jr. said.

Cappelli is director of the Camden County Board of Freeholders. He led the political charge for change he said helped cause a renaissance.

“What has happened is the residents have taken back the streets,” Cappelli said.

The New York Times recently reported the situation in Camden is better, but not perfect. The headline of the story questions if what has emerged there is the key to the future of policing in America.

“My advice would be to start with the philosophy that your police department has to have the trust of its residents. And they have to respect the sanctity of human life,” Cappelli said.

The president of the East Valley NAACP said some police departments are easier to work with than others. Roy Tatem also said the warrior mentality is more common than the guardian outlook in metro Phoenix.

“The slightest thing happens, and the riot gear comes out. Sometimes I think some officers can’t wait to use it,” Tatem said.

In 2015, after the Black Lives Matter movement had erupted from a fatal shooting in Ferguson Missouri, Tatem called for more dialogue between police and the public.

“Police, politicians, regulators have not taken the proper steps to dial back the violence,” he said.

Tatem is from Virginia Beach, which is about 300 miles east of Mount. Airy, North Carolina, the real life town where Andy Griffith, the actor who played the guardian of Mayberry, grew up.

“A police officer that literally knew everybody in the community. Everybody knew him. And when he did his work, you wanted to see him win,” Tatem said.

A win for the warrior cop is what Arpaio hopes for next week. He’s asking Republican primary voters to give him a chance in November to get his old job back.