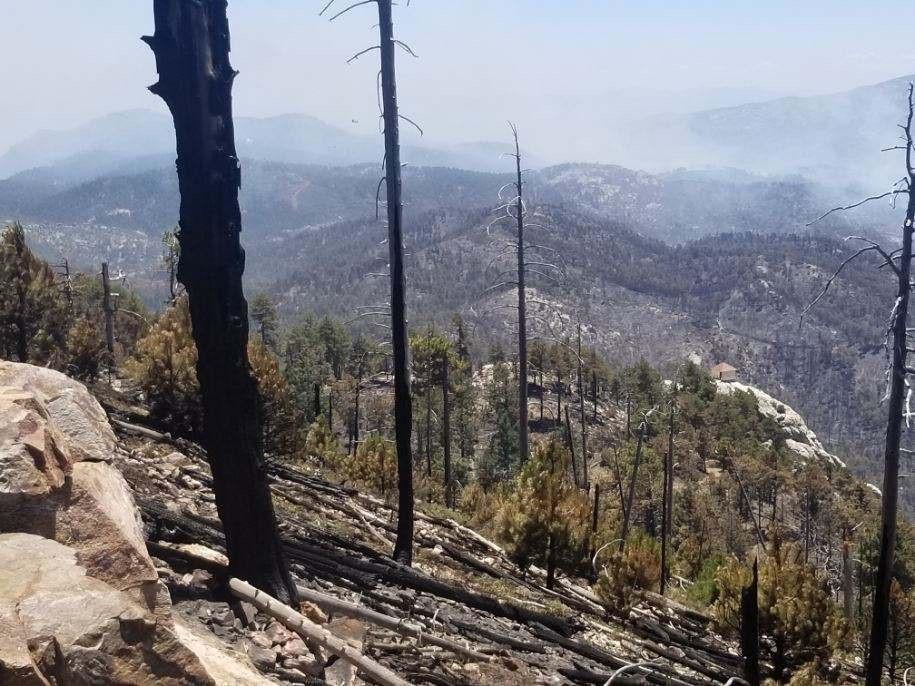 InciWeb
Scar from the Bighorn Fire along Meadow Trail on June 29, 2020.

LAUREN GILGER: After a lightning strike in early June, the Bighorn Fire burned nearly 120,000 acres outside of Tucson, and people were forced to evacuate their homes. But the danger from the fire isn't over yet. Earlier this month, authorities announced Mount Lemmon and Sabino Canyon outside of Tucson will be closed because of the danger — not of fire now, but of flooding. The Tonto National Forest is also closed after the Bush Fire burned more than 190,000 acres  there. It's a perennial challenge that comes each monsoon season as we welcome rains in our state. But in areas where the land has been scorched so severely, that water is less than welcome. I spoke with forest hydrologist Dick Fleishman more about it. He's the operations coordinator for the U.S. Department of Agriculture's (USDA) Four Forest Restoration Initiative.

DICK FLEISHMAN: The science behind it is that when fire burns through an ecosystem, especially if a very high intensity fire, it actually changes the way the soils work. Soils are generally like a sponge. So when water hits it, it absorbs. So what happens when we get extreme heating? It actually takes a lot of the organic matter and turns it into almost like a waxy type of material that actually plugs the soil. And that soil goes from being a sponge to a roof. So when water hits it, it runs off almost immediately, especially on steep slopes.

GILGER: So this is not necessarily the case with sort of naturally occurring fires, though, right? This is different when it, when it comes to these big catastrophic wildfires that we see more often today.

FLEISHMAN: Yeah, with, with the way fires used to burn on the ecosystem, especially in the forests of northern Arizona, they were very frequent — every three to 15 years. So the fire intensity was much lower because the amount of fuels we had was much lower. And then in the desert ecosystems, especially Sonoran Desert, we just generally didn't have much in the way of fuels there. What we have drive and fires in that, in that Sonoran Desert is actually non-native grasses. So, so that's, they definitely did not evolve with fire. So the soil conditions there can change very, very readily as well.

GILGER: So these are relatively newer phenomenon. What's the cause?

FLEISHMAN: For the forests in northern Arizona, it's been a fire exclusion, ironically, which actually increased our fuel loading. We've gone from, on the average about 25 to 125 trees per acre, and an acre's about a football field. So you can imagine that to us, on some acres, over a thousand trees break or so. Just the amount of fuel is much higher. So they burn much more intensely.

GILGER: Yeah. Yeah. So what are these floods like when you see a catastrophic wildfire happen and then the monsoon rains come, which tend to happen in succession? How deadly can they be?

FLEISHMAN: Well, actually, the Schultz Fire in 2010 actually did have one fatality associated with it. Person was swept away in the rain waters. They can come rather rapidly. They come with debris and that debris is rocks, logs, and, you know, so they're, they're, they're very destructive and happened very rapidly. It is basically a flash flood.

GILGER: So let's talk a little bit more about what's being done to try to prevent this kind of flooding after fire, especially up in Coconino County, it sounds like there are lots of efforts underway. What are those look like?

FLEISHMAN: So there's a couple steps there. So immediately after a fire, we actually do what we call a burned area emergency response team that comes in and actually starts looking at — and it's actually why the fire's still going on — they start taking a look at where we have potential impacts of life and property below a fire. And we'll try and put mulch on, on steep slopes because it usually the steep slopes that cause the problems. We do that with helicopters and up to about 40 to 50% slope we can drop hay. We actually look at that cleaning stream channels so they actually has a free flow and doesn't clog up with material and actually breach and cause a breached dam hydrology, which is much more destructive. As far as what the city of Flagstaff and Coconino County have also coordinated with us to do that work on, on private land as well.

GILGER: So is this sort of our new normal? Is this inevitable at this point or is there some sort of long-term solution? Does it come down to then just preventing these kinds of catastrophic wildfires?

FLEISHMAN: What we're, we're trying to do is prevention restoration work that in the, in the Ponderosa pine type is actually get that, those number of trees per acre back down to a normal level of our normal range of variations — like I said, 25  to 125 trees per acre. So Four Forest Restoration Initiative in northern Arizona is trying to actually do that through thinning of forests and then bringing fire back in to play its natural role of actually keeping the fuels to a lower level. So what we're trying to do is actually do that preventive measure. It's just like your health. If you're doing preventive measures, going to the doctor every year, getting your physical, chances of having that catastrophic event or decrease this very same analogy with our natural systems. So if we can actually do that prevention work much cheaper than to actually go in and, and actually have to suppress a fire. You know what we get in these large fires, they're well over a million dollars a day in suppression costs. We're doing preventive work. You know, we may be paying $2 to $500 per acre, but that's a whole lot cheaper than, than actually having to pay for that suppression cost. So very analogous to your own health.

GILGER: Yeah, definitely. All right. That is Dick Fleishman, the Four FRI coordinator with the USDA up in Flagstaff. Dick, thank you so much for joining us to talk about this.

FLEISHMAN: You're welcome. And we hope to see you guys up in northern Arizona. It's gorgeous up here this time of year.