Download mp3 (7.46 MB)
Coverage of aging is supported in part by AARP Arizona 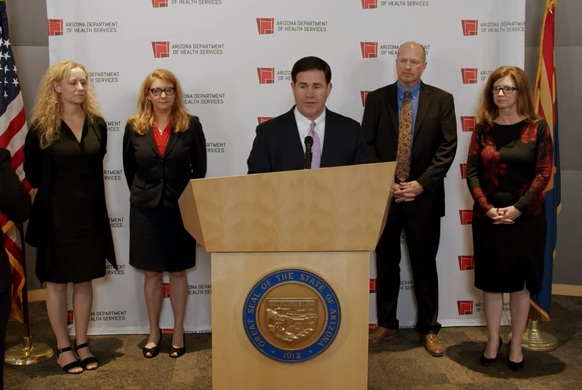 Last week, the trade group that represents many nursing homes and assisted living facilities across the country sent a letter to all U.S. governors sounding the alarm of impending outbreaks of COVID-19. One reason: testing.

The lack of regular testing and rapid results has plagued Arizona’s long-term care facilities — and without that, it’s practically impossible to stop the virus in its tracks.

The letter from the president of the American Health Care Association and National Center for Assisted Living said that community spread is a leading indicator of cases inside a nursing home or assisted living center.

Welcome to Arizona — where the coronavirus is widespread.

But how did we get to this point? Well, this story starts in the early days of the pandemic, our numbers were still low. But at a press conference on March 11, Gov. Doug Ducey told Arizonans he was not taking any chances.

"This is about public health and protecting lives, especially those of our elderly and most vulnerable," he said.

Standing behind him was Dana Marie Kennedy, the state director of AARP Arizona. She later thanked him and the head of the Arizona Department of Health Services, Dr. Cara Christ.

"And I am so honored that our governor and Dr. Christ has been taking the lead and taking swift action to make sure that we do not have that type of situation happen here in Arizona,"

The situation she was talking about were the deaths of at least two dozen nursing home residents from COVID-19 in Washington state.

A lot has changed since that day. Residents here are dying, many more are sick, and Kennedy is frustrated.

In part, because of testing. Adequate personal protective equipment and staffing are critical. But onsite testing and rapid results are the keys to reopening long-term care facilities.

In mid-May, Dr. Cara Christ announced the state would start testing residents and staff for the virus in the state’s 148-Medicare/Medicaid-certified skilled nursing facilities, which serve patients with more challenging medical conditions.

That included the Beatitudes Campus, a retirement community in Phoenix.

Michelle Just is the CEO there. She says testing through health department started on May 30. The state followed up two weeks later.

"And through that we had 11 staff members who tested positive. Five of them were asymptomatic, and continue to be," said Just.

But she says it took seven days to get the results back.

"Yeah, the other science is clear on this," explained Christopher Laxton is the executive director of the Society for Post-Acute and Long-Term Care Medicine. "The PCR test, the nasal pharyngeal swabs, do depend on rapid results in order to be usable. And by rapid, I mean 24 to 48 hours.

"Once it gets beyond that point, they really aren't that helpful because the virus moves quickly," he said.

Laxton says labs across the country are overwhelmed, including labs in Arizona

"And I think if you don't have good lab capacity in your area, you need to look at a different strategy for keeping your residents and stuff safe."

Which is what Just has been doing at the Beatitudes. She has been paying for additional testing for staff. Each test costs about $115.

"But that's not sustainable," she said. "It's not fair to families. It's not fair to the residents. And if we could have adequate testing, rapid results, we wouldn't have to have it locked down the way that both CMS and the governor's order has us [doing]."

"If this was a priority, there would be a plan," said Kennedy.

"If this was a priority, there would be a plan."
— Dana Marie Kennedy, AARP Arizona director

Kennedy recently testified before members of Congress calling for a national plan that would prioritize testing, personal protective equipment and transparency. In the meantime, she says the governor could issue an executive order mandating weekly testing of assisted living facilities.

Instead, it created another problem: isolation.

"You know, the emotional toll on this as well on the resident as well as the family is just unbearable at this point in time," she said. "And we have not done a great job making sure we're doing everything possible to be able to make sure that our loved ones are well cared for."

Four months have passed since Ducey vowed to protect Arizona’s most vulnerable residents and now there appears to be a plan for ongoing testing — at least for the skilled nursing facilities.

According to the U.S. Department of Health and Human Services, staff should be tested weekly, and the federal government says it will start shipping 400 rapid, on the spot testing kits to skilled nursing facilities across the country in the coming weeks.