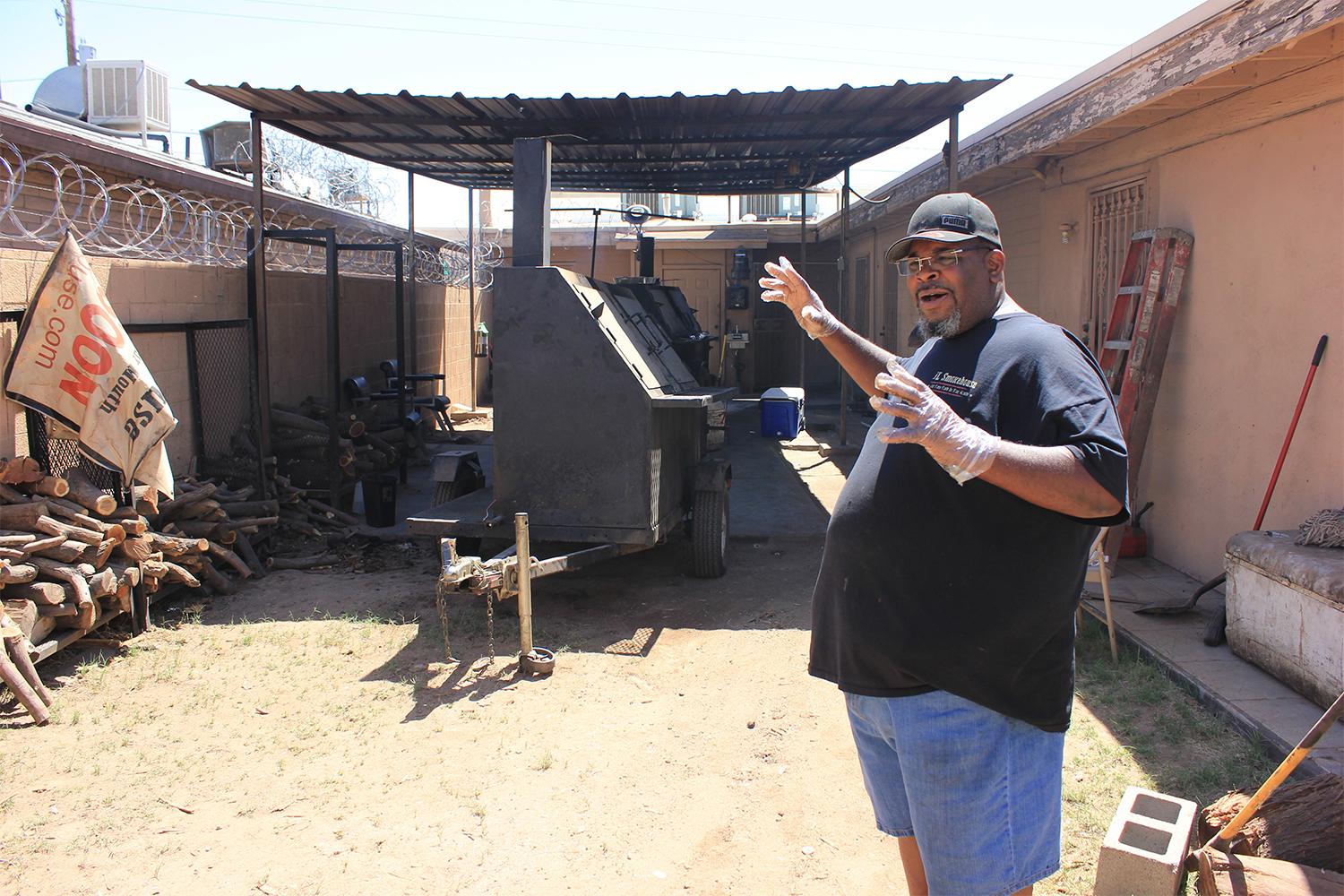 MARK BRODIE: In recent months, as we've seen protests over racial violence across the country and new support for the Black Lives Matter movement, we've also seen new support for Black-owned businesses. And our next guest argues a good place to put those dollars here in Phoenix is toward our burgeoning Black barbecue scene.

STEVE GOLDSTEIN: I don't know that people think about barbecue in Phoenix, Mark. Like St. Louis, I've had good barbecue. In Nashville.

BRODIE: Yeah, I know you don't exactly think barbecue and think Phoenix necessarily, but there's a good argument here. Chris Malloy is the food critic for the Phoenix New Times, and he took this one to the experts. He's joined here by James Lewis, the pit master at JL Smokehouse in south Phoenix. They spoke with our co-host, Lauren Gilger.

CHRIS MALLOY: So there's absolutely a very robust barbecue scene here. I mean, the past decade, we've seen some incredible growth and then specifically within Black barbecue. I mean, we kind of trace the modern scene back to 1984 when Honey Bears opened out of an apartment in Tempe. They moved to a brick-and-mortar two years later. And that's kind of the surviving old school Black barbecue joint. But then in the last three or four years, we've had just an amazing lineup of openings, including Word of Mouth Grill, Trapp Haus, West Alley, Rhema Soul — now operating out of a food truck — and JL Smokehouse, one of my absolute favorites. So the scene is strong, and it's just a pleasure to be writing about it and, and eating the food.

LAUREN GILGER: Yeah. OK. So that is a good entree into our other guest here. So let's turn to you, J.L., and, and give us a sense of how long you've been in the barbecue scene here, sort of how you made your way within it.

JAMES LEWIS: Well, I started JL Smokehouse on the side of the road there in north Scottsdale. And, you know, we was there for probably about 17 months on the side of the road, off and on, you know, in between doing lots of catering and stuff like that. And we started a restaurant — in 2017, we started a restaurant, and we've been going ever since. My passion for barbecue is that, No. 1, I'm just very patriotic. I love America, and I love the fact that people been cooking on wood and fire for years. But barbecue in America, the low and slow cooking, it started with the slaves and many things their master would give them that was considered scrap. They took that food, and they cooked it low and slow, and we have American barbecue today. And every day that I do it, it's very proud to know that, you know, American food is barbecue. And it was, you know, it started with men of my ancestry.

GILGER: J.L., what do you think is different about the way that you run the pit or just what's happening sort of in Phoenix's barbecue scene? What do you guys do that might be a little different than elsewhere?

LEWIS: For JL, I can only speak for what we are. My thing has always been to bring true barbecue to Arizona. When I came upon the scene, I felt that there was not enough true barbecue on the scene. My thing is what I believe: If it ain't no wood, the food is no good. And so you gotta cook it with wood, and cooking over wood is what is all about. And so that's what I think that makes JL's Smokehouse stands out. Everything we do is, we cook over wood, and there is no shortcuts.

GILGER: All right. Chris, what else is going on in the Phoenix barbecue scene beyond what JL is doing? He's a, he's I know one of your very favorites, but what else is there?

MALLOY: So when I was speaking with Adrian, he, you know, I had a nice conversation with him about Black barbecue and certain hallmarks that he looks for across the country. Certain kind of quirks that Black barbecue has that other kinds of barbecue might not have to the extent that Black market does. So rib tips, you see a lot of rib tips, you see some shaking, you see links, often hot links, and then some soul food sides and desserts. And, and there are a few other ones, but those are some of the main ones. And I think, like when we're looking at some of the different establishments that I really like, for example, over at West Alley, they do a great baby-back rib. The guy working the pit, Jim Dandy, has been a pit master for generations, and he came over from Tennessee to work the pits there. They used these old school pits that actually operate with this kind of creaking pulley system. And they put the meat down right by the wood, and the fire in the ground. It's pretty incredible, you can see it out back.

MALLOY: Some other places, like Word of Mouth Grill, which recently opened in south Tempe, they're doing some great links, also doing some great rib tips. I think at Trapp Haus, Phil the Grill is doing some interesting stuff. He kind of fuses this competition style with a little bit more of a traditional backyard style. So you see some kind of hybridized stuff there that you're not seeing in other places. He smokes with some, some fruit woods like cherry wood. Does some great ribs, like some of the other guys. And Rhema Soul does some interesting work. I mean, they're out of a food truck now. It's, it's tough to, to barbecue that way, but they're still putting out a great product. Yeah. I mean, that's just kind of the tip of the iceberg.

MALLOY: Well, I think in the wake of everything that's happened this spring, I mean, we've seen that America has kind of very belatedly recognized that huge swaths of our population have been marginalized and mistreated, you know, for hundreds of years. And I think it's time when, you know, when we start talking about the Phoenix barbecue scene and we have all of this black excellence, you know, it's time to start calling that out. I think it's a really important thing to do. And I think giving people like J.L. your dining dollars, supporting what he's doing, all the hard work he's putting in. You know, he acknowledges the history. He goes through all of the difficult steps. I mean, he considers every meat on a very deep level. And he has a style that channels the roots and that speaks to those, you know, ugly roots of barbecue. But important roots. And, you know, when you have a rib tip at JL's, it's, it's succulent. It's, you know, it kind of ripples with that smoke in the fire in a way that some of the more, I guess, contemporary Phoenix places that shoot for more competition style, they don't really exhibit that kind of smoke in that fire and that kind of like, essence of barbecue. A lot of the Black barbecuers in Phoenix, they go a little more aggressive with the smoke and the fire. And you can, you can really get that kind of backyard flavor. I think, J.L., you have a phrase for that, right?

GILGER: All right. That is James Lewis, J.L. of JL Smokehouse in south Phoenix and Chris Malloy, the food critic for the Phoenix New Times. Thank you both so much for coming on The Show.

MALLOY: Thanks so much, Lauren.