These Four Initiatives Should Have Enough Signatures For The Arizona Ballot 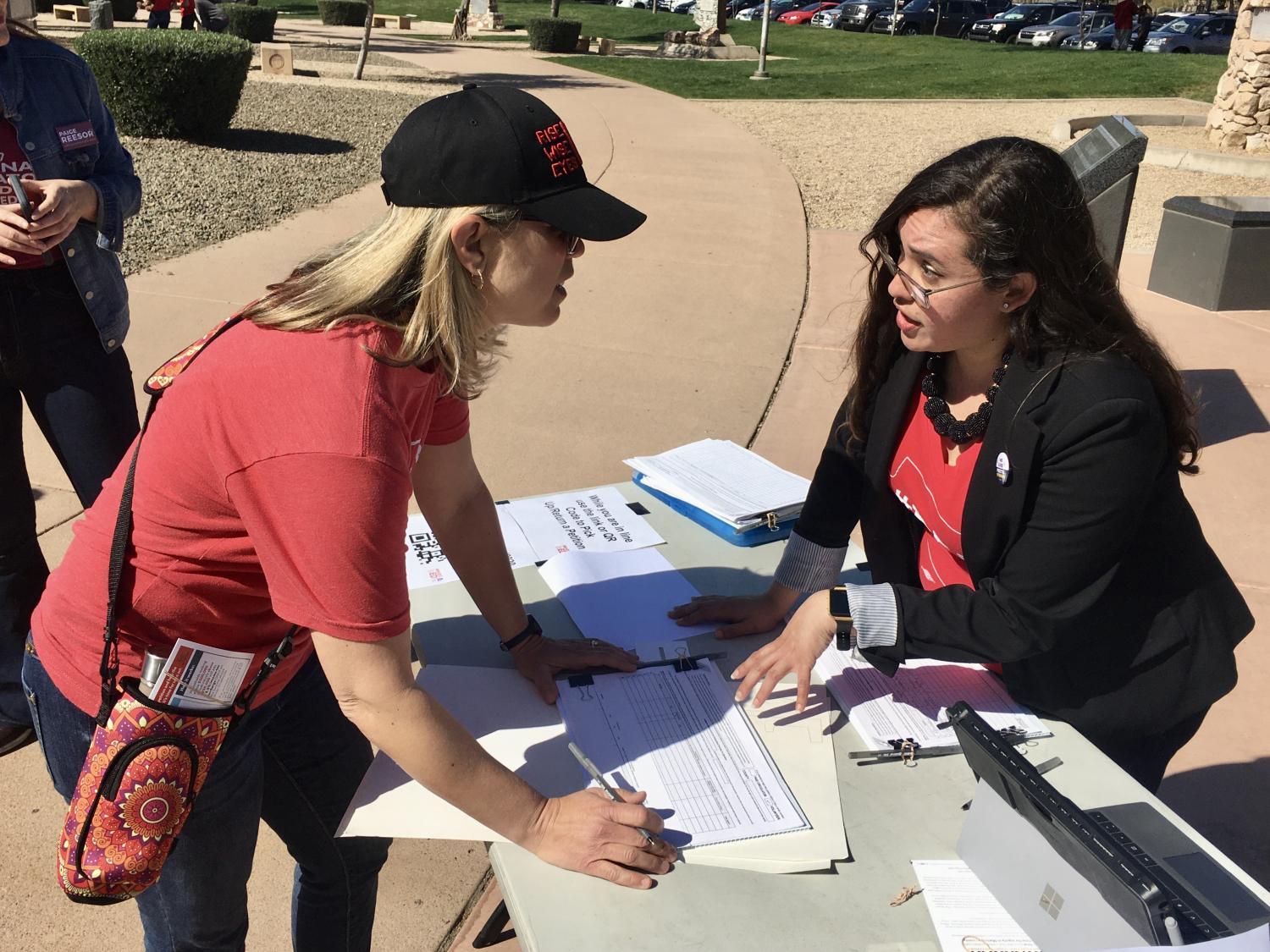 Christina Estes/KJZZ
Molly Pont-Brown, a teacher at Hopi Elementary in the Scottsdale Unified School District, gets information about gathering signatures for the "Invest in Ed" petition in February, 2020.

STEVE GOLDSTEIN: A handful of ballot initiatives have survived the pandemic and are poised to clear a major hurdle towards letting voters decide if their ideas should become law. Today is the deadline for the groups behind those proposals to turn in enough signatures to qualify for the ballot in November. And here to give us a sense of what they've been through and what's in store is our own Ben Giles. Ben, how are you?

BEN GILES: I'm good. How are you, Steve?

GOLDSTEIN: Doing well. So let's discuss these initiatives. There are so many signatures in order to get on the ballot. So, Ben, did the governor's stay-at-home order, which some people found confusing even to this day, did it prevent campaigns from actually going out and getting those signatures?

GILES: So one of the things the governor did before he actually issued the stay-at-home order, you might remember, is make a list of what are essential services in Arizona. Now, that was primarily things like getting groceries, getting medical supplies, going to take care of someone. But one of the things the governor also protected — which he did get praise from the campaigns for this — is he did protect political endeavors, basically. And in this case, the right to direct democracy in Arizona's constitution is something that the governor spelled out as an activity that would still be allowed even while the stay-at-home order was in effect. By the letter of the law, no, it didn't stop campaigning. But again, telling everybody to stay at home really did cut off those natural places, those natural gatherings that are usually a hotspot for signature gathering. Credit where credit is due, the campaigns were glad that the governor did acknowledge that this is still a process that needs to continue, pandemic or not.

GOLDSTEIN: And Ben, big picture. Before the pandemic came, there were thoughts at least that this could be another busy ballot year for Arizona as it relates to initiatives. But after all the struggles, what are the survivors potentially here?

GILES: So we're looking at four survivors that I'm aware of right now. We did have one campaign file their signatures first of July — yesterday. That was the Smart and Safe Arizona campaign. That's the latest effort to legalize recreational marijuana in Arizona. Of course, it's already legal for medicinal purposes. They filed, funny enough, about 420,000 signatures.

GILES: Oh, the irony. But that's a good number, and not just for the irony. It's good because it's well above the 237,000 or so valid signatures that you need to qualify for the ballot. It's always important to have a strong buffer there of signatures that are valid. There are three more campaigns that are expected to file today: A surprise billing campaign that has to do with bills you might get at a visit to the hospital. There's an invest in education initiative that would actually add a surcharge to the state sales taxes to try and raise hundreds of millions of dollars for education. And there's a campaign known as Second Chances, which is broadly some criminal justice reforms aimed at reducing recidivism in Arizona.

GOLDSTEIN: Ben, even when it comes to collecting the signatures, there is still a process to make sure those signatures are valid. What's the next real challenge, and how difficult could the challenge be to get these initiatives actually on the ballot?

GILES: There's two big steps that these will go through. One is a just a natural part of the process, and that is a signature verification process. There's a sample of signatures that are taken, for example, from Smart and Safe Arizona initiative, they'll be a sample of those 420,000 signatures that they gathered. And those will be verified. And long story short, they'll use the sample to kind of extrapolate and figure out of those tens and hundreds of thousands of signatures, how many are actually valid and how many will count towards that 237,000 signature benchmark that they need to clear. But the other hurdle is in the courts. There is often challenges to the validity of the signatures from folks who oppose the ideas that the initiatives are trying to pursue. They will go to court, and they will sue, and they will challenge specific signatures in some cases. But broadly, the tactic has been to subpoena the people who are gathering the signatures and try to force them to come into court and prove that, "Yeah, I gathered that signature and yeah, I think it's valid, and here's why."

GOLDSTEIN: So Ben, finally, if there's legal challenges are not effective and these initiatives do make it to the ballot, we can expect pretty heavy opposition. Where is the opposition going to come from?

GILES: Well, it might come from as high as the Governor's Office. We have seen Ducey weigh in on things like, for example, sales tax hikes, like the Invest in Ed initiative is pushing. We'll probably also see a very active Arizona Chamber of Commerce. They came out against three of the initiatives already: The hospital initiative, the marijuana legalization initiative, and they've even formed a campaign committee to fight specifically the invest in education initiative. They don't want to see a higher sales tax voted into law by Arizona voters in November.