Direct Democracy Struggles, But Survives In Arizona During The Pandemic 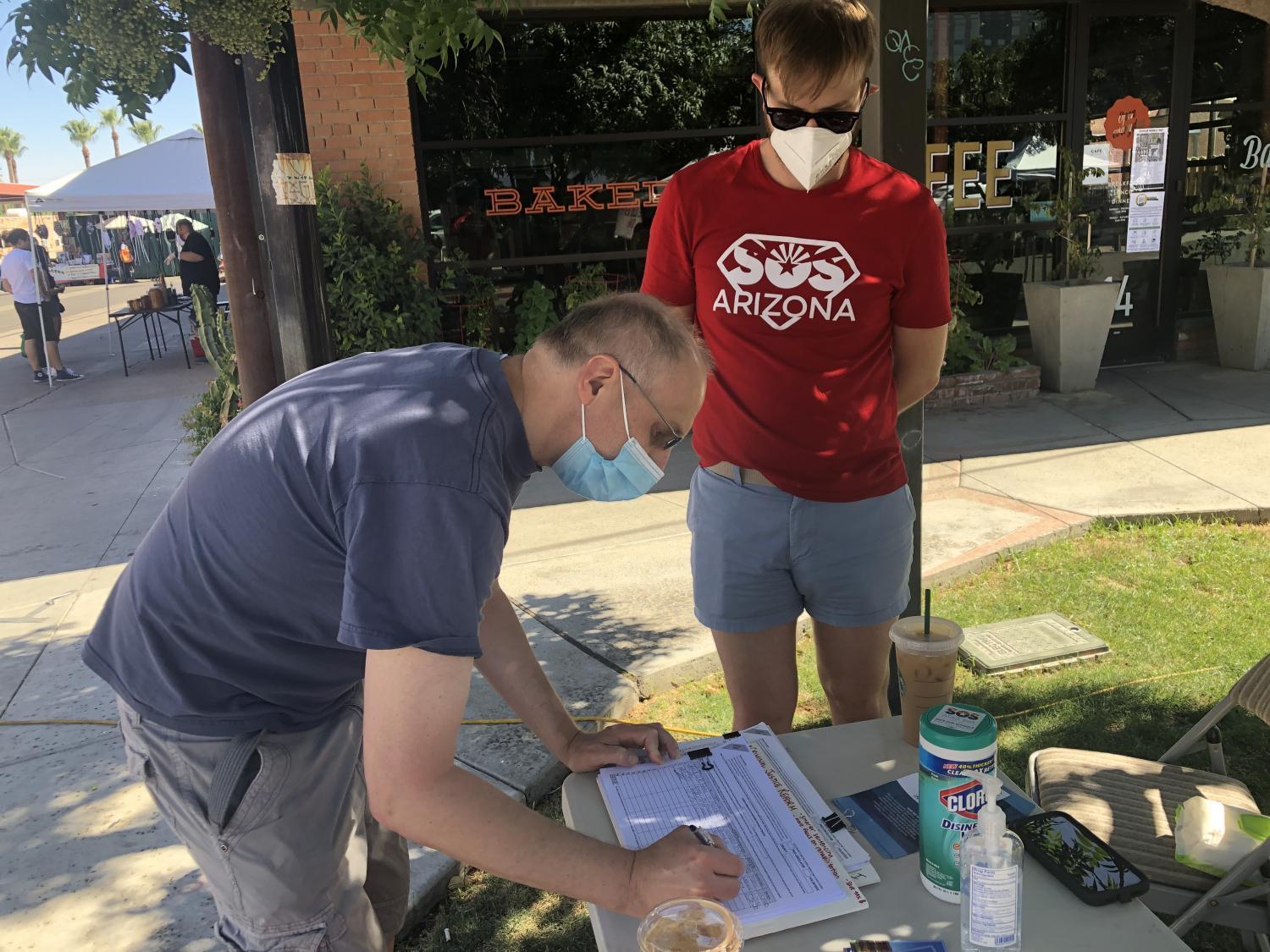 Scott Bourque/KJZZ
A voter signs a petition for a criminal justice reform initiative during a signature gathering event at the downtown Phoenix farmer's market, June 20, 2020.

Gov. Doug Ducey's stay-at-home order at the end of March was a knife to the heart of many initiatives in Arizona. Though the governor protected campaigning as an essential activity, gone were the days of gathering signatures at public libraries or farmer's markets.

But the realities of the pandemic had already manifested on the campaign trail well before that.

"When you go back and look at our signature totals and our daily reporting, you can see that it actually started around the second or third of March, where the apprehension of signing petition signatures and, you know, campaigning in and around people had changed dramatically," said Andrew Chavez, the owner of the signature gathering firm Petition Partners. "People started to understand that distancing was important."

Chavez said his staff went from collecting 67 signatures an hour to less than one.

On March 25, Chavez pulled all his staff from the field. He spent the next nine days trying to determine if his business could survive amid the pandemic.

"We honestly did not know," he said. "Take yourself back to that time and the amount of confusion that was going on about COVID and understanding transferability rates, where the virus was on paper or cardboard or plastic. That was all really big questions that we had, we just didn't know we're going to be able to do it safely.

Chavez has found ways to manage, as have a handful of initiatives still in the field.

There's the Stop Surprise Billing and Protect Patients, which seeks to reform the way patients are billed for pre-existing conditions. The Smart and Safe Arizona Act hopes to legalize recreational marijuana, four years after voters rejected a similar measure.

Smart and Safe has more than enough signatures to qualify, according to campaign spokeswoman Stacy Pearson. They’ve been in the field gathering signatures since late 2019. 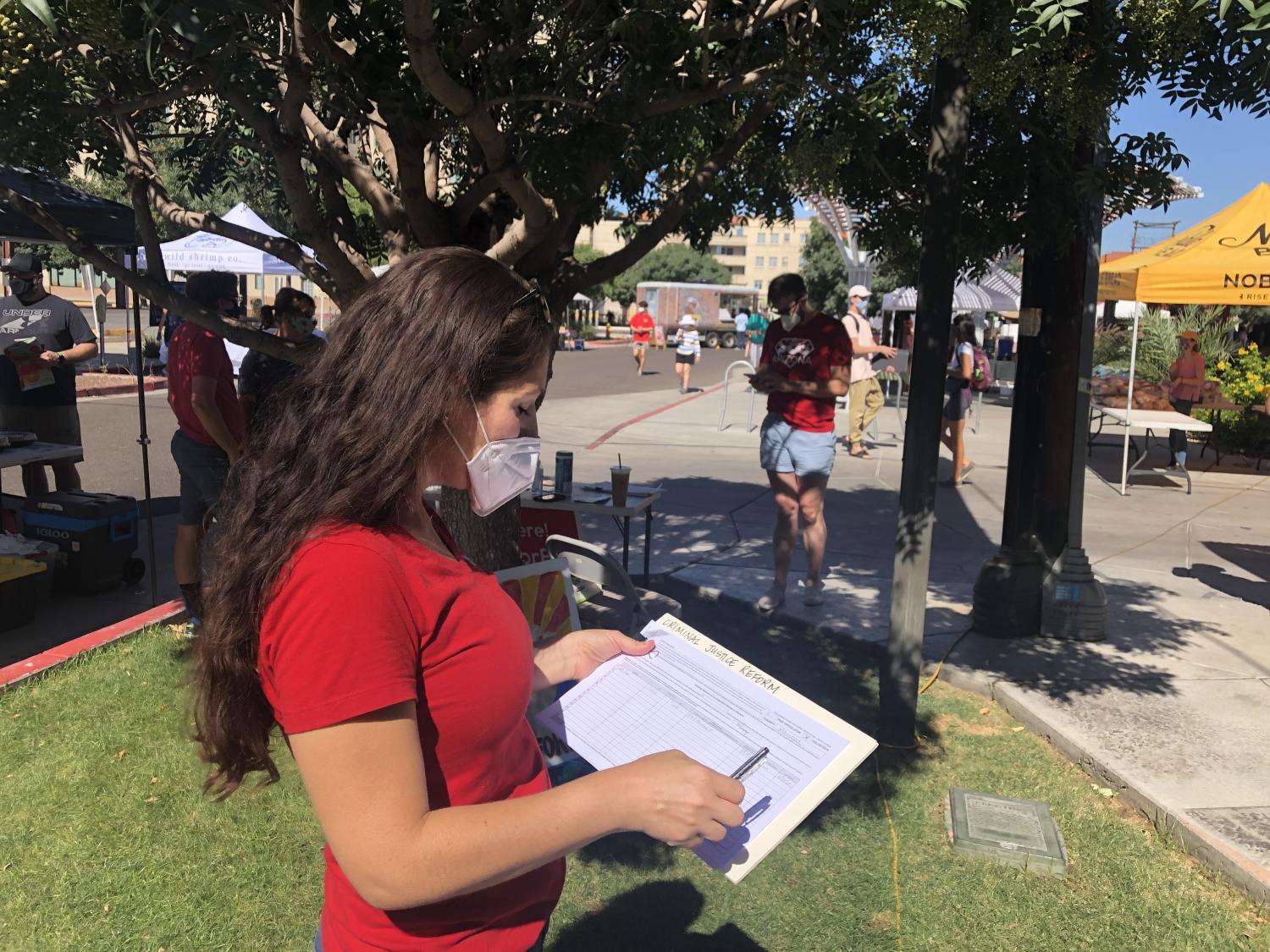 Scott Bourque/KJZZ
Dawn Penich-Thacker collects signatures for a ballot initiative ahead of the 2020 election at the downtown Phoenix farmer's market, June 20, 2020.

Pearson represents two other initiatives that got a late start: The Invest In Education Act would raise taxes to better fund schools; the Second Chances, Rehabilitation and Public Safety Act aims to reduce recidivism, among other criminal justice reforms.

"Both of those campaigns got in the field around Presidents Day, and only had a couple of weeks before the pandemic hit," Pearson said.

Petition Partners works for both campaigns, and had to adjust their strategy.

Chavez said they focus on door-to-door campaigning, a tactic that typically makes up less than 25 percent of their signature gathering efforts. Those efforts have been more successful as of late. Chavez said they give advance notice to neighborhoods before stopping by for signatures, and there seems to be a real desire for dialogue.

But it’s not as efficient as gathering signatures at crowded public places, so Chavez hired hundreds of new employees.

It'd usually take 150 to 200 signature gatherers to staff a successful campaign. Chavez said he has 600 people in the field right now. Due to staggering levels of unemployment, there were ample applicants.

"We had pilots, flight attendants, bartenders, servers, teachers, who were in need for a job. And luckily, we hired all the way through," he said.

Pearson said the resilience of volunteers has also been remarkable. People who gathered only a handful of signatures in February held on to their petition sheets.

"It's unlike anything I've ever seen for, for any campaign that I've worked on."
— Stacy Pearson, Smart and Safe Arizona Act spokeswoman

"It's unlike anything I've ever seen for, for any campaign that I've worked on. Yeah, it has ramped up; it is a straight ascension into the sky," she said.

Volunteers from other ballot initiatives that pulled the plug on their campaigns have helped boost the signature gathering efforts for Invest in Education and Second Chances.

Dawn Penich-Thacker of Save Our Schools Arizona was working on her own organizations effort to restrict Arizona from expanding school voucher programs. At Saturday’s farmer’s market in downtown Phoenix, she was trying to get signatures on petitions for education funding and criminal justice reform.

"A lot of people like zoom right over when they hear those words," she said. "And then other people are kind of like ‘I’m just shopping,’ you know?"

Aside from door-to-door canvassing, large events are how organizers gather signatures for candidates and ballot initiatives.

But in mid-March, when the gravity of the coronavirus pandemic became apparent, events stopped.

The deadline to get signatures remained unchanged, and the state law doesn't allow online signature gathering for ballot initiatives. Canvassers were forced to get creative if they wanted to stay on track.

"We have a lot of volunteers who put petitions on their driveway, and they watched through a window. And they just tell their neighbors, 'If you feel comfortable, I’ll be 12 feet away, come through and sign,'" Penich-Thacker said.

They really only got about a dozen signatures a day doing that. It wasn’t until mid-May, when the governor’s stay at home order expired and some events resumed, that they were able to continue.

"A lot of people were like ‘Yes! We’re going out again! I’ll put on my mask and I’ll be there," she said. 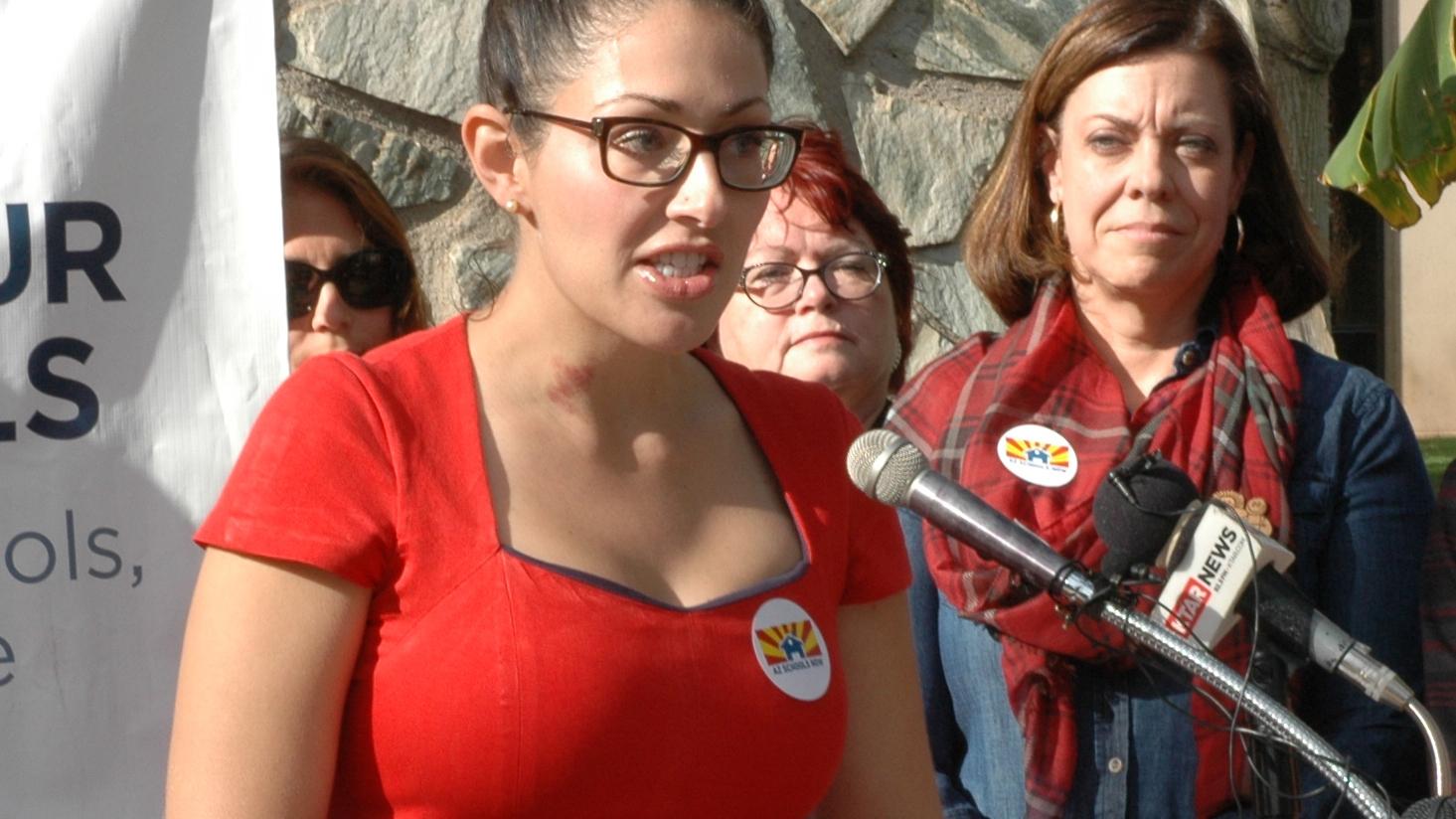 But it’s different. Instead of going out and mingling with the crowd, they stay at a table or booth. They’re wearing masks. They sterilize pens in between each signature and offer hand sanitizer to everybody who signs.

If anything, though, current events seem to have bolstered enthusiasm among voters.

"This is the moment," Penich-Thacker said. "Our public schools are already underfunded, and now what we’re going to have to do to keep students and teachers safe is going to require a lot of money. And with Black Lives Matter and the police violence issues we’ve been facing have put criminal justice reform more in the spotlight.  No one could have planned that. But it makes these two issues in particular really front of mind for a lot of voters. When they see us out, a lot of them say ‘I’ve been looking for you, thank you for being here.’”

Signatures are due on July 2.

Both the education and criminal justice reform initiatives have cleared the roughly 237,000 signature threshold to qualify for the ballot.

But there's still one more weekend to collect, and Penich-Thacker said more signatures are always better.