How 2 Notes In 'Jaws' Can Create Such An Emotional Effect 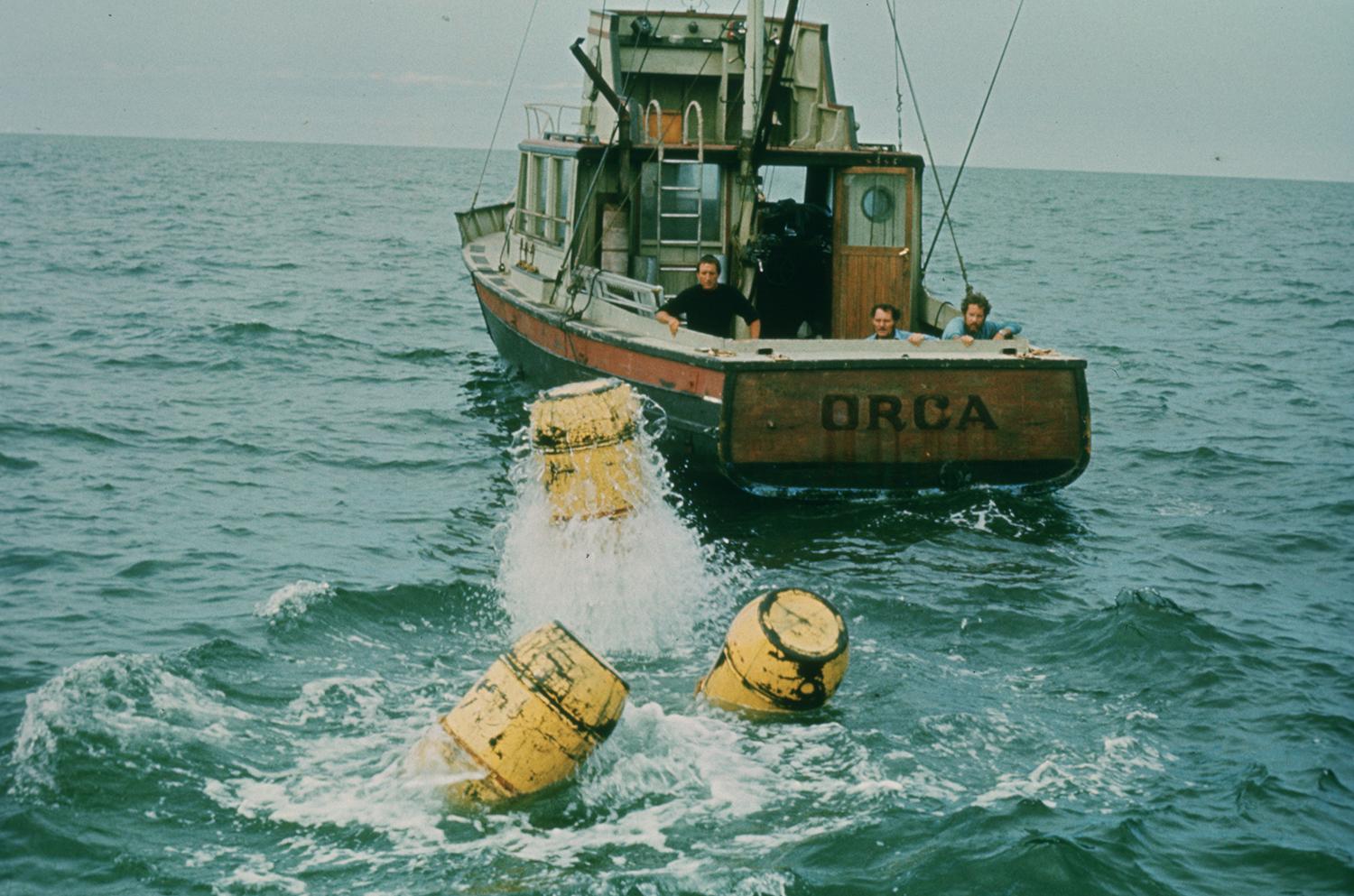 Universal Pictures
A still from the 1975 movie "Jaws."

LAUREN GILGER: The Hollywood classic "Jaws" turns 45 this year, and that means so does its iconic score. You know, Steve, those two notes that we heard earlier that make your skin just crawl a little bit.

STEVE GOLDSTEIN: Yeah. Lauren, there are certain people when they walk around the corner — and I think you know who I'm talking about — you kind of go, oh, OK, I'm I'm on edge now. OK.

GILGER: Alright. So it's amazing how just those two notes have become so iconic and can trigger this in it. So this all got us wondering, why does music have such an emotional effect on us? For that, I got a hold of Don Traut, a professor of theory at the University of Arizona's Fred Fox School of Music.

DON TRAUT: There are several things about the opening of Jaws that trigger things in our brains, that sort of connect to our fight or flight instinct, that kind of lizard brain thing that you hear about from time to time. The first of these is that it's low and it's soft and it's mysterious. And there's not a lot of notes at the beginning, right? It's not even really a melody at first. It's just one note and then it stops. And then there's two notes, and then it stops again. And so these long pauses with no pulse attached to them that we can latch onto at first really create this sense of mystery and the unknown. And our brain really prefers patterns to lock into something that it can build expectations from. Eventually, it does lock in and you have this pulsating, it's seemingly speeding up of that kind of back and forth between those two notes. So we do finally get this pulse, but it's speeding up and then eventually we start to get these dissonant, harsh and aggressive brass sounds that are given to us at unpredictable intervals. So it's another case where it's not a predictable pattern that is helping us know what to expect, it's still giving us these irregularly spaced, short and stabbing kind of dissonant, harsh brass sounds. And it eventually builds and builds and gets our pulse racing.

GILGER: Okay, so another film score we want to talk about is the really famous one for the shower scene in Psycho, right?

GILGER: This is not dissimilar from what we hear in Jaws for some of these same reasons, it sounds like.

TRAUT: Yeah, I think that's right. The shower scene in Psycho is composed by Bernard Herrmann. And it's a little bit different because, in Jaws we have something that's low and soft and then builds up. And in the shower scene from Psycho, we get these really harsh and unpleasant kind of, almost screeching sound in the violins. They're really harsh sounding, and that kind of harsh sound also triggers an alertness in our psyche. 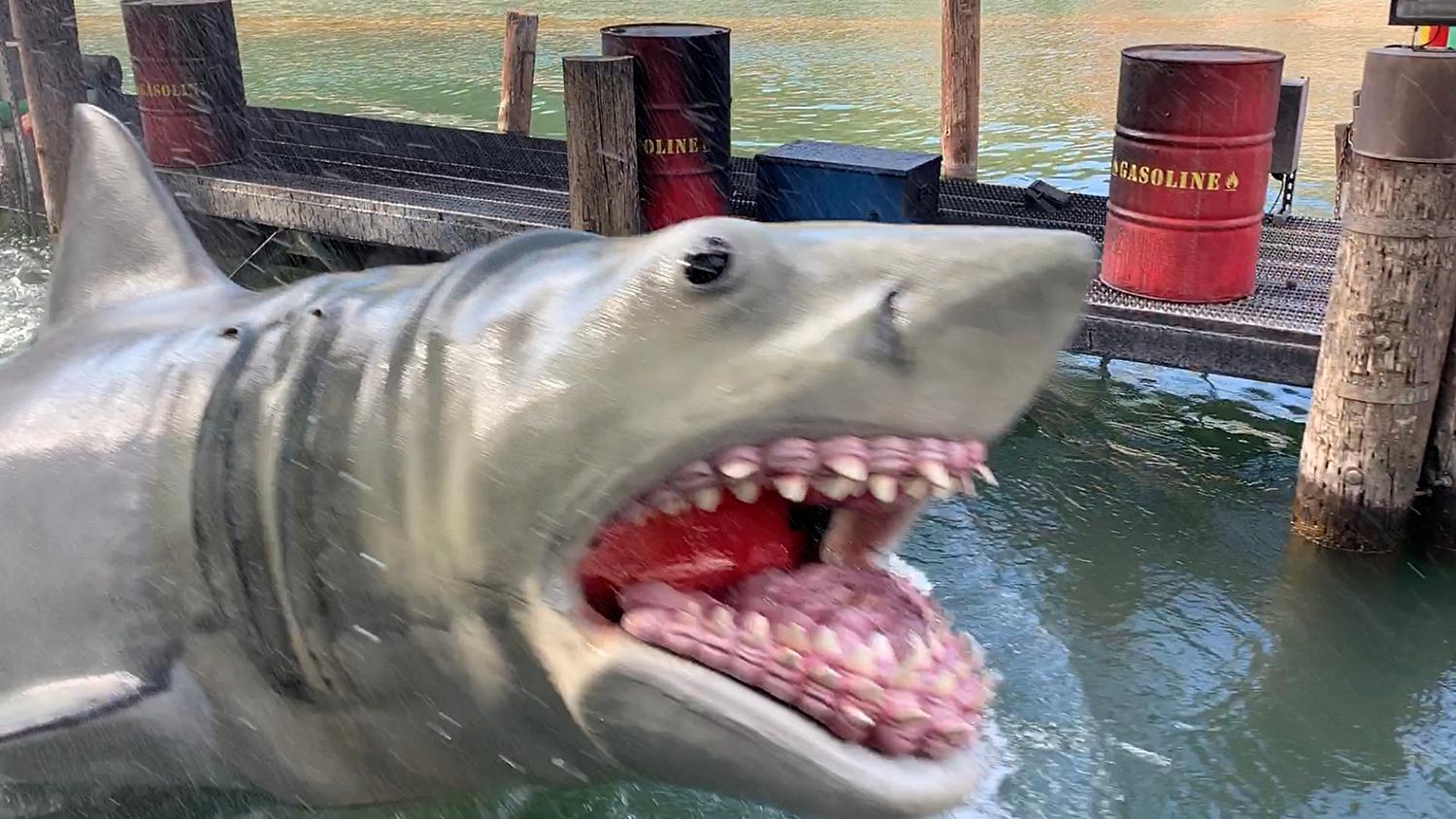 Tim Agne/KJZZ
The shark from "Jaws" pops out of the water during the Studio Tour attraction at Universal Studios Hollywood.

GILGER: Okay. So let's spend the last few minutes of this interview talking about the other end of the scale, the less scary and sad side of it.

GILGER: Yeah. Give us a few examples of composers – you're an expert in classical music, I know – like that do this the other way around, that bring us music that really makes us happy in a way that we can't quite explain.

TRAUT: Mmhm. The one that comes to mind most readily for most people when we think of happy classical music is probably Mozart. We have the image of Mozart as a child, both playing and composing music, and really throughout his life, he was able to capture that sort of playful and happy type of music with the great melodies that he wrote. There's a piano sonata in C Major that is is quite famous. And it simply starts off by arpeggiating that major triad. And then playing the scale, but also there's just a sort of simple and steady rhythm that goes along with it. And it's, you know, it's predictable and it's familiar, but it's, you know, it's just very good. More recent examples would be Randy Newman. I like Randy Newman a lot. He's been a songwriter for a long time. But more recently, he's written the music for all the Toy Story movies.

GILGER: Yeah, I know that as well. Yeah.

TRAUT: Yeah. So if you think of the song, "You've Got A Friend In Me," that's definitely in a major key and is, you know, just a happy tune.

GILGER: And pop music does this for us a lot, right. Like it, it's popular because it gives us all these things.

TRAUT: Exactly right, yeah. I might be showing my age, but there's a song called "Walking on Sunshine" by Katrina and the Waves from back in the 80s that, it's just a really happy, you know, three chords and they're all just major chords and a nice poppy beat to it. All of those things help us feel happy. So.

GILGER: Yeah. Alright. That is Don Traut, an associate professor of music theory at the University of Arizona's Fred Fox School of Music. Don, thank you so much for joining us to talk about this.

TRAUT: Thank you so much, Lauren. It's been a pleasure.

GOLDSTEIN: Oh, my God. I hate to use a lame one based on the title, but the James Brown song, "I Feel Good" always gets me going.

GILGER: Oh, that's a great example. I love that. Alright. We want to hear yours since it's Friday and we all need a little something happy to think about. Give us a shout out on Twitter. Steve there is @offcentervoice. I am @laurengilger and our co-host Mark Brodie is at @markwbrodie.