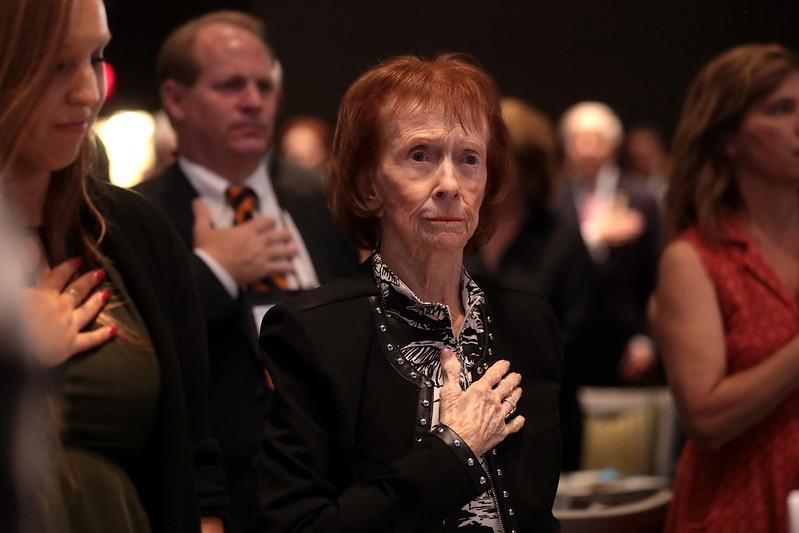 Gage Skidmore/CC BY 2.0
Former Gov. of Arizona Jane Dee Hull at the 2019 AZBio Awards Ceremony at the Phoenix Convention Center in Phoenix. Hull died April 17, 2020, along with her husband, Terry Hull. Jane Hull was 84.

Jane Hull, the first woman elected governor of Arizona, died last week at the age of 84. She passed away within hours of her husband Terry from natural causes. Hull was 84.

Arizona is deeply saddened by the passing of former Gov. Jane Hull and her husband Dr. Terry Hull.

The Kansas native came to Arizona in 1962 when her husband, an obstetrician, took a job on the Navajo reservation. They later moved to Phoenix, where Hull taught elementary school.

Jane Hull was Arizona’s secretary of state when she was elevated to the Governor’s Office following Fife Symington’s resignation in 1997. She was later elected to her own term and left office in 2003.

Hull was Arizona’s second female governor after Rose Mofford, and she was the first to be be elected to the job. Former Gov. Jan Brewer said Hull and her husband Terry died of natural causes within hours of each other.

“Jane worked tirelessly for our State, especially for AZ’s school children,” Brewer wrote on Twitter. “As my friend since 1981, I know AZ is better today because of her service. RIP.”

Brewer remembers when Hull made history a year later, in 1998, by becoming the first female elected governor.

"All the women were very, very excited, you know, that she became governor, because most of us all had been friends with her or served with her in the Legislature one way or the other. And to see her arrive at that wonderful position was, was a big thrill for all of us. It was a thrill for the state of Arizona," Brewer said.

Hull served in the Legislature, including as the Arizona House’s first female speaker before being elected secretary of state in 1994.

Rusty Bowers, the current speaker of the Arizona House of Representatives, worked under Hull when she was speaker.

“She was a very fair, straight up, no nonsense ... we didn’t have a lot of political intrigue with Jane. Just straight up. That was Jane,” Bowers said.

→ Did You Know: Arizona Leads The Pack With Female Governors

Hull’s Jan. 4, 1999, inauguration as governor with four other women elected to statewide offices, collectively dubbed “The Fab Five,” gave the state an all-female line of succession.

Regarded as a conservative while serving as a legislator, Hull’s tenure as governor included moderate policy initiatives. She said while governor she was responding to broader responsibilities of a statewide office.

“I tried to steer the Titanic a little bit more toward the education of our kids, and I really put the focus on children. Unfortunately a focus costs money and that’s what we did,” Hull told the Associated Press in a December 2002 interview shortly before leaving office.

In her first year in office, Hull won legislative approval of a new school facilities funding program to resolve a decades-long political and legal fight over disparities among districts. She also won approval for subsidized health care for children from low-income families.

Those and other Hull policy initiatives put her at odds with some Republican conservatives, and the former legislative leader was not reticent about using her powers as governor to prod lawmakers. Those tactics included calling the state’s part-time Legislature into special session without first securing support for controversial proposals and vetoing unrelated bills to pressure lawmakers into taking action on her priorities.

Grant Woods served as the state’s Attorney General in the early days of Hull’s administration. Woods says Hull stood out for her dedication to education.

"She fought hard for children's issues, for the public education system, in particular K-12, children’s health," Woods said. "I think her legacy is a very strong one of strong, confident, honest leadership.”

In 2000, she got lawmakers to put a sales-tax increase for classroom education on the November ballot, and voters approved it. That issue, like others, saw her triumph opposition from some GOP lawmakers.

In an interview with KJZZ in 2010, Hull criticized the partisan ideology that permeated the legislature after she left office.

“If you have people who are leaders within their committee, either party, if you have people that know their subject, they are much easier to deal with than those who are ideologically bound to vote no or vote yes," Hull said.

Jaime Molera served as Gov. Hull’s education advisor; she later appointed him as Superintendent of Public Instruction. He joined The Show to talk about her legacy.