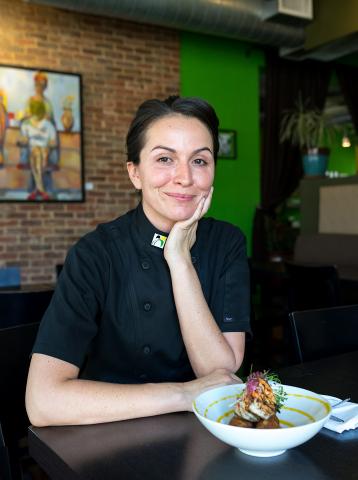 The Phoenix City Council hesitated Wednesday to put its stamp of approval on Mayor Kate Gallego’s declaration of a state of emergency.

On Tuesday, Gallego declared the emergency and ordered all bars to close and restaurants to stop dine-in service by 8 p.m. on Tuesday night.

To hear more about the impact restaurant closure decisions have on the people who are directly affected by them, The Show turned to chef Danielle Leoni. She owns the Breadfruit and Rum Bar with her husband, Dwayne Allen, in downtown Phoenix.

Just a few weeks ago, her career hit a high point when she was nominated for a James Beard Award for her work in the Jamaican-inspired restaurant. But now, things are at an all-time low.

DANIELLE LEONI: Yesterday, when we heard the news from the mayor, we knew that it was coming. And in the meantime, at the Breadfruit, we were just taking precautions. We took out tables. So there was six feet between all of our guests. We limited it to 10 people per room. We put sanitizer up front. All of our waitstaff started wearing gloves, so single-use compostable gloves. We sanitized every pen. We took every precaution possible so we can just keep everybody employed. And then, when she announced that restaurants could only go down to take (out) and delivery, I knew it was coming. But honestly, it was surreal. Like, you know, in your head, just you just feel kind of foggy and your heart sinks. And we thought we were ready, but it was a much bigger, much bigger predicament to face when the time came than we ever assumed.

LAUREN GILGER: So obviously, staff is probably the first thing that comes to mind here. Did you have to immediately sort of let everyone go, or are you trying to keep a skeleton staff? Are you trying to hope people will be around whenever you do get the chance to reopen?

LEONI: So we have such a loyal team at the Breadfruit. And yesterday, when that mandate was issued, Dwayne and I, we knew that there was no way that we could afford the payroll liability. And immediately, everybody was laid off. We had people that were with us for 10 years. For the hospitality industry, that's a tremendous amount of time. That tenure you don't see. And to have to call each one of them and explain that the next thing they do when they get off the phone with me, before they even think about what's next, you file for unemployment because I cannot afford to pay you. Luckily, we have the money in the bank to pay them what they earn for the week before. But we couldn't take the risk of having them come in and not knowing how much business we are going to do. So, for instance, we open last night — opened on Tuesday — and we only served six people. I certainly can't employ all 16 people if we only have six guests.

GILGER: So those are difficult decisions to make, difficult conversations to have. Are you hoping that at some point you'll be able to reopen and those folks will still be there?

LEONI: You know, yeah, of course it's a hope. But is it realistic? I don't really think so. I know we are —we're shut down for 14 days right now. I mean, we're we're a cash flow business. We can't afford, we cannot afford to stay in the business even if we're shut down for two weeks. So to say if there's hope to reemploy people? At this rate, without any assistance from our federal government, we don't know how we're going to pay rent, utilities, sales tax. You think of the tax, the payments. We don't have the money for that. And if we're shuttered, I certainly don't have that money to reopen. So where are we left? I mean, we already struggle as small independent operators. Now, we're beyond this point of hope. It's almost unrealistic to say there is hope. We need help. We need actual assistance. We need mandates. We need the federal government to come in and say, "We see you as a small business owner, and we know you can't afford to renew your liquor license or pay your sales tax." We need people to say that the government ... say that we understand that we have shut you down, and it is beyond beyond your hope or your desire to open. We need actual assistance.

GILGER: Danielle, this comes at a really interesting time for you because you just were nominated for a James Beard Award. This is like a high moment in your career. What was your reaction personally?

LEONI: You know, I have been working towards this goal of getting a James Beard nomination for at least the past five years of my life. And to be acknowledged by them is tremendous. And that and, all the sudden, everything that I have worked for — for not just the five years, but for the past 13 years at this restaurant — just got ripped away, taken away. And nothing matters anymore. Accolades don't matter. It doesn't matter. None of it matters. The only thing that matters is that we have healthy, happy lives. The only thing that matters to me is that the 16 people that I laid off can afford to feed their families. And I have always taken that for granted because we have been a success story at the Breadfruit. We're unstoppable at the Breadfruit. Well, we were. We were unstoppable, and we fell so hard yesterday.

GILGER: Can you understand the rationale behind this in terms of cities doing this around the country, around the world, asking for businesses to survive this hit so that we can protect people's lives?

LEONI: Yes. Unequivocally, yes. It absolutely makes sense. I am totally for it. Restaurants, bars. We need to shut down. We cannot continue to gather and spread this. However, even though I agree with that, we need to make sure that we have the plan that goes with it. Fine. Shut me down. Put me out of business, make me lay off everybody that's been devoted to me for years and years. But tell me how I'm going to survive, too. You can't just rip the rug out from underneath me and then just say "Have a safe fall." And the city's not saying anything. The state's not saying anything. And the federal government's not saying anything about it. So I hear a justice swallow those losses, and I don't have that kind of money or profit margin to do that. So, yeah, close me down, please. I want this to end as soon as possible. Stop takeouts, stop delivery. But please, you have to have a plan for us. You can't just leave us here.

GILGER: Restaurants run on kind of a thin margin to begin with. What do you think the restaurant industry will look like in Phoenix, you know, when and if they can reopen?

LEONI: When when this is over, and we're allowed to open our doors, we are going to be left with a disaster still on our hands. We don't get to walk into an office building and turn on a computer. We then now have to figure out, where are we going to get all this money to buy all this food again? Right? I didn't generate the revenue. I have thousands and thousands and thousands of dollars of loss in food. I don't have that money. So, you let me open my doors tomorrow. I don't have any food to sell you. I don't have any money in my bank account to pay that staff that shows up. And I've got to hope that enough people still feel safe enough to show up even though there's no mandate. I need the federal government to come in and make sure that people still have incomes. It's not about people being sick and supported. It's about everybody being laid off. Even if we are not personally unwell or caring for somebody, I have 100% loss, and I have no way of restarting my business. That's just me. And I'm one of hundreds of thousands.

GILGER: All right. That is Chef Danielle Leoni, the co-owner and chef at the Breadfruit and Run Bar in downtown Phoenix. Danielle, thank you so much for joining us.