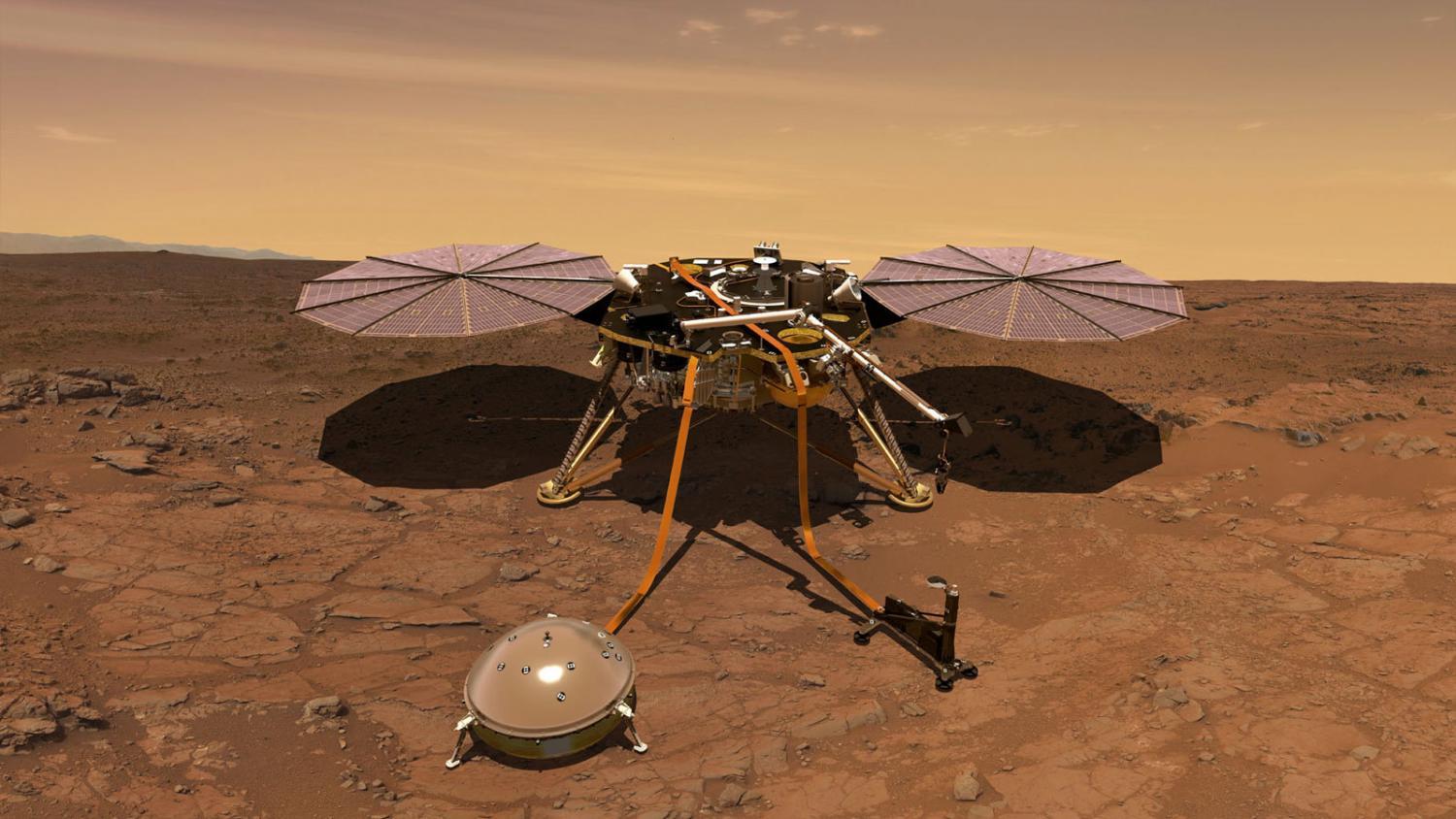 NASA/JPL-Caltech.
An artist's rendition of the InSight lander operating on the surface of Mars. The small dome is the mission's seismometer.

Researchers have published the first 10 months of analysis from NASA's InSight lander, which probes Mars interior structure. The findings reveal a world of quakes, volcanism and magnetic echoes.

The research appears in the journals Nature Geoscience and Nature Communications.

For the first time, scientists have confirmed Mars has seismic activity, driven not by tectonic plates but by long-term cooling, contracting and surface fracturing.

The Viking 2 lander made attempts to measure marsquakes 38 year ago but was unsuccessful.

The red planet's seismic activity is stronger the moon's, which NASA measured during the Apollo program, but weaker than Earth's.

Mission scientists have detected 450 quakes so far, 24 of magnitude 3 or 4. But the quakes happen so far down — perhaps 30 miles or so — they would pose little or no hazard to someone on the surface. However, more powerful quakes may yet occur.

Evidence also reveals volcanism, faulting and surface water flows within the past 10 million years in Cerberus Fossae, a series of troughs that slice up the volcanic plains of InSight's study area, Elysium Planitia.

"If you just take up a simple model of the thermal evolution of Mars, we wouldn't really expect such recent volcanism in that area. So as we learn more about the specific type of geologic activity we're seeing in that region, it's going to tell us a lot more about potential variability around Mars," said Sue Smrekar of JPL, deputy principal investigator for InSight.

That variability could include crust containing radiogenic materials like uranium, which could cause localized heating. Magma chambers could lurk below, releasing their contents as they cool, or volatiles like water or carbon dioxide, which would aid in the melting process, could exist in the crust.

Measurements of the propagation of earthquake waves through Mars's crust support the latter possibility, but scientists will require more data before they can test any such hypotheses.

Those measurements also suggest the top 5 to 7 miles of the crust is highly altered or fractured, although how much is due to impacts versus other causes remains unknown.

Catherine Johnson of the Planetary Science Institute in Tucson leads Insight's magnetometer group. She reports a steady magnetic field 10 times stronger than expected, caused by rocks magnetized by Mars's ancient global field before it shut down 4 billion years ago.

"The little magnetic minerals in the rocks line up with that field, and the rock becomes magnetized. And as it cools, that magnetization is essentially frozen into the rock," she said.

That those rock blocks have remained magnetized all these years also reveals something about their thermal history.

"If they'd can heated up above a few hundred degrees centigrade, then the magnetization that was in them would have been essentially wiped out," said Johnson.

The data also suggest Mars's internal dynamo was comparable in strength to Earth's.

Johnson's team also found much smaller, more transitory magnetic variations caused by electric currents in Mars's upper atmosphere. The currents arise from interactions with the solar wind and vary from day to night.

In a novel approach to subsurface imaging, InSight scientists used surface deformation caused by more than 10,000 dust devils and other wind vortexes to probe the characteristics of near-surface material.

A weather package included in the lander has also revealed further details about Mars's thin atmosphere, which has an average pressure 0.6 percent Earth's. Scientists included it chiefly to monitor atmospheric activity that might add noise to seismometer data.

"It's actually turning out to be an incredible weather station that is telling us about the behavior of the atmosphere at the surface with a precision and a breadth that really is unprecedented," said Banerdt.

The Interior Exploration using Seismic Investigations, Geodesy and Heat Transport (InSight) mission landed on Mars on Nov. 26, 2018. It is scheduled to run for 728 Earth days, or 708 Sols (Mars days).