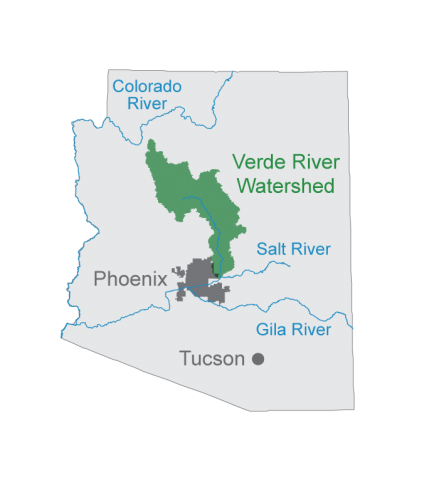 The Nature Conservancy.
Location of the Verde watershed in Arizona.

The Verde River supplies drinking water to more than 3 million Phoenicians and supports irrigation, recreation and local economies in Prescott and the Verde Valley.

But a new report by the Nature Conservancy in Arizona grades the quality of its water, communities and habitats at just above average.

The report is available at verdereportcard.org.

The Verde River varies widely over its 190-mile run from its groundwater origins in the Chino Valley to its terminus in the Salt River and Phoenix reservoirs, from its Verde Valley agricultural and recreational zone to its untouched Wild and Scenic River region.

The study reports high scores for recreation access and visitor satisfaction, but only average water and habitat scores and poor grades for baseflow and water quality monitoring. 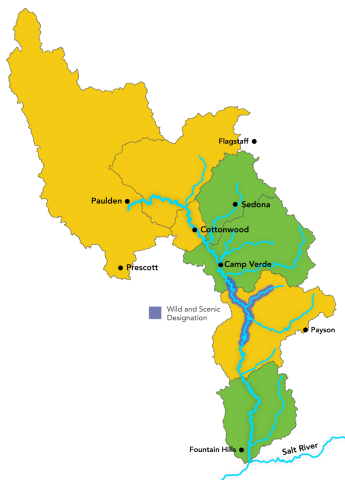 The Nature Conservancy.
The Verde watershed's grades by region. Yellow and green indicate a moderate score (40-59 percent) and a good score (60-79 percent), respectively.

"And I think that's what the report card helps us do, is to say, 'Here are our challenges. Here's where we're at with these things. Now how are we going to solve these critical problems together?'" she said.

Schonek said she was surprised and encouraged by the fact that different groups shared such similar goals for the river.

"They wanted the river to flow. They wanted to have water in their public places. They cared about the habitat. They wanted it to be of a quality that was healthy and provided scenic beauty. And they also wanted good, healthy human communities," she said.

Wild rivers are typically remote and inaccessible only by trail. Scenic rivers are sometimes accessible by road, but their shorelines and watersheds remain largely undeveloped.

In Arizona, only a 40-mile portion of the Verde River and a 17-mile stretch of its tributary, Fossil Creek, hold the designation.