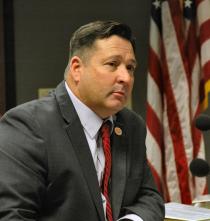 MARK BRODIE: State lawmakers come back to the Capitol today with a bevy of issues on their agendas, ranging from rideshare fees to citizen initiatives to university speech. Howie Fischer of Capitol Media Services is here to guide us through the week ahead under the Copper Dome. Hello, Howie.

HOWARD FISCHER: Hello. It's going to be yet another crazy week at the legislature.

BRODIE: That's why we have you down there to watch it for us. So let's start with the House Education Committee today. They're dealing with a bill that would essentially require universities to address all sides or more than one side of an issue if they're having a speaker come to campus. Is that right?

FISCHER: Well, Rep. Anthony Kern, who's from Glendale insists that what's being presented to students — not so much in the classroom, but in terms of speakers on campus — is pretty much one-sided. So what he wants is each university set up an office of public policy that would both monitor what's going on and then seek out and pay honoraria, if necessary, to speakers to come in and present alternate viewpoints. He contends that would ensure that students get a balanced point of view. Now this gets problematic since, in fact, that isn't the university who arranges a lot of the speakers. It's student groups. And that puts the universities in the position of saying, do we balance off every student group? And then we get into some interesting questions there as to well, what what questions require another side? If somebody says, "I'm here to tell you the earth is flat," do you need someone else? Or conversely, I'm here. You know, if you have somebody talking about, let's say billions of years of geology, do you need somebody to come in and say, "We've only been here for 6.000 years"? It gets really problematic.

BRODIE: Well, does the bill address that? For example, if you have a, let's say, a Holocaust survivor, come and talk, does the university that need to come and pay a Holocaust denier to come in and give the "other side of the issue"?

FISCHER: Well, that's been the tricky part. I mean, on one hand, Mr. Kern tells me that, no, not everything requires a counterpoint. But when I pushed him on it — and specifically the issue of Holocaust — he told me, "I don't think there are any limits to free speech in the country we live in." Essentially saying, yeah, let's bring in all takers, all all points of view.

BRODIE: All right. So Howie, also today the House Regulatory Affairs Committee is going to be taking on a bill that I think a lot of people have been talking about this issue of rideshare fees at Sky Harbor and other airports. This bill would essentially tell cities that they are not allowed to impose fees on rideshare companies.

FISCHER: Exactly. This goes even farther than what the argument is right now between the attorney general's office and the city of Phoenix, the attorney general's office is telling Phoenix you cannot raise your fees. This would, retroactive to Jan. 1, 2018, two years ago, say you cannot charge a fee to a "transportation network company," specifically meaning places like Uber and Lyft and saying that if in fact, they are doing anything, an airport cannot charge any fee, not just an airport. It prohibits a public body from assessing any tax, fee, charge or assessment on a transportation network company. This is interesting. This is the question of whether we should be encouraging disruptive technology or whether they should be paying what some people would say their fair share is. And this should be very heated this morning.

BRODIE: Is this one of those bills that cities will argue is preempting them from doing what they need to do?

FISCHER: Well, let's put it this way. Cities argue everything preempts them from doing what they need to do. But the question becomes, at what point should somebody pay their fair share? Well, what is a fair share here? You know, I'd love to say I know exactly what is the fair share of what someone should be paying. I don't know. If taxis pay a fee to use the airport, should a right your company have to pay a fee to use the airport? That's that's the issue.

FISCHER: Well, at this point, I think they're deciding, if you will, the shape of the table, you know, sort of how do we proceed? I think one of the things that's definitely going to be ahead of the Ethics Committee is not repeating the mistakes of the Don shooter case, where, in fact, the thing was handled totally by outside investigators. The investigators presented their report to the legislature and the legislature then voted to oust Mr. Shooter. I think that left a lot of bad taste in a lot of people's mouths. And whether you think Don Shooter is pond scum for his activities, he didn't get a chance to present his case. Normally, ethics committees have hearings. They allow the accused to present the case, to confront witnesses, present his or her own witnesses. And I think, in this case, they want to make sure that they do this in a way that's going to protect rights. Because you may remember that Mr. Shooter still has a case in the Ninth Circuit Court of Appeals where he says his due process rights were violated.Now so far, he hasn't gotten a federal judge to agree with him. But that's an interesting question: Do lawmakers have due process rights, and who gets to protect them?

BRODIE: Well, and we should point out that the House has, in fact, hired outside counsel to investigate Rep. Cook, right?

FISCHER: Oh, yes. And that's not surprising. I mean, that's usually done where you get somebody to go in and look and take statements from witnesses and do it in a way where not everything is initially presented. In some ways, it parallels the impeachment investigation, where the investigators did some closed-door hearings and they actually had outside people doing depositions with people. So you know what the lay of the land is, and then you can decide once you've got at least the preliminary findings, is there enough to go forward there? You remember, there are two issues here. One is a supposedly improper relationship with a lobbyist, and the other has to do with potentially seeking illegal campaign contributions or promising them to the county sheriff. And they've got to find out, well, at least what are the basic facts on the ground. And that's the first step. And that's why you hire an outside investigator.

BRODIE: All right, Howie, just a few seconds left. I want to ask you about a bill that we have talked about many times in the past. There's yet another attempt to give Arizona a lieutenant governor, make them second in command as opposed to having the secretary of state. This would have to go to the voters. Any idea or any feeling that there is more appetite for this at the Capitol now than any of the countless times this has been tried before?

FISCHER: No. I mean, there may be appetite at the Capitol. I mean, they see situations where all of a sudden you've changed parties. I think there's a fear that if somehow Doug Ducey were to feel a draft from Washington, that suddenly Katie Hobbs, a Democrat, would wind up as governor. But the fact remains that a lot of people say, what do we need another paid public official for to stick in there as lieutenant governor? I understand the federal precedent of having a president, vise president elected on a ticket. But voters did reject this. They've they've said we don't want anyone else. We don't see a particular problem. If, in fact, when Janet Napolitano left, we got Rose Mofford.

FISCHER: I'm sorry, Jan Brewer. That's right. It was when Mecham left, se got Rose Mofford. I'm sorry. See, all this stuff starts running together after a while. And, you know, somehow the world did not end — although Democrats may believe when Jan Brewer took office, the world ended. But the fact is that people say, why do we need another high paid state official and a staff to go with that? And so, does it get out? Possibly. If it goes to the voters, I'm going to bet you lunch it doesn't pass.

BRODIE: All right. We'll see who's paying next time we have lunch. That's Howie Fischer of Capitol Media Services. Howie, as always, thank you.

FISCHER: Glad to be here.