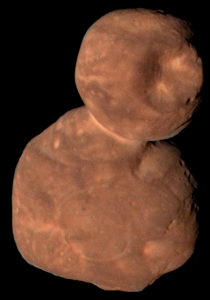 In early 2019, the New Horizons spacecraft flew past a peanut-shaped object beyond Pluto that scientists hoped might preserve remnants of the earliest solar system.

Now, researchers have released a series of papers in the journal Science updating what we know.

Finding a good model of how the mini-planets called planetesimals first clumped together in the embryonic solar system is tricky: Asteroid exteriors are battered by micrometeorite impacts and comet surfaces evaporate as they approach the sun.

Worse, physics models show the aggregation process breaks down when objects grow beyond a few inches or feet: Either surrounding gas slows them down and they fall into the sun, or they crash together and fly apart instead of clumping into a larger mass.

So how do two bodies draw close enough together for gravity to overcome other forces bent on their downfall?

In Arrokoth, with its smooth bi-lobed structure suggesting two tentatively merged spheres, many scientists saw their best chance of answering that question. Once informally known as Ultima Thule, the object has remained unchanged since it first formed in the infant solar system's frigid outer reaches.

According to the new research, Arrokoth supports the theory planetesimals formed from clumps of matter that slowly "docked" like spacecraft.

"The community was coming around to some sort of collapse being probably the way that planetesimals get made, but it really crystallizes it when you see one and you say, 'Oh yes, there's just no other way that could have happened,'" said lead author Will Grundy of Lowell Observatory.

Grundy and his colleagues think a cloud of small objects came together due to instability in the cloud of gas and dust, or nebula, from which the solar system formed. Rather than suffering the drag described above, some of the clumps could have drafted in the wake of others, like competitive bicyclists.

In November 2019, following a NASA request, the International Astronomical Union and Minor Planets Center, which has final say on the naming of Kuiper Belt objects, officially renamed Kuiper Belt object 2014 MU69 "Arrokoth," which means "sky" in the Powhatan/Algonquian language.

Arrokoth measures 22 miles across and orbits the sun roughly 44 times the distance the Earth does. Its surface temperatures range from -440 to -423 Fahrenheit in winter to a balmy -370 to -350 K in summer, and it takes 298 Earth years to circle the sun.