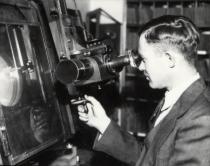 Lowell Observatory Archives.
Clyde Tombaugh at a machine called a Zeiss Blink Comparator, used in the discovery of Pluto. Two glass plates of the same area of the sky were blinked back and forth to look for the movement of objects against the background stars.

Lowell Observatory will celebrate the 90th anniversary of Pluto's discovery with events on Feb. 15 and 18.

A rededication of that instrument will accompany several talks, a book signing and a space art exhibit.

Also on offer: a Pluto-themed song by the Flagstaff Community Band, a commemorative Pluto Porter by a local brewery and a chance to sample the Pluto Roll at a sushi shop visited by Tombaugh when it was still the Black Cat Cafe.

Events at the observatory kick off at 10:30 a.m. Saturday and are covered by the standard entry fee.

More information is available at iheartpluto.org.