On May 3, 1887, a magnitude 7.6 earthquake struck Arizona from across the Mexico border just south of Douglas. Newspapers, letters and other documents reveal the Pitaycachi quake shook a 770,000-square-mile area (2 million square km.) extending from Prescott to Yuma to El Paso, Texas.

“The surface fracturing and movement was recorded over a distance of about 41 kilometers and had several segments to it,” said Dave Brumbaugh, director of the Arizona Earthquake Information Center at Northern Arizona University. 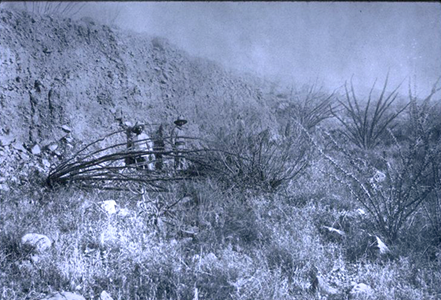 Camillus S. Fly; Seismological Research Letters; Arizona Geological Survey
Photo from 1887 by Camillus S. Fly of the Pitáycachi earthquake rupture scarp, estimated here at more than 14 feet tall. The two are standing in a ﬁssure or crevice that developed along the scarp.

The largest quake known to have ever occurred in the Basin and Range Province, Pitaycachi was what geologists call a “normal fault.” Normal faults occur when crustal motion pulls apart two blocks of rock, causing one to slip downward.

Though history records no Arizona deaths, the quake killed as many as 60 people in Mexico.

“There were a lot of rockslides and cracked foundations and buildings and that sort of thing,” said Jeri Young Ben-Horin, who operates the Arizona Broadband Seismic Network for the Arizona Geological Survey at the University of Arizona.

Did The Earth Move For You?

Within Arizona, at least 20 quakes of magnitude 5.0 or higher have struck since 1850. Although we barely shimmy compared to California, tremors assault our state more often than most, Ben-Horin said.

“If we look at, say, just the magnitude 3.0s and higher, and we compare that to other states, we're about in between 11th and 14th place,” she said.

Quake estimates present several problems; we only record the quakes we detect, and lower magnitude quakes happen exponentially more often than powerful ones.

“There are areas of Arizona where we don't have many earthquakes or we don't actually see them very well simply because we don't have the coverage we would like to have to locate them,” Brumbaugh said. 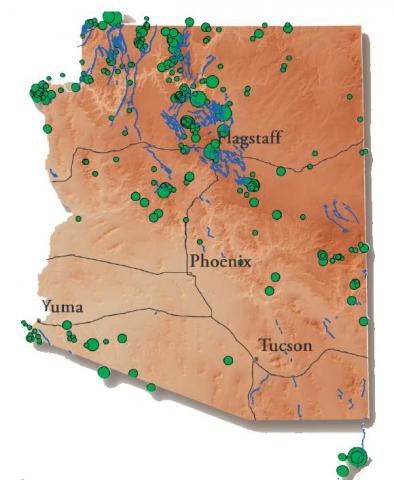 Arizona Geological Survey
Faults active during the past 1.6 million years (blue) and historic earthquake epicenters (green, with larger circles representing larger earthquakes). Only earthquakes of magnitude 3.0 or greater are displayed.
Ben-Horin operates 15 seismic stations that can detect ground motion from global earthquakes, local and regional quakes, nuclear blasts and other sources. She estimates several hundred quakes happen each month, and a magnitude 4 or 5 quake crops up every eight years or so.

In 2016, a swarm of 75 earthquakes occurred west of Grand Wash over a two-month period. Ramon Arrowsmith, a geologist at Arizona State University’s School of Earth and Space Exploration, led a study that measured 600 earthquakes in 19 months.

“But most of them were small. They were 1s and 2s. And so they weren't felt by people in general, but they showed these same zones of activity,” Arrowsmith said.

Northern Arizona And The Seismic Belt

Those zones include the Arizona Seismic Belt, which swoops diagonally from the northwest near St. George, Utah, through Tonto National Forest and east toward New Mexico. Here, quakes in the 3 to 5 range occur roughly every 10 years, mostly in the north.

“We have very large faults in the north part of the state that are capable of generating up to magnitude 6.9 to 7.1,” said Ben-Horin.

Felt across northern Arizona, they ranged from 6.0 to 6.2.

The 1912 quake likely originated on the 25-mile Lake Mary fault zone that runs from south of Mormon Lake to southern Flagstaff. Like most faults in Arizona, it is a normal fault. 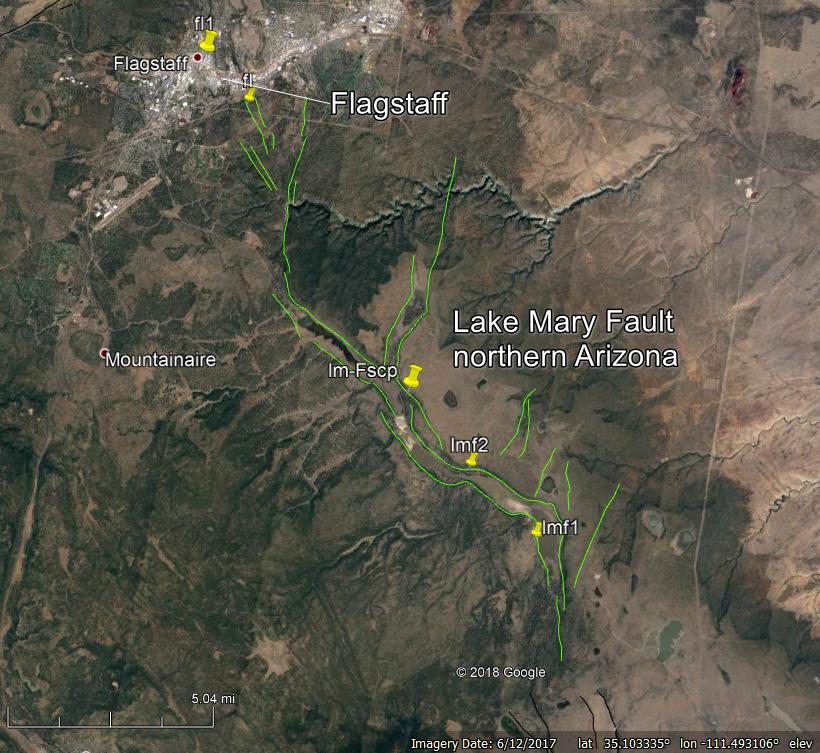 Arizona Geological Survey. Map produced using Google Earth.
The 25-mile-long Lake Mary fault extends from Mormon Lake north to the city boundary of Flagstaff. It comprises dozens of active fault strands. If the entire fault ruptured, it would produce a M7 earthquake that would damage buildings in Flagstaff.

The other quakes probably spawned from the Cataract Creek fault to the northwest of the city. Quakes measuring 5.0 and 5.4 shook that fault in 1993. More recently, residents of Kachina Village 15 miles south of Flagstaff experienced a 4.7 quake.

The area remains a source of concern for earthquake experts. In the unlikely event the entire fault moved at once, it could produce a maximum quake of magnitude 7.0, threatening 70,000 Flagstaff residents and stressing buildings often constructed from unreinforced masonry.

“The Lake Mary fault is the most serious earthquake threat to the city of Flagstaff that we have,” said Brumbaugh.

Today, much concern focuses on the faults bordering the lake, which stores much of the city’s water.

“We've been trying to get this message out to county and city emergency managers for 10 years that I've been working here – and longer since other people have worked for the survey,” said Ben-Horin.

Though not as active as the northern part of the state, central and southern Arizona pack their share of faults, including the Big and Little Chino faults north of Jerome.

“A lot of them don't look very active, but they still have the capability of generating moderate to larger earthquakes,” said Ben-Horin.

Phoenicians might recall the 4.1 quake that shook the Valley in 2015. Some, like Arrowsmith, chuckle when they do.

“Of course, all the jokes were that just a few saguaros fell down, but it definitely gets people's attention.”

Farther south, Yuma has the Algodones fault, which hugs the fringes of the San Andreas system. It is a strike-slip fault, a type of fault in which means one block slides past the other sideways.

“Also, in southern Arizona around south of Tucson, there's a big fault called the Santa Rita fault, and that leaves a step in the foothills,” said Arrowsmith.

So what causes these quakes? It’s complicated. Some stem from local forces; others, from 30-million-year-old regional influences, reaching back to when the plate boundary along the Pacific coast changed, creating the san Andreas Fault and replacing uplift with regional expansion.

“I think that a lot of the earthquakes that we get up here, for instance, in the northern Arizona Seismic Belt, are the results of the continued expansion of the crust of the Earth,” said Brumbaugh.

Surprises still lurk deep beneath the surface, though, and a seemingly dormant fault need not stay quiet forever.

“Even if they don't look like they're that active, say a hundred thousand years, they're still capable of generating large events,” said Ben-Horin.