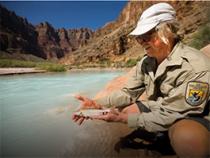 The U.S. Fish and Wildlife Service has proposed downlisting the humpback chub from "endangered" to "threatened" status.

The humpback chub, so named for the pronounced hump located between its gills and dorsal fin, was first listed as endangered in 1967.

Now found in six isolated populations in Arizona, Utah and Colorado, the fish likely once dwelled throughout the Colorado River basin before the construction of Flaming Gorge, Glen Canyon and Hoover dams, which altered its habitat and cut off its migration routes.

Since then, competition, predation and possibly pesticides and interbreeding, have further reduced its numbers.

Some experts view the humpback chub as a health indicator for Colorado River ecosystems, including the Grand Canyon, so its recovery could be a good sign for those areas.