Untold Arizona: Arizona University Mascots A Century In The Making 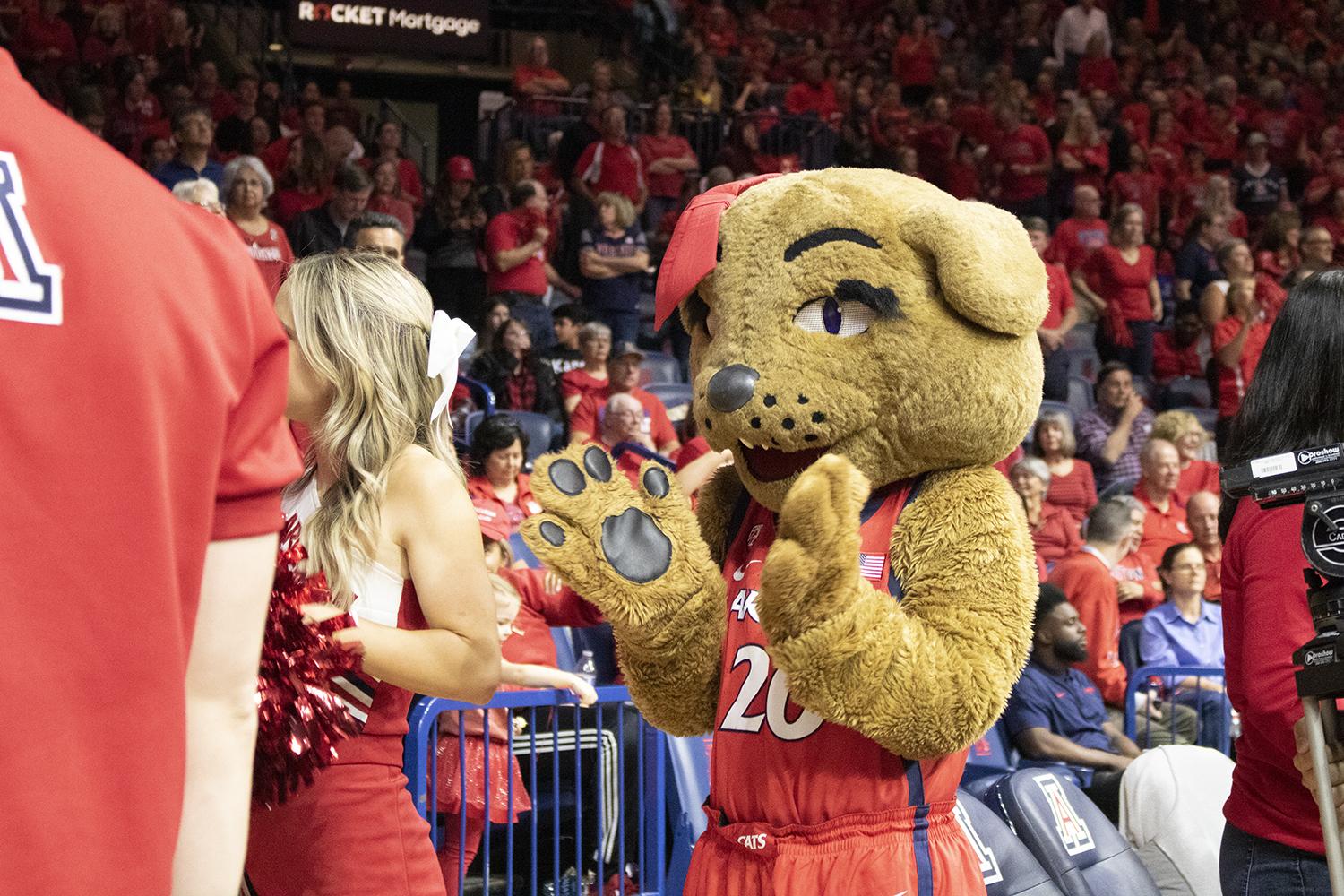 Ben Giles/KJZZ
Wilma Wildcat cheers on the University of Arizona women’s basketball team during a Jan. 24 game against ASU.

It’s Friday night in Tucson, and the McKale Center is thumping.

The University of Arizona women's basketball team is hosting their rival, Arizona State University. There’s a record crowd on hand to watch the game, the first in history in which both teams are ranked among the top 25 teams in the nation.

And as the hometown Wildcats take the court, they’re greeted by a different kind of wildcat: Wilma, mascot and longtime partner of Wilbur Wildcat.

The history of the wildcat name, and the mascots for Arizona’s two other state universities, are more than a century in the making. 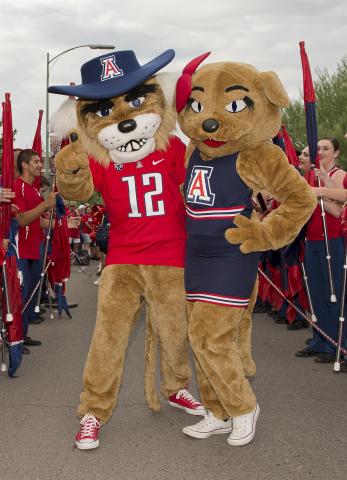 The University of Arizona adopted its namesake after losing a football game in California in 1914. Even in defeat, a Los Angeles Times columnist wrote that the team “fought like wildcats.”

“Us being in the desert, obviously we have bobcats, so I feel like that was an easy transition into the cat world, so to speak,” said Roberta Stout, who runs the Hall of Champions at the McKale Center.

At the time, students were so enthused with the wildcat name that the freshman football team raised more than $9 to purchase a live bobcat in 1915, Stout said.

“From what I know, he jumped off a tree and didn’t really make it off the tree. … He hung himself, yeah, he did,” said Rebecca Determan, an alum who performed as Wilma Wildcat. “He legally needed to be on a leash, and that leash hung him.”

Undeterred, the university kept live bobcats as mascots through the 1950s, Stout said. It wasn’t until 1959 that Wilbur Wildcat made his debut, in costume, at a football game against Texas Tech University.

Wilma was created more than 20 years later by accident.

“You know, a lot of great things come out of accidents so to speak,” Stout said. “They were getting a new suit for Wilbur, and the story goes is when it came back, it seemed more feminine in nature, and so they decided that they were going to make him a partner.”

Wilbur and Wilma were set up on a blind date, and were quickly wed after that. The pair make University of Arizona one of the rare universities with two mascots, but also mascots that are married.

Determan said the wedding was a fitting touch for Wilbur and Wilma’s story.

“I think it goes back to just the traditions of the University of Arizona, and everything is embedded in transition at the university,” she said. 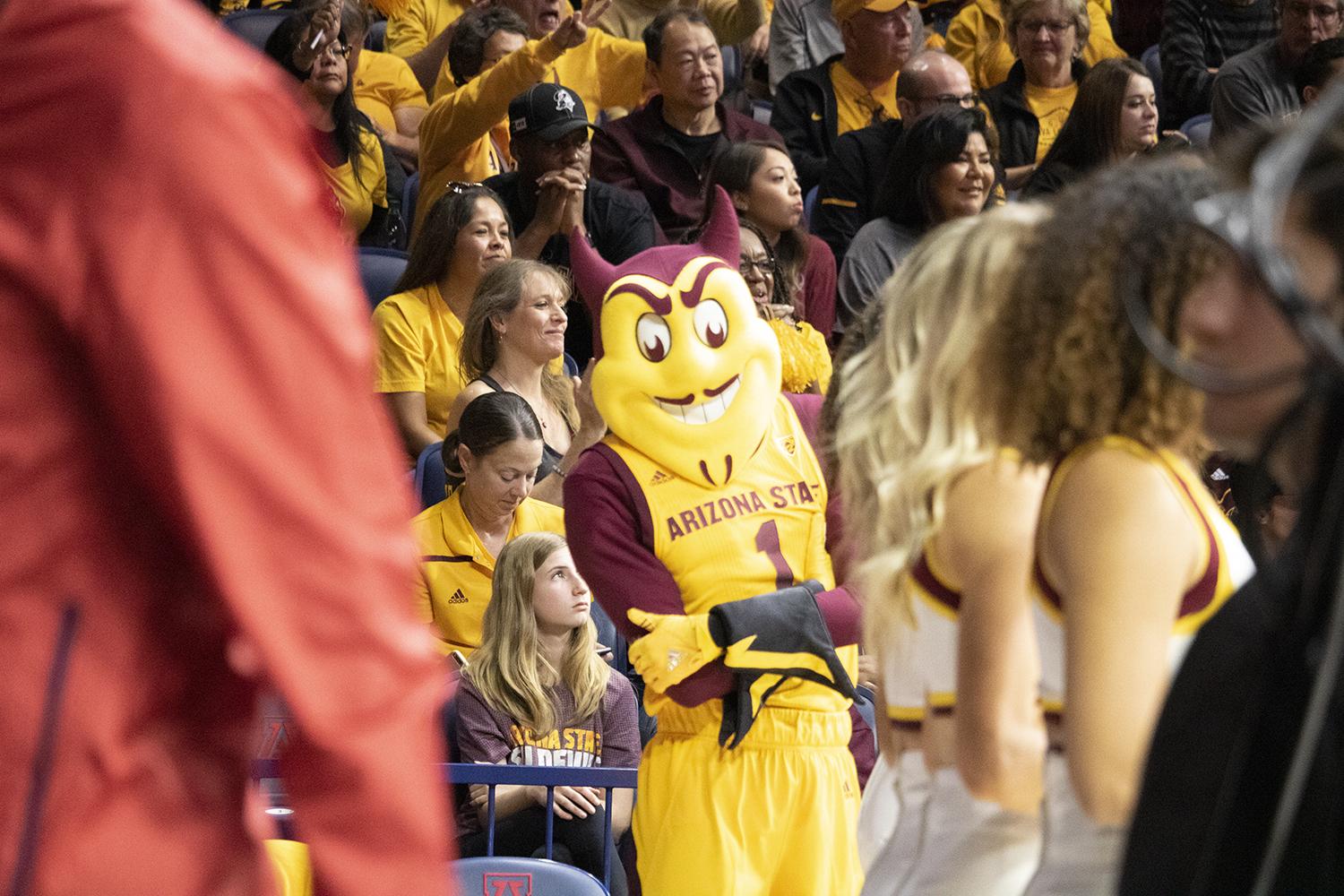 Ben Giles/KJZZ
Sparky looks on from the sidelines as the ASU women’s basketball team falls to the University of Arizona on Jan. 24 in Tucson.

Across the court that night is another mascot: Sparky the Sun Devil. Unlike the wildcat, Sparky hasn’t always been the face of Arizona State University.

ASU Archivist Robert Spindler said teams went by the Normals as early as 1899. The moniker matched the school’s name at the time, the Territorial Normal School.

By the early 1920s, ASU was known as the bulldogs.

“An interesting choice ultimately because there were other teams known as the bulldogs at that time, but in this case there actually was a bulldog that was associated with the name and traveled with the team, things like that,” Spindler said.

In 1946, a group of university boosters known as the Sun Angels were brainstorming team names that would distinguish ASU from other schools. 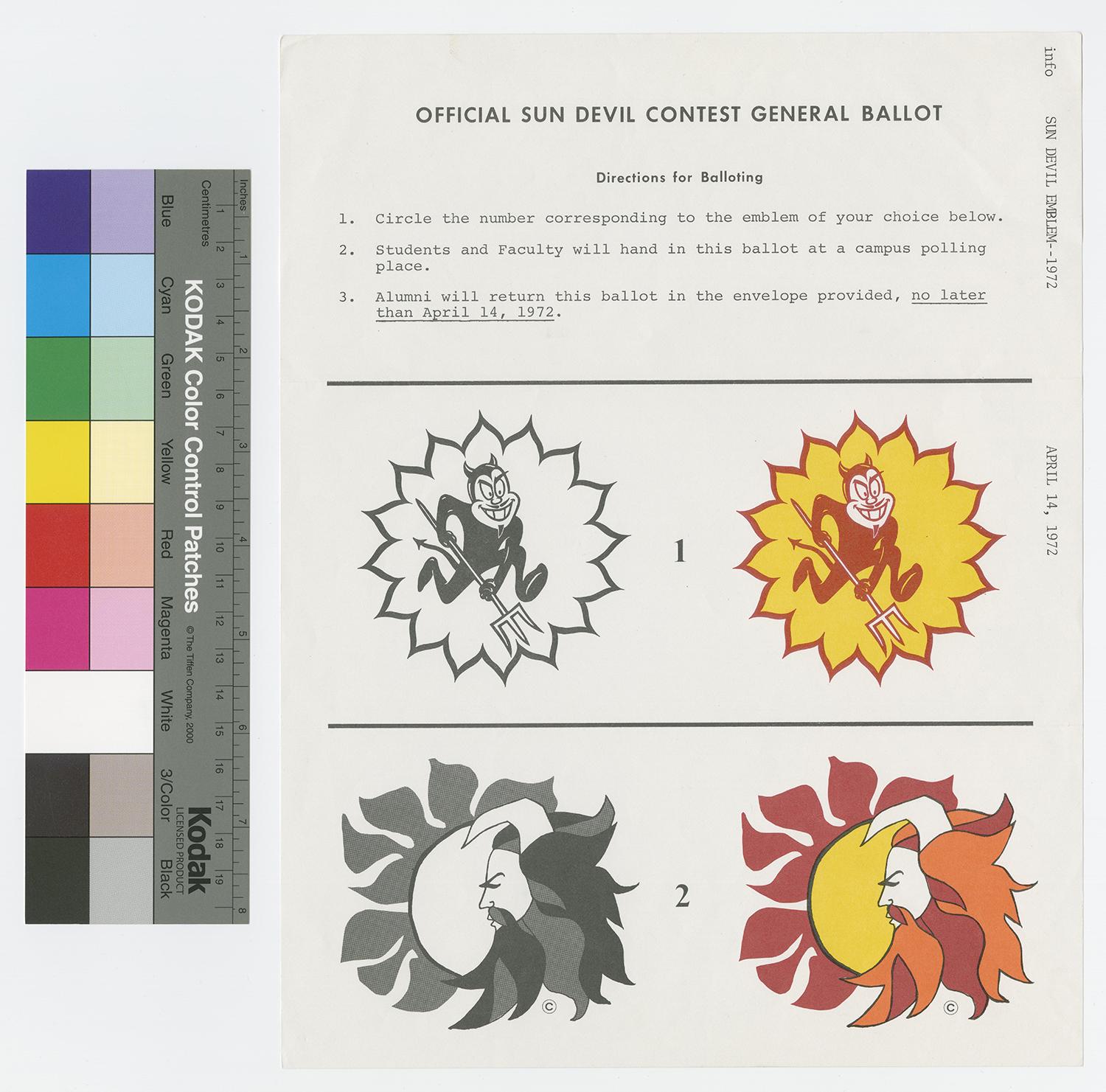 “They had noticed that Duke (University) had named their team the Blue Devils, and there was some interest in the concept of sunshine. They arrived at this idea of a Sun Devil, and in fact brought it to the students in 1946,” Spindler said. “They had an election and the students supported renaming from the bulldogs to the Sun Devils.”

A year later, a booster hired Berk Anthony, a former illustrator at Disney, to design the first Sun Devil Logo. The mascot’s image has gone through various changes since then.

The Sun Devil mascot has had its fair share of controversy. In the 1960s, ’70s and ’80s, concerns were raised about Sparky’s satanic appearance.

An election was held in 1972 giving students a choice to keep Sparky’s original appearance or adopt a more viking-like Sun Devil logo. Spindler said students’ votes were overwhelmed by alumni, who were also allowed to cast ballots and favored the original design.

Concerns peaked in the 1980s, when Pope John Paul II traveled to Arizona for an event at Sun Devil Stadium in Tempe.

“Vatican staff required that all references to and images of the Sun Devil be covered up at the time of the pope’s presentation in Sun Devil Stadium,” Spindler said.

Nevertheless, Sparky has survived the test of time.

“By and large people like the Sun Devil because it’s unique, and it speaks to us about what it’s like to live here in the Valley,” Spindler said. 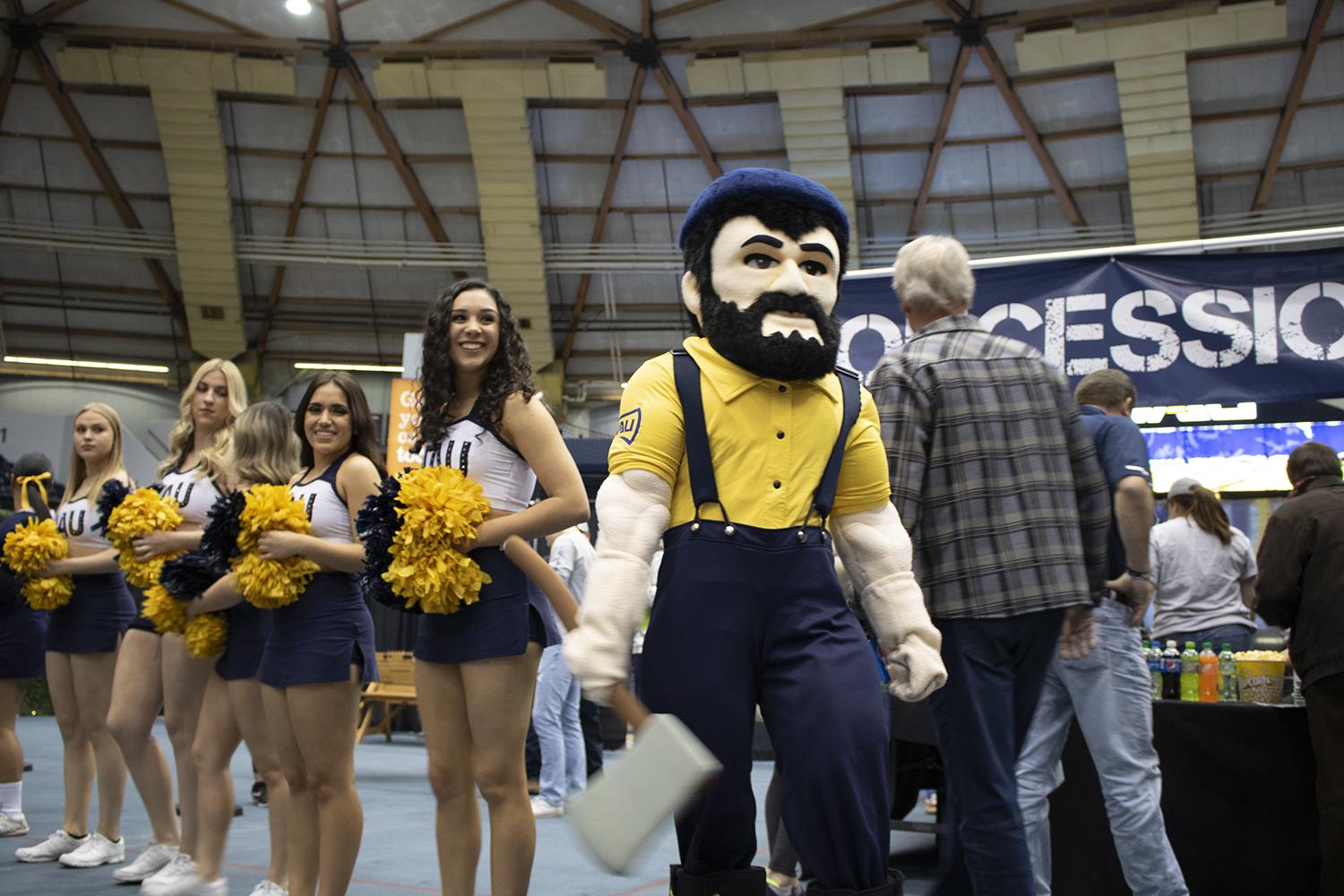 Ben Giles/KJZZ
Louie the Lumberjack gets ready to welcome the NAU men’s basketball team to their home court on Jan. 27.

In Flagstaff, Northern Arizona has always had one mascot and one mascot only: The lumberjack.

“The mascot name, the moniker, actually goes back to I believe 1915,” said Adam Ojeda, NAU’s trademark and licensing manager. “Obviously being in Flagstaff and the logging industry at the time, the university picked up the name lumberjacks because it just quite frankly made sense, based on our industry and where we were at the time.”

Before there was a real live lumberjack mascot at games, the name stuck, and students rallied around a heavy bronze axe, according to archivist Sean Evans.

“The way that worked is they would prang that thing into a log, which is why this thing started out straight and now has a deft curve in it and a few bronze repairs,” Evans said. 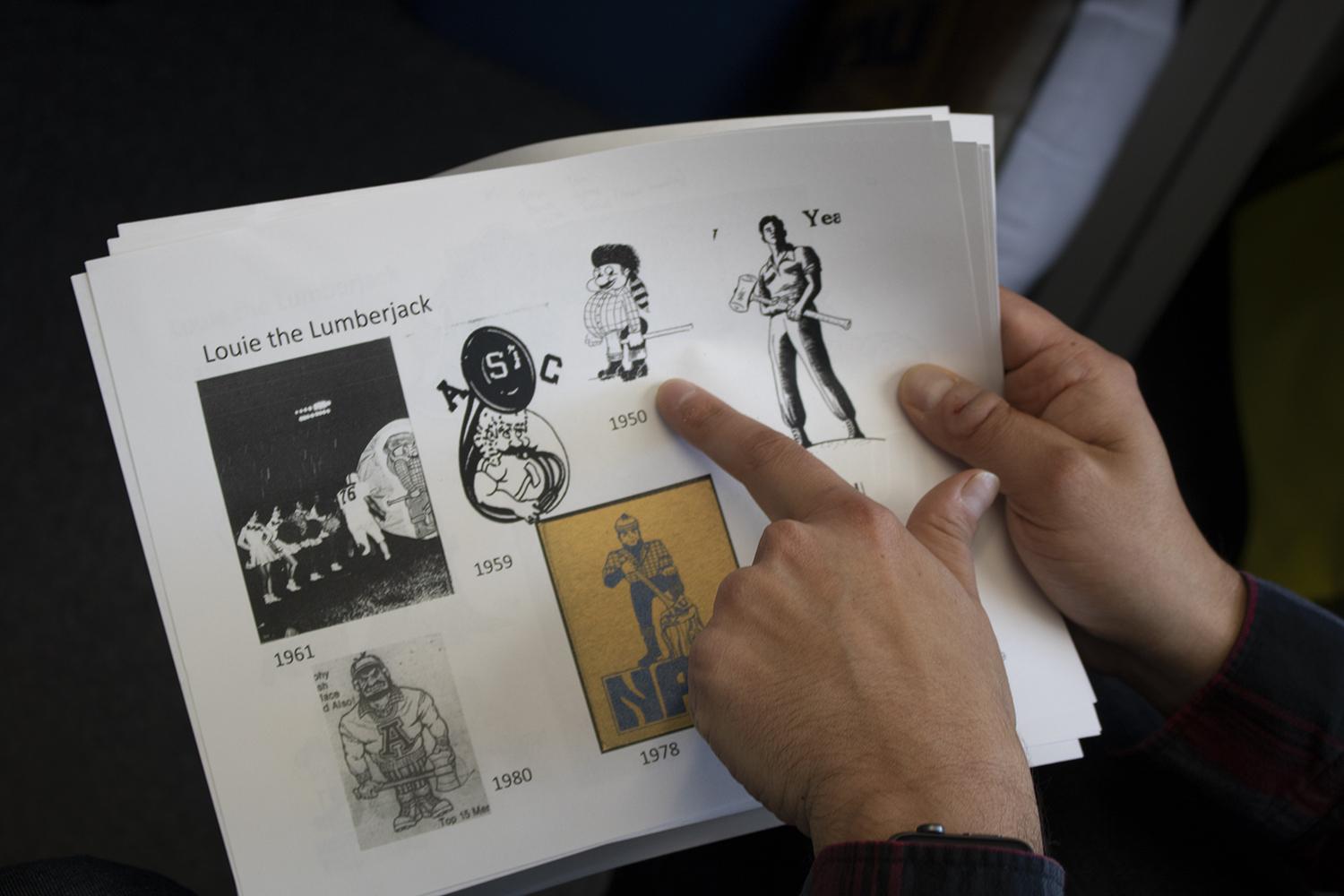 In yearbooks and university publications dating back to at least the 1920s, various iterations of the lumberjack are drawn.

That’s consistent with the mascot’s history, which has been largely student-driven. It wasn't until 1964 that the Lumberjack got a name and was officially adopted by the then Arizona State Teachers College.

They called him Louie, an homage to a popular Kingsmen song at the time, “Louie, Louie.”

Despite his varied appearance in drawings, the lumberjack has a few common looks. He’s often holding an axe, leaning against a tree stump.

Then there’s the somewhat terrifying version of Louie that debuted in 2005.

We referred to him quite frankly as the abominable snowman Louie. He was gray, he had that great big oversized beard,” Ojeda said. “He looked like one of those Christmas cartoons that you see, the claymation guys.”

Louie’s current design presents a Lumberjack that’s intimidating, but much friendlier, roaming the sidelines at a recent basketball game to high-five fans.