Phoenix Exhibit Shows Haunted Faces Of Those Who Witnessed Holocaust

Download mp3 (5.88 MB)
Phil Latzman/KJZZ
“In Broad Daylight: The Holocaust by Bullets,” a photographic exhibit, is on display at the state Capitol Museum and at Phoenix’s Burton Barr Library.

The pictures are haunting.

They’re not of dead bodies. They’re from people who are very much alive today, many decades after witnessing mass atrocities.

Sheryl Bronkesh is president of the Phoenix Holocaust Association, which helped.

“To me, the big takeaway is that people knew what was happening," Bronkesh said.

The haunted faces are part of “In Broad Daylight: The Holocaust by Bullets,” a photographic exhibit on display at the state Capitol Museum and at Phoenix’s Burton Barr Library.

“They didn’t perpetrate this. They did not. However, when everyone is complicit and doesn’t speak up, that’s how murder can happen,” Bronkesh said.

Phil Latzman/KJZZ
"“To me, the big takeaway is that people knew what was happening," said Sheryl Bronkesh, president of the Phoenix Holocaust Association.

The faces come from Eastern Europe, and the people in them are mostly in their 90s now, having lived through the nightmare of the Second World War.

Marco Gonzalez is executive director of Yahad-In Unum, a Paris-based organization combining the Hebrew word for "together" with the Latin phrase "in one" dedicated to documenting evidence of the Holocaust in Eastern Europe to work to prevent future genocides.

“I think it’s time to talk to the new generations," Gonzalez said.

It’s through his organization that the gallery exhibit has come to Arizona.

“And this is why we need to show the proof that this was a crime and that it was a genocide, first of all, so that the new generations understand, because they feel more related to the word genocide than to Holocaust (which) they believe is very far,” he said.

The Guatemalan-born Gonzalez was a witness to human rights abuses in his own country and in many parts of central America.

“I was aware that a lot of crimes were committed against indigieous people in Guatemala. And also I grew up having a special sensitivity about mass violence.”

So Gonzalez chose to be an upstander, not a bystander. And he now encourages others to do the same.

“Acts of crime that happened in Eastern Europe in the Second World War against the Jews, against the Roma, against the gays--everyone who was different, could happen again today," Gonzalez said.

That’s the lesson he hopes to pass along to younger generations.

“Seeing all the pictures just showed to me how planned out everything was that took place," he said.

“I definitely think it could happen (today) because there are people out there that are filled with hate. But I feel if people like us went through the steps and made it known that it was such a terrible occurrence that we can get it out there that it shouldn’t happen again," she said.

Her classmate and fellow junior Dawson Debevec has also made it his mission to  get the word out.

“My presentation that I picked was about Holocaust denial. And through all of that research that I conducted, I feel that there’s definitely a need for every student to know and everyone to know," Martin said.

Kim Klett has taken them to the Capitol. She teaches an English Literature Dobson High School and specializes in Holocaust studies. She tells her students that genocides happened right here in Arizona as well.

“My hope is that they learn from the history and see that it is still happening today, and that they learn that they have voices and can make choices everyday and that by making good choices to help others and get involved and not be silent and not be bystanders, that they can actually do something to prevent this in the future," Klett said.

A bill introduced in the Arizona House this session would require the Holocaust and other genocides be in the curriculum, and taught in state schools at least twice between seventh and 12th grades.

Meanwhile, the exhibit, “In Broad Daylight: The Holocaust by Bullets” can seen in limited form at the state Capitol Museum. A larger gallery of photos will be on display at Phoenix’s Burton Barr Library starting this weekend.

EDITOR'S NOTE: The story has been updated to correct the spelling of Sheryl Bronkesh's name. 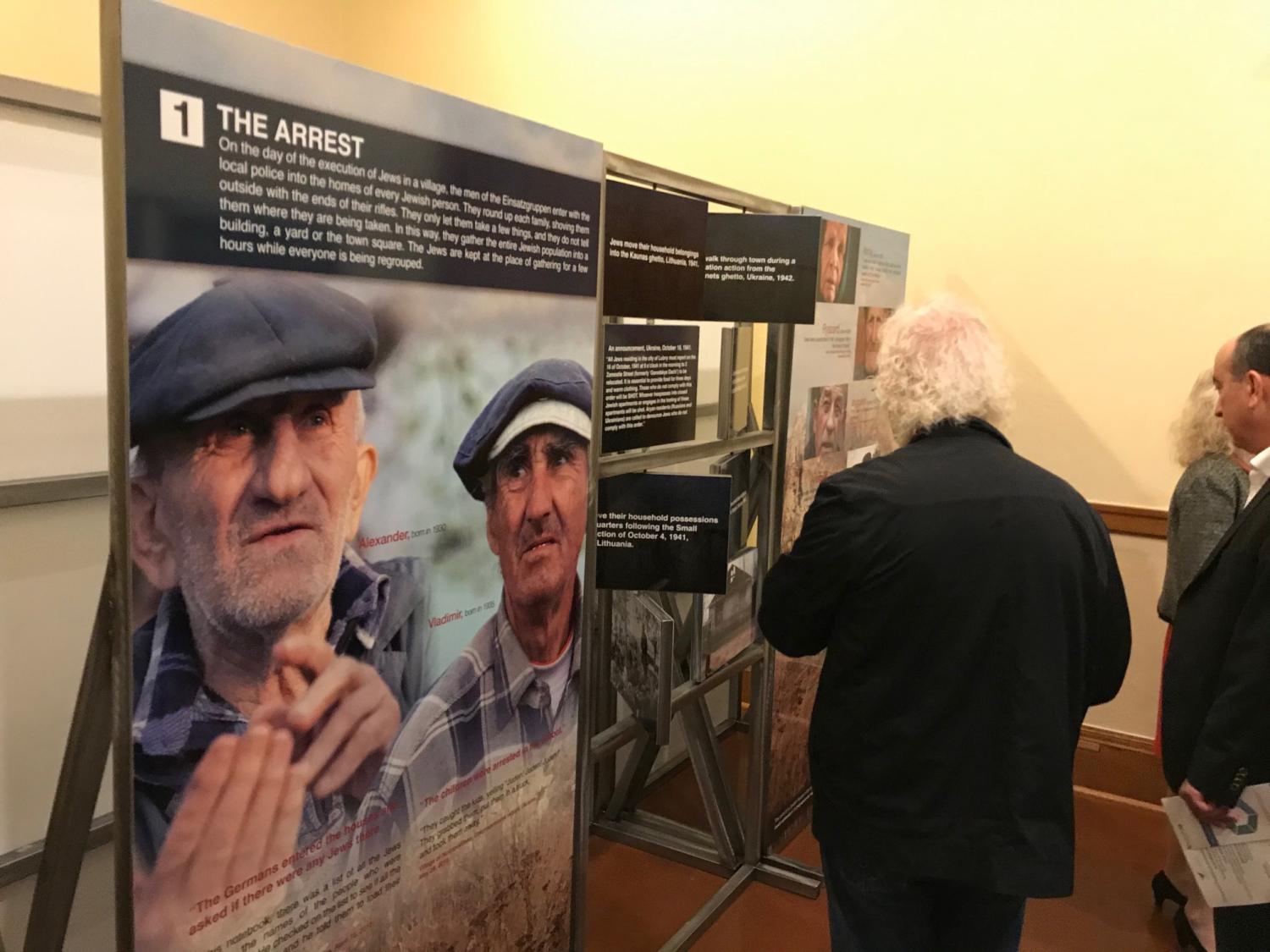 Phil Latzman/KJZZ
“In Broad Daylight: The Holocaust by Bullets,” a photographic exhibit, is on display at the state Capitol Museum and at Phoenix’s Burton Barr Library.