Q&AZ: Why Do Only Certain Metro Phoenix Freeways Have Billboards?

A drive on the Loop 101 paints a perfect picture of the differences you’ll see along freeways and highways in the metro Phoenix area.

On the eastern and northern stretches of the loop, there’s hardly a billboard to be found. Then there’s the West Valley, south of Bell Road, where your eyes are inundated by digital billboards dotting either side of the freeway.

Through KJZZ’s Q&AZ project, a listener asked why that’s the case.

The discrepancy has nothing to do with the freeway itself. What matters is the city you’re driving through, according to Andrew Chi, a planner with Scottsdale.

“Each city has their own regulations, set of regulations for signage, and if they believe that advertising assists with the city’s goals and policies, you know, I wouldn’t want to speak ill of any city. It’s their decision,” Chi said.

As for Scottsdale’s portion of the Loop 101, there are no billboards to be found. That’s because the city outlawed billboards in 1970, except for any built before the rule took effect.

“Billboards are completely banned in our city,” Chi said. “There is only one billboard left, and that is located on McDowell Road and Miller [Road] in the southern part of the city, and that is built like a rock.”

The decision an aesthetic choice for Scottsdale, which prides itself on uncluttered streets, Chi said. Other cities weighed their own interests when writing zoning codes and ordinances that accounted for new roads and digital signage. 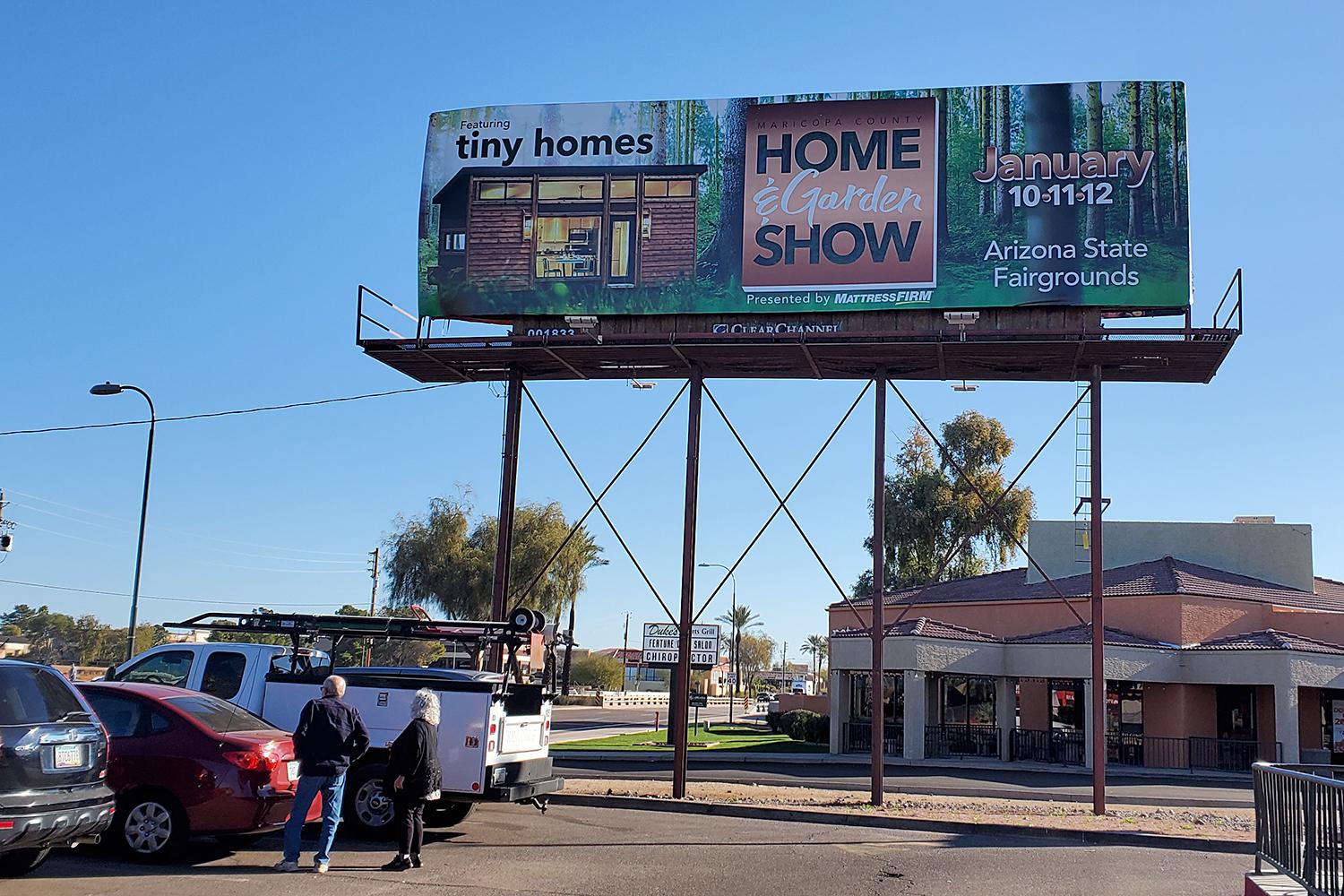 Tricia Gomes, zoning administrator for the city of Phoenix, said the council adopted new rules for billboards in 2011.

“In any text amendment that is done throughout the city, it is a balance between community interests and corporate interests,” she said. “So it was kind of trying to strike that balance, so allow additional areas for board, improve or enhance the technology, but then lets reduce the structures throughout the city as a tradeoff.”

Per that amendment, Phoenix allows billboards along some highways, but not all. Gomes said the northern loop of the 101 and State Route 51 are both considered scenic corridors.

There is an exception up north — a digital billboard built on an RV storage lot adjacent to the Loop 101 in Phoenix — that highlights the intricacies of zoning laws in each city, according to Brad Terry, real estate and operations manager at Lamar Advertising in Phoenix.

“They’re the only ones standing up there, and that is arguably one of the most lucrative boards in town, because they are the only one out there on a good demographic on a very busy stretch of freeway,” Terry said.

That lone billboard is a stark contrast to the western stretch of the Loop 101, spanning parts of Peoria, Glendale and Phoenix.

“There’s no less than I think at last count 26 to 28 digital faces between I-10 up to about Glendale Avenue,” Terry said. “And it’s a remarkable amount of inventory up there, which nobody really wants because it gets to a supply and demand issue. It’s one of our, unfortunately it’s one of our least lucrative areas of town, and that has to do with the inventory amount.”

Other parts of the Valley, like Scottsdale, are more strict. Terry said billboards that appear to be located in Mesa and Gilbert are actually located on county islands — unincorporated parts of Maricopa County.

Tempe doesn’t allow billboards, with one caveat: An advertising company can agree to build new billboards along the freeway, but only if they take down billboards elsewhere in the city.

The agreement reflects the city’s desire to remove large advertisements from arterial roads, which were long the focus of advertisers before the Valley’s freeways were built out.

“I’m gonna tell you that in metropolitan Phoenix there’s considerably more on streets, on arterial roadways throughout the city, and that has to do with the way this area was developed going 30, 40, 50 years back, where zoning allowed for this on different lighter commercial use properties,” Terry said.

That means there’s not a lot of room for new billboards in the Valley, save for one new stretch of road: the South Mountain Freeway. Terry said advertising companies have their eye on a particular stretch of that freeway, and want Phoenix to amend city code, which bans billboards on any new freeways like the newest portion of the 202.

Ben Giles/KJZZ
A billboard along Interstate 10 in Phoenix.