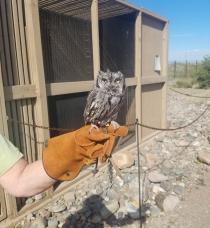 Annika Cline/KJZZ
Stella the owl perches on the glove of a handler at Liberty Wildlife in early 2019.

Rescue and rehabilitation service Liberty Wildlife has posted another record year, reaching more than 9,800 intakes despite hopes that the weaker monsoon would mean fewer birds blown out of their nests.

"The same thing happens when we have those really hot days — when we hit the 115s, you know, 112 and above for multiple days in a row. We see a lot of the animals, they're bailing out of the nest because they're getting very hot," she said.

Miller added most injuries arise from effects of human encroachment on animal habitats.

"They get hit by cars, they hit windows, they're gunshot, which is not a natural cause for them. And so therefore we feel the need to be able to help that animal out and give it a second chance and be able to return it out into the wild," she said.