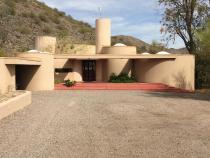 Frank Lloyd Wright is arguably the most famous architect in American history. His legend lives on in the Phoenix area with the Arcadia home he designed for his son, as well as what began as his winter lodgings, Taliesin West.

But Wright’s long life was also full of tragedies and resets — including loved ones being killed and houses burning down.

Best-selling author Paul Hendrickson examines Wright’s history and tries to dig deeply enough to learn more about his humanity and some of what may — or may not — have been tall tales.

The book is called "Plagued by Fire: The Dreams and Furies of Frank Lloyd Wright."