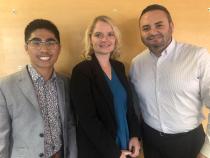 Since 2010, the country saw an increase of just about one year, but Arizona’s average age increased by two years in that same period. That may not sound all that significant, but it was second only to the increase seen in Maine, the oldest state in the country.

And the reason why may not be entirely surprising: older Americans are moving to the state while young people move out.

According to the Center for the Future for Arizona, 81% of graduates from Arizona’s three public universities will stay. But 10 years later, just 55% are still here.

That means young people are leaving as they enter their golden years in the workforce. So how do we change their minds?

The Center for the Future of Arizona is trying to do just that. It recently formed a group of young talent advisers, young professionals who have decided to stay and who are making the argument that others should, too.

The Show was joined for its next Points of View roundtable by Kristina Crane with STC Health, Luke Amargo with Better Business Bureau and Vitalyst Health Foundation’s David Martinez. They’re all members of this advisory group.