L'Academie Baking And Cooking School: Made In Arizona 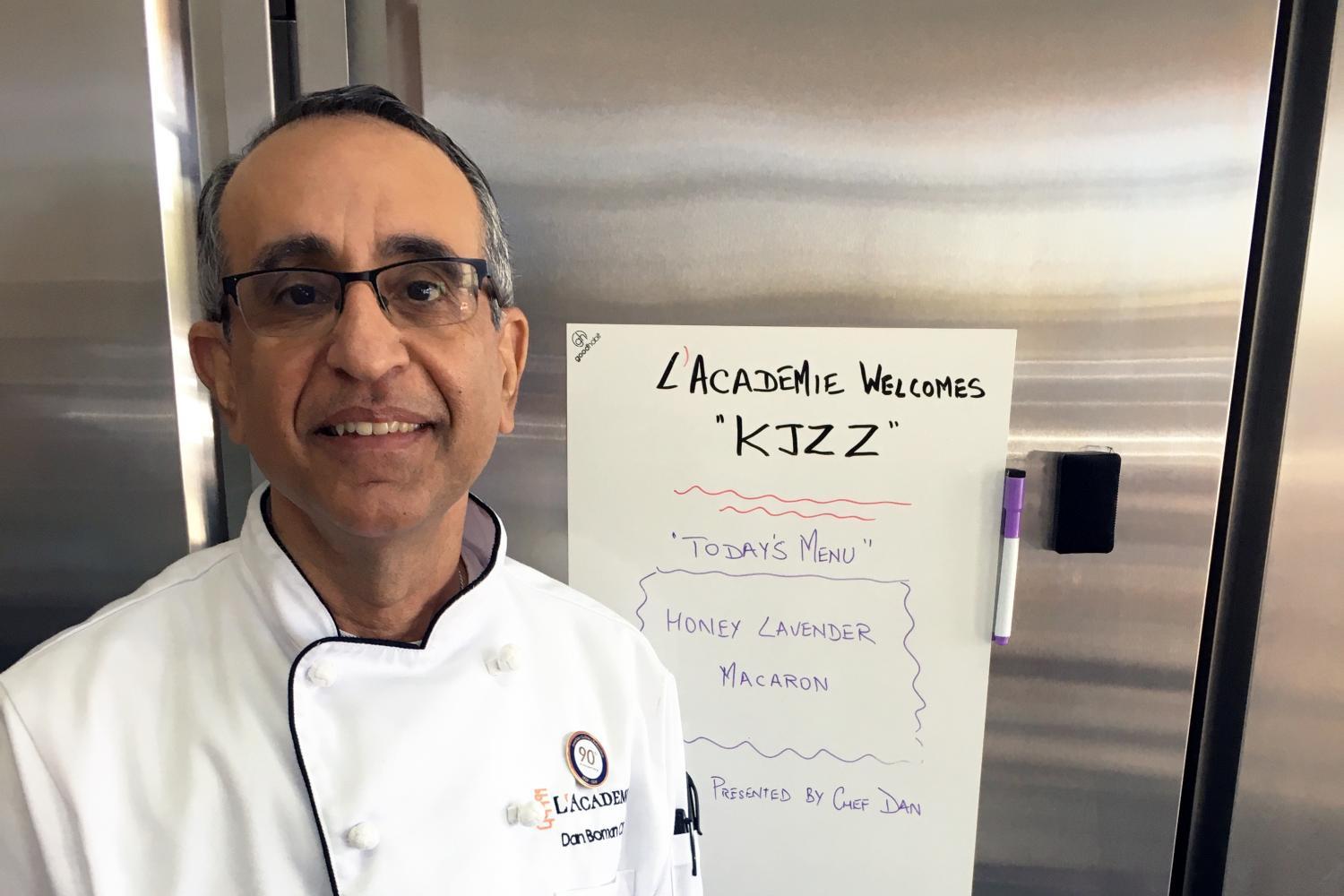 STEVE GOLDSTEIN: And now let's turn to our new series Made In Arizona, where we showcase local makers, restaurateurs to fashion designers. Dan Boman has been a chef for a couple of decades and has been teaching at Scottsdale Community College and Le Cordon Bleu. Settling with his family in Gilbert and using his years of experience, he recently opened the L'Academie Baking and Cooking School. When I walked in, I immediately noticed the colors were light and bright with clean lines and their were images on the walls. A closer look revealed photographs of some of Boman's award-winning creations — desserts in a comfortable disguise of artistic design. Boman's affection for baking started early, at least according to family lore.

DAN BOMAN: The story goes that a long time ago my dad took me to a pastry shop that was a very high-end pastry shop. I grew up in India, and this was in Mumbai, and I was absolutely amazed at some of the stuff I saw. I saw some show pieces, I saw some really high-end pastry. And I've always been an artistic person from the get-go. And I always felt that that would be a way for me to express my creativity. And I've done that in my career ever since then. And I don't regret one minute taking up pastry and baking.

GOLDSTEIN: So how does the art manifest itself? As far as the actual creator of it, what are you aiming for? What's the balance point there?

BOMAN: Well, I'm aiming for the wow factor. You know, when somebody comes and takes a look at your...whether it just be a piece of, a simple piece of pastry, or a plated dessert, or even a high-end showpiece, there is that wow factor that people look at when they look at your food. And when I see that in their faces and that expression on their faces, not only should it look good, but it should also taste good. And we try to get a fine balance between the two and try to do the best we can.

GOLDSTEIN: When you're teaching students, what is it like to have the expertise you have? And you have a huge variety of folks. You have people who I presume know some things, who want to think they know things and people who are just beginners. What's that like for you?

BOMAN: I love the fact that, you know, we can cater right here. We can cater to a varied, very diverse audience. We cater to the aspiring enthusiast as well as the industry professional. And we even have kids as young as 5 and 6 years old that really want to take this on as a career. We had a couple of folks that came by with their 6-year-old the other day and they wanted her...and she wants to be a chef. And they wanted me to take...come, come here. She...they wanted me to send her here and take a class with me and see what it's like and get a feel for it and to be able to work with a real pastry chef. And so I felt very honored and humbled that she...that they made the trip here and to come and see us.

GOLDSTEIN: How did you come by the recipes you use? How did you decide these are the best recipes?

BOMAN: Well, these are time-tested recipes that I've been using over years. I've accumulated them from various sources, mostly chefs that I've worked with that have been kind and willing to be able to give me their recipes. Of course, I've tweaked them quite a lot over the years to my liking and to  the liking of the general people, the general clients that we have in here. And we...these recipes absolutely work. Not only do they work here, but they also work in the home environment.

GOLDSTEIN: So, Dan, what are you going to make for us today?

BOMAN: We are gonna do some French macaron, not to be confused with the macaroon.

GOLDSTEIN: That is an important distinction. You have to explain the difference for us.

BOMAN: Well, the difference between the two is a French macaron is literally a, it's a gluten-free product and it's made with powdered sugar, egg whites and some flavoring, basically an almond flour. We use almond flour in here, we use blanched almond flour, which produces the best product. And what we're making today is a honey lavender macaron.

GOLDSTEIN: Let's get to work then.

BOMAN: Let's do it. So what we have on the tray is, we have our almond flour and powdered sugar. The ingredients for the French macarons. We also have fresh egg whites. We always use fresh egg whites at room temperature. We have some dried lavender seeds, some regular sugar and some additional powdered sugar. So we're gonna, go ahead and we're going to start making a meringue pretty soon. So what I first need to do is I need to make sure I mix my almond flour and my powdered sugar together, making sure that it's completely combined. So I'm going to put them in together in a food processor, which is really the most ideal and efficient way to get these two items together. I'm gonna start adding in my sugar. I also want to preheat my oven and the oven gets heated to about 300 degrees Fahrenheit. It needs to be bright white and it needs to be shiny. Once you have a meringue that's nice and shiny, you know you're on the right track.

GOLDSTEIN: There is a science to it, there, Dan, which is interesting. People don't always think about that. That when you think about the chemistry of putting these different things together, the measurements are really vital.

BOMAN: Absolutely. You know, as they say, baking is a science and it's an exact science. And even when we're making bread, we make sure that all our recipes are read not in grams rather than ounces, because a difference of a few grams here and a few grams there can make a big difference in your product, especially when you're dealing with items like yeast and sugar that feeds the yeast. It's really, really important that everything is absolutely accurate and precise. So what we have here, as you can see, Steve, is that we have almost a stiff peak. And so that's what we're looking for in a meringue. And as soon as I have that, I'm going to start adding in some of my color. And I have decided to, since it's a honey lavender, that we're going to go with the violet color.

GOLDSTEIN: The aroma is incredible.

BOMAN: Thank you, Steve. And that's what, that's one of the first things that people sense is a sense of smell. And that's why a bakery smells so good and entice people to walk in.

GOLDSTEIN: Okay, Dan. So you've taken the final product out of the freezer and now what are we gonna do?

GOLDSTEIN: And that is award-winning pastry chef Dan Boman of the L'Academie Baking and Cooking School in Gilbert, helping me learn how to make macarons. And you can see how they turned out pretty nicely by going to theshow.kjzz.org. 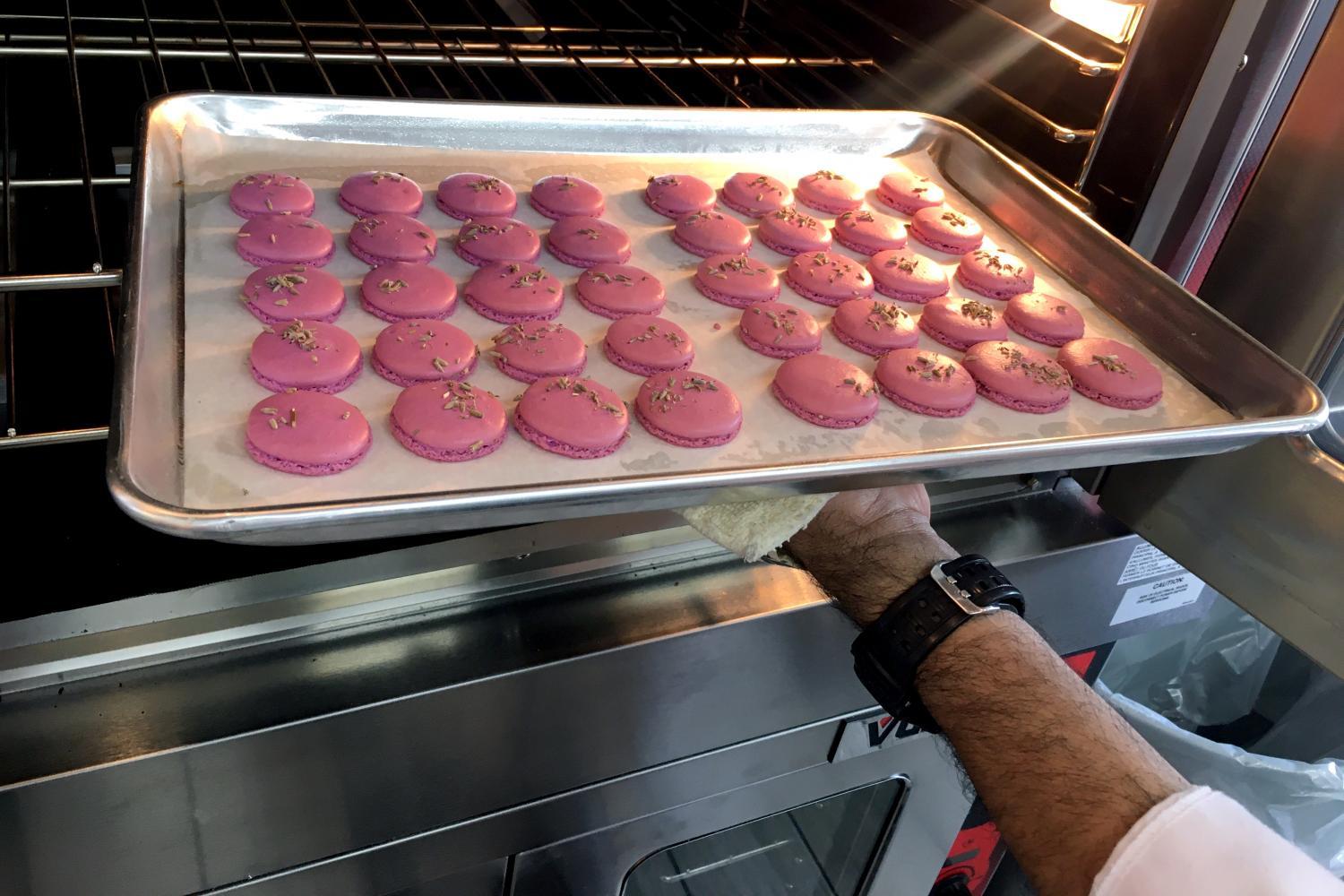