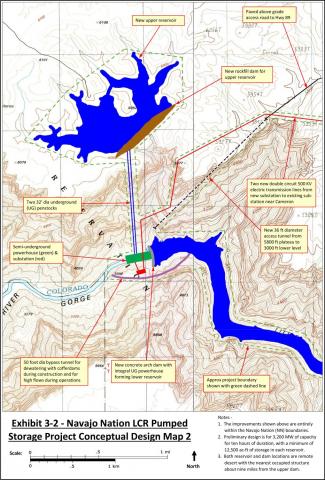 Native American tribes and conservation groups are speaking out against a pair of dam projects proposed near the Grand Canyon.

Phoenix-based Pumped Hydro Storage LLC is asking the Federal Energy Regulatory Commission for preliminary permits to study two dam projects along the Little Colorado River on the Navajo Reservation. Representatives from the company were not available for comment, but in its application, the company said the dams would create jobs, add paved roads, and bring electricity and clean water to remote parts of the Navajo Nation.

But opponents say the projects would threaten indigenous cultural sites, harm an endangered species of fish, and restrict sediment flows that are critical to river ecosystems.

“It’s as if they looked at a map of Arizona and said ‘where would be one of the worst places to put a project like this?’ and they found it on the Little Colorado River,” said Sandy Bahr with the Sierra Club's Grand Canyon Chapter.

The Sierra Club is one of several environmental groups that recently filed a motion to intervene on the projects. The Navajo Nation, Havasupai Tribal Council, Arizona Department of Game and Fish, and outdoor recreation groups have also filed motions to intervene.

EDITOR'S NOTE: The story has been updated to better reflect when the Sierra Club filed a motion to intervene.