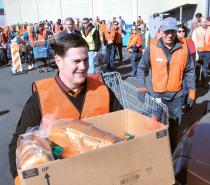 The Arizona Food Bank Network on Tuesday rolled out a new program called “Friends of the Farm.”

The pilot program will receive $250,000 from the state for its operations.

According to a press release, the initiative is designed to get more fresh produce, dairy and protein from Arizona farms into food banks throughout the state.

Angie Rodgers — president and CEO of the Arizona Food Bank Network, which will manage the funds — said, “Our attempt is going to be to match as much as we can with small growers in rural communities, in urban communities with a local food bank that can be able to accept that donation or accept that purchased product in a quick way.”

Rodgers said about 80 percent of the food that goes to the large regional food banks in the state comes from a mixture of individual donations, retail grocers and the federal government. The remaining 20 percent is balanced by agriculture donations and purchases.

Speaking at a St. Mary’s Food Bank on Tuesday, Gov. Doug Ducey said he’s “thrilled Arizona is one of the top states in terms of growth and paychecks but that doesn’t mean something to someone who doesn’t have a job or is looking to get back on their feet.”

Formerly called the Association of Arizona Food Banks, the Arizona Food Bank Network is a "private, non-profit organization serving five regional food bank members and a network of nearly 1,200 food pantries and agencies," according to its website.