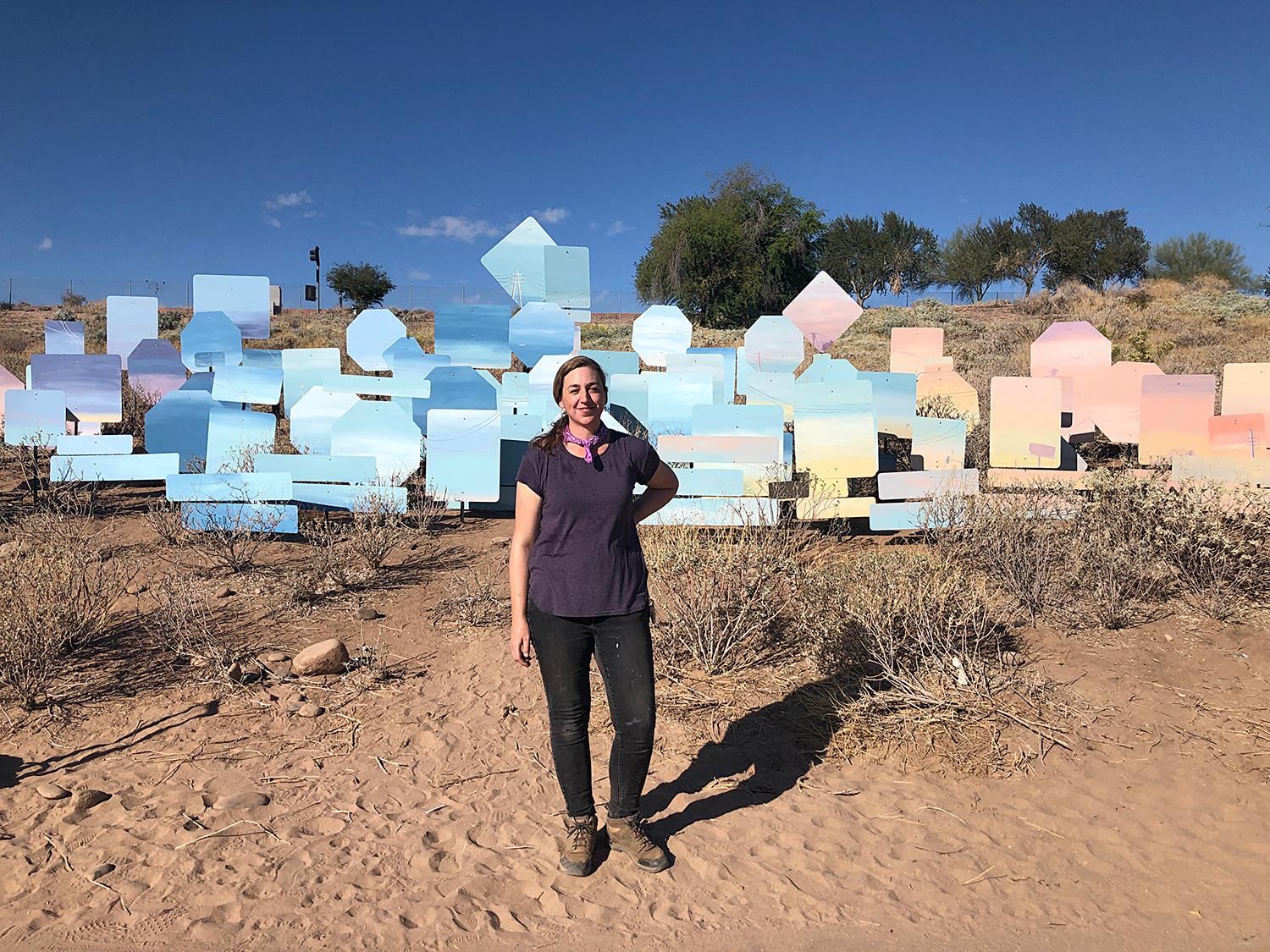 LAUREN GILGER: And now let's turn to our new series Made in Arizona, where we showcase local makers from bakers to fashion designers. But before we get to today's maker, a little news in this realm. This year, the Roosevelt Row CDC was awarded a $40,000 grant from Etsy after being named one of five 2019 Maker Cities. Greg Esser, artist and founder of the Roosevelt Row CDC, told us the money will be well spent.

GREG ESSER: It will support our Roosevelt Row Academy, which is a teaching program developed by several of our artists board members.

GILGER: The grant will support the program for about a year, and Esther says this will help participants gain a new set of skills.

ESSER: This will be focused on helping to build presentation, marketing, business skills, legal skills. We'll be addressing issues like artist licensing, copyright protections, how to show your work — both in retail environments and online platforms. Artists that are interested in getting into First Fridays and selling their work through that venue will all have an opportunity to learn and grow as independent businesses.

GILGER: Anyone can apply to be a part of the Roosevelt Row Academy to take this training, and it's an important distinction for Roosevelt Row, according to Esser.

ESSER: Because there's been a lot of discussion about the displacement of artists from our community, and we believe that artists should be part of the benefits of economic growth of our area and should benefit equally from their work and effort in building this area. 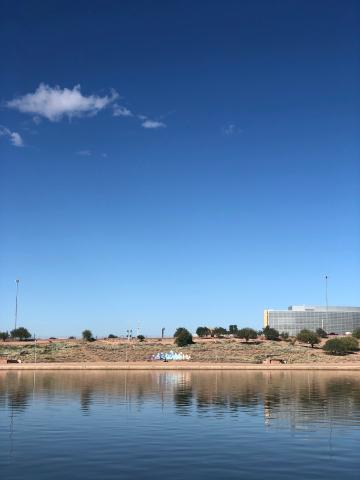 GILGER: OK, so now let's turn to our next maker, this time one who is known for using sometimes unexpected objects to create art. Walk alongside Tempe Town Lake right now, and you'll see what looks like a mirage in the distance.

LAURA SPALDING BEST: What I've depicted is the desert sky landscape and so you'll see little bits of the landscape that protrude and jut up into the sky.

GILGER: It's sitting on the far side of the lake on a hillside that's otherwise dotted with desert scrub.

BEST: The color fields range from light pink to peaches and yellows and sky blues — like that sort of unforgiving, clear blue sky of a hot desert day — and all the way down to the purples of sunset. And so the color pattern goes from east to west, just like a sunrise to sunset. And it really depicts the sky of an entire cycle of a day.

GILGER: Artist Laura Spalding Best has been out here every day with a cooler and a hat painting somewhere north of 120 old Tempe street signs to create the mural.

BEST: So I've planted all these posts that support the street signs, and I've painted on the metal side. So if you climb the hillside, you'll see the reverse view of the mural. It's all stop signs, no left turns. You'll see it kind of, you know, as the original objects that they are.

GILGER: On the painted side, you'll see the kinds of landscapes this uniquely Arizona artist likes to depict.

BEST: All of the bits of the landscape that I've depicted here, the utility poles, telephone lines, everything that runs through the mural is all imagery that's found probably within a half mile radius of right here. If you look at the center, it's a it's a merge sign. Diamond shape of the top. That massive pylon is right over there.

GILGER: It's the kind of stuff we like to look past, the ugly, quite literally utilitarian things that litter the Valley skyline and the things that best thinks are worth a second glance. This project, commissioned by the city of Tempe for the 20th anniversary of Tempe Town Lake, is typical of her work. Best is known for painting on found objects, whether it's these street signs or old spoons or tin trays. She's also known for the way her work celebrates her home of the last 20 years.

BEST: I moved here in 1999 to pursue my BFA in painting at ASU, and I had always wanted to be an artist. Probably since I was 9 or 10 is when I'm really realized that I could draw from life and draw well and observe. And that was always going to be my path from there.

GILGER: From 9 or 10. Do you remember like the first thing that you drew an understanding that you got it and knew how to do it in a way that maybe other people didn't?

BEST: My mom used to run a daycare out of our home. So there's like just a few baby boys. They're all infants. And I would sit while they were sleeping and draw their faces. And it just became a way of practicing and doing it more and more. And then, you know, when their parents bought one, it felt like, "This is real. This is something that is important to other people. And maybe I'm better at it than I realize."

GILGER: So you sold your first painting there and at what age? 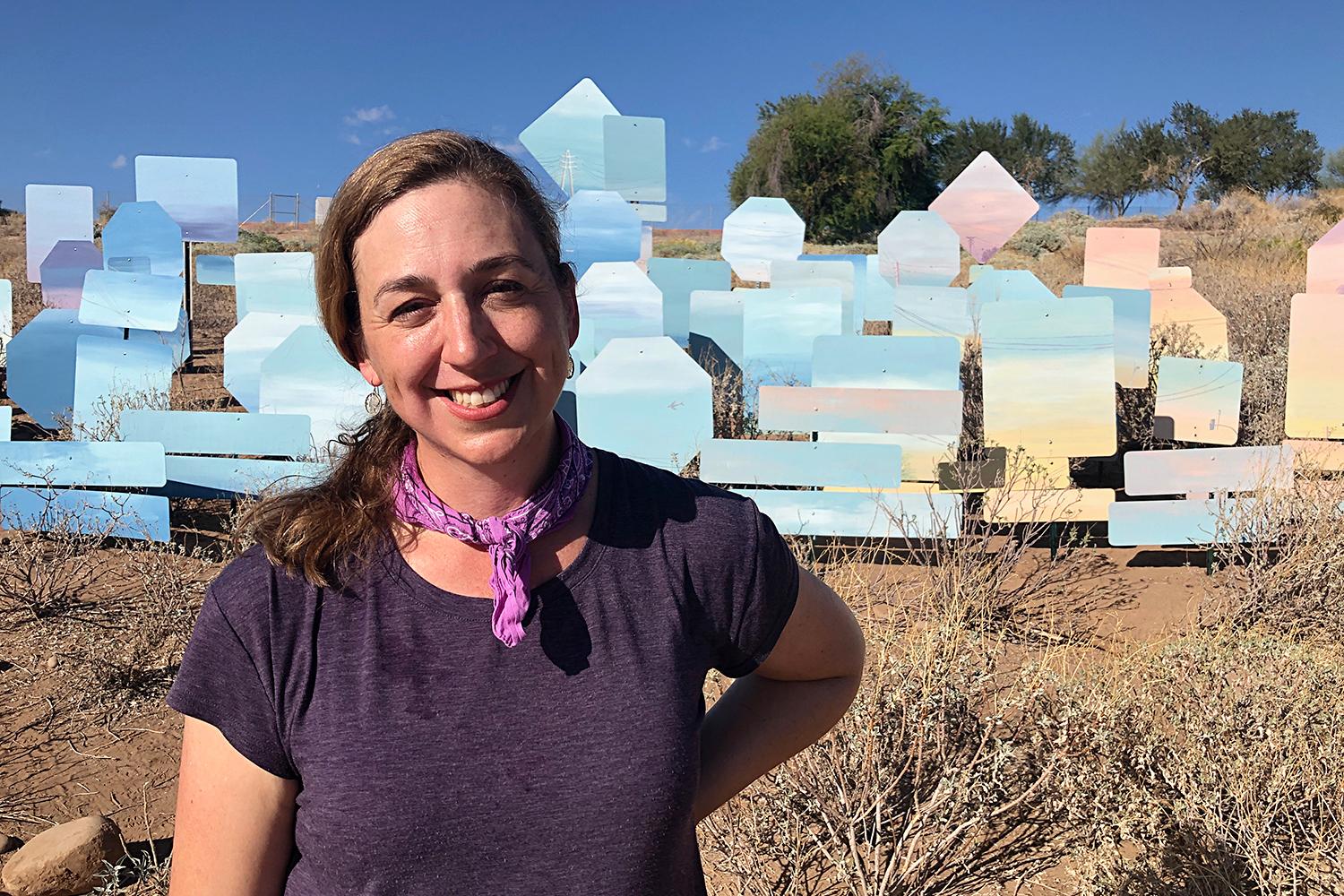 GILGER: Ten years old! OK, so you were definitely bound for this from a young age. Give us a sense of the growth of that. You have a very particular style and a very Arizona point of view, if you ask me it, looking at your work. So how did it become something that, you know, you're working with the city of Tempe on a 20th anniversary project here at Tempe Town Lake?

BEST: Well, this is great because this proposal came out of my artist residency that I did with Tempe Center for the Arts Gallery over the summer. So I got to be there in the beautiful gallery space painting and talking to the public. And I was in the exhibition, which was about water. The exhibition was solely focused on water. And my work deals with the landscape, specifically the urban landscape of Arizona, of the Valley. And I look at how we use resources, utility, anything that helps us live and thrive in an unforgiving desert environment. And so those are the parts that I pull up and really emphasize in my landscapes. And in this case, you know that the subject matter relates so perfectly to this place, because of where we are at at Tempe Town Lake. And, you know, what it used to be and what it is now.

GILGER: Right, right. So when I think about your work, I think about power lines, right? Like utility lines, like you say. So what is it about sort of capturing that mundane, that literally utilitarian stuff that you think is beautiful in a way?

BEST: Well, I think there's a lot of power in shared visual experience. And so that mundane daily kind of view that we all share. We see it on a commute, when we're out at the park. I mean, you see these things everywhere. They're not hidden from view, but there's something about them that you don't notice because we're seeing right past them. We're want to see, you know, the pretty flowers next to the telephone pole, right? And so I really like to pull them out. And it's just something that starts you thinking about them and noticing them and realizing that part of our environment, we don't have to deny that it's there. You know, that we can embrace it for better or worse and figure out how it fits into the rest of our idea of our place and our environment and our perspective from that place.

GILGER: When did this become your style? Like, was there a moment in your art painting training that you first did a piece that looked at something like this and you thought, oh, this is something I really want to keep going with?

BEST: Yeah, it's pretty early on after I finished school, and I had a studio off of Grand Avenue in downtown Phoenix. And it was like the urban environment was just seeping in. I was like noticing and seeing all of these things. I was drawing the house next door to my studio and looking at things in my own neighborhood. And it came about really naturally because I turned from very figurative work of portraying people and life sized portraits into painting the landscape. And as I did that, I thought, "Oh, I don't want to paint a typical, you know, really pleasant southwestern landscape with so arrows and purple shadows and blazing sunsets, and so what is it to me? What do I really see?" And then I figured out that what I really saw, which I thought was sort of boring and mundane was really quite spectacular. And it was just about framing it in the right way.

GILGER: So as this has spread and sort of caught on in a real way — and you're getting the kind of attention that most artists want — what do you think your work says about this place, and do you hope that you're helping to shape that narrative as they are so specific to here?

BEST: You know, when I'm when I'm making work, and I'm thinking about the people that are looking at it, I leave that ambiguity there so that I can have something open to interpretation because people will put their own perspective on it no matter what. It doesn't matter my intent. In the end, I'm sharing what I can share. But I think that it's important. I think what people derive from it is a sense of identity and place, that they they find a way that it fits into their view — their local view, their world view. Sometimes it might be a little disturbing. Sometimes it might be comforting. But I think it's really important to be constantly aware and conscientious of of where we are and what's surrounding us. And it really all just comes back to that idea that you are in this environment and you need to acknowledge that and explore that and think about that. And so what I hope is that it's not just taken for granted that this is something that, if you're looking at my work, it might help you think about your own place.

GILGER: Laura Spalding Best, thank you so much for having me out.

BEST: Thank you for having me.