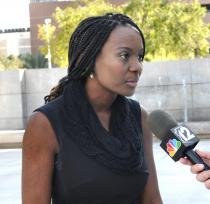 Howard Fischer/Capitol Media Services
Talonya Adams talks about the federal court ruling that says she is entitled to be rehired by the Arizona Senate on Oct. 18, 2019.

After a jury ruled that a former state Senate staffer was fired and discriminated against based on race and sex, Senate leaders want a new trial.

The motion for another round of litigation, filed in U.S. District Court on Wednesday, comes after attorneys for the Senate failed to meet a deadline to rehire former staffer Talonya Adams and pay her more than $350,000 in damages and back pay.

Judge Douglas Rayes ordered the Senate to bring Adams back into the fold by Oct. 31. That deadline has come and gone, with the parties at an impasse over the terms order by Rayes.

The judge scheduled a hearing Friday to address the stalemate.

But now attorneys for the Senate say the jury’s finding was made “contrary to the clear weight of the evidence presented at trial,” according to the motion.

Adams was hired at the Senate in 2012 as a policy adviser for Democrats, essentially a staffer who helps lawmakers craft and understand legislation.

In her lawsuit, she said she learned in 2015 that male, non-African American counterparts "received substantially higher salaries and salary increases.''

Adams said while the job responsibilities were supposedly the same, she had a "heavier workload and the more challenging committee assignments.'' She also said she was the only policy adviser who did not get a raise while she worked for the Senate.

Adams was fired during a trip to Seattle, which she took to visit her hospitalized son. She was told she would have to use annual leave while away. Adams said she kept in contact with the Senate and even did some duties while in Seattle, only to be told she had been fired for insubordination and abandoning her job.

Jurors agreed with her claim that she was paid less, was discriminated against with respect to the amount of leave she was allowed to take, and was terminated for complaining about discrimination.

Officials with the state Senate declined to comment on their request for a new trial. Adams could not be reached for comment.