Download mp3 (1.27 MB)
Craig Knoblauch.
Phoenix team pictured with the "flatsat" hardware in their laboratory. This setup allowed for easier prototyping of the satellite's software and interfaces before assembling the flight hardware.

The Phoenix CubeSat is one of seven nanosatellites selected through NASA's CubeSat Launch Initiative, which supports projects designed, built and operated by students, teachers and faculty, as well as NASA centers and nonprofit organizations. 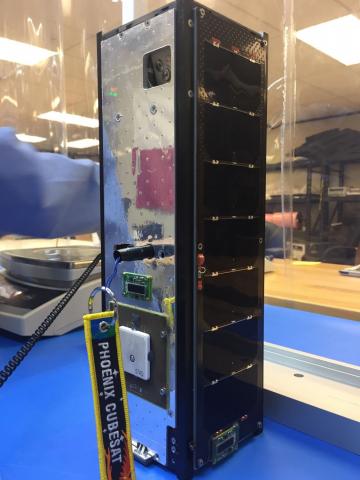 Sarah Rogers
The fully assembled 3U CubeSat, about the size of a loaf of bread. The image shows one of the spacecraft's two body-mounted solar panels on the right. The GPS antenna is pictured on the front, along with the CubeSat's "Remove Before Flight" (RBF) pin.

CubeSats meet a standard size profile of 10 centimeters (around 4 inches) per side. This modular design means they stack easily, occupy only limited space and can deploy from standardized chutes aboard spacecraft.

An interdisciplinary group of around 100 ASU undergraduates took part in the effort, which will use an off-the-shelf thermal infrared camera to study changes in the heat properties of cities across the U.S. over time.

The term "urban heat island" describes an urban area that experiences warmer conditions than its surroundings due to human activities, the thermal properties of building materials and other related factors.

The team chose to focus on Phoenix, Los Angeles, Houston, Chicago, Atlanta, Baltimore and Minneapolis due to their large populations and range of climate characteristics.

"Everyone who's come out of this project, I've just seen grow so much as engineers and as individuals, and that's just been really incredible," she said.

A Northrop Grumman Antares rocket launched from NASA's Wallops Flight Facility in Virginia on Nov. 2 and delivered the CubeSat to the International Space Station. The station will deploy it to orbit in January.

From there, Phoenix could operate for up to two years before its orbit decays and it burns up in the Earth's atmosphere — enough time to provide data through all four seasons for at least a year.

"We'd love to give that information to urban planners in order to essentially help make our cities a lot more sustainable for future generations," Rogers said.

The team will make Phoenix's observations publicly available on its website phxcubesat.asu.edu/.