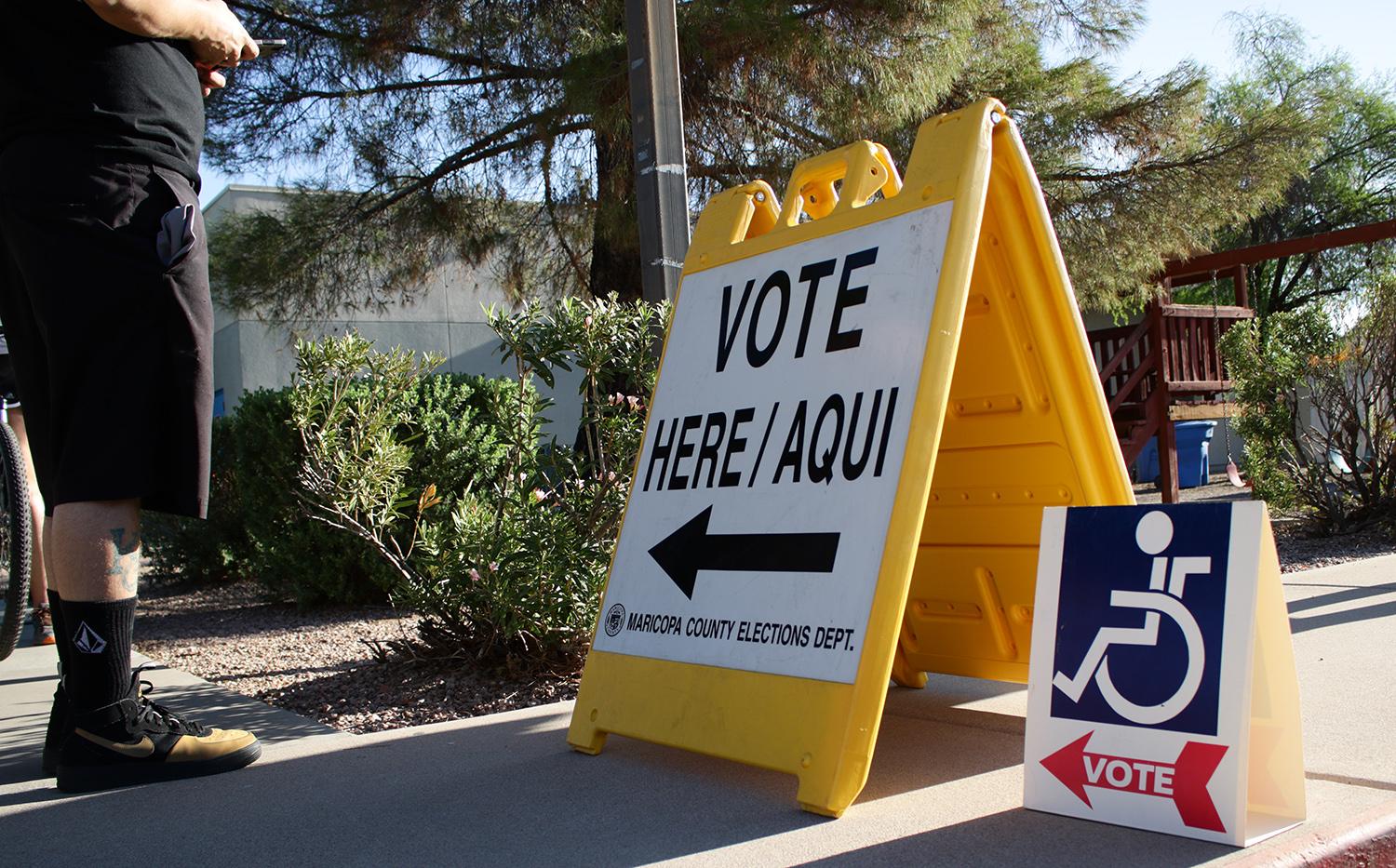 Jackie Hai/KJZZ
A sign outside a Phoenix-area polling location in 2018.

A sweeping ballot measure unveiled Wednesday would legalize automatic and same-day voter registration in Arizona, while also restricting the dollar amounts individuals and political committees can contribute to candidates.

If approved by voters, the Fair Elections Act would also restrict lobbyists’ ability to wine and dine lawmakers – another nod to the overall goal of favoring “everyday Arizonans,” according to Joel Edman, executive director of the Arizona Advocacy Network.

“Too many Arizonans across the state of all points on the political spectrum feel like ... our political process is too dominated by a small group of wealthy interests and doesn’t pay enough attention to the needs of everyday Arizonans,” Edman said.

When it comes to voting, that means giving Arizonans a choice to opt out of automatic voter registration when they’re applying for or renewing their driver’s license.

State law now requires residents to opt in to register to vote while at a Motor Vehicle Division office.

Arizona residents would also be allowed to register to vote and cast a ballot on the same day.

The initiative eliminates a state law requiring voters to register at least 29 days prior to an election.

And ballots returned by mail would count as long as they’re postmarked by 7 p.m. on Election Day, meaning election officials would have to wait to count those votes for up to 10 days after an election. Edman acknowledged that would delay election results, but said it’s more important that voters be afforded ample time to vote by mail.

Concessions are also made for Native American voters by requiring county election officials to host voting centers on tribal lands.

The initiative also would undo recent increases in campaign contribution limits and put in place a more robust public financing system to encourage candidates to run for office without accepting private  contributions.

While traditionally financed campaigns take a hit, candidates who choose to fund their campaigns through the Citizen Clean Elections Commission, which offers public financing for candidates who swear off private contributions, would get a boost.

Public funds available to legislative candidates would nearly double – for example, primary election funding would jump from roughly $13,000 to roughly $23,000.

Publicly financed candidates for governor, who’ve routinely been outspent by their privately financed counterparts, would receive more than double their current funding options: $1.8 million for the primary election and nearly $2.7 million for the general election.

Every registered voter in Arizona would also receive certificates — worth no less than $50 and no more than $150 — they could provide to publicly financed candidates of their choosing. Those certificates would allow Clean Elections candidates to raise far more than the standard amount of public financing they’re afforded.

Certificates would be funded in part through a higher cap on the corporate minimum income tax.

Edman said the changes are meant to reinvigorate a public campaign finance system that’s been assailed by the Republican-controlled Legislature, and once more make it a viable option for candidates.

Once elected, public officials would no longer be allowed to be swayed by way of fancy dinners and free travel arrangements.

The ballot initiative tightens restrictions on what constitutes a gift to an elected official. Exemptions for travel and lodging, as well as payment for speaking engagements, are eliminated from the law. An exemption for food and beverages would be limited to no more than $20, and would require lobbyists to itemize the expenses on their lobbying reports.

Former lawmakers would also be barred from lobbying for two years after they leave the Arizona Senate or House of Representatives, rather than the current year-long ban.

The initiative’s supporters will need to collect nearly 238,000 signatures by July 2 to qualify for the ballot in November 2020.