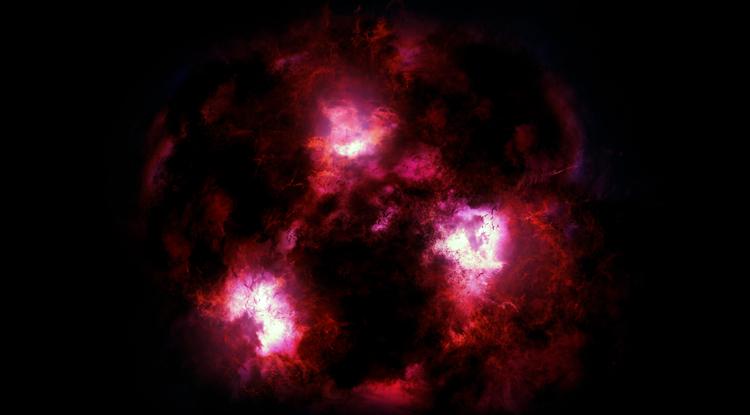 James Josephides/Christina Williams/Ivo Labbe.
Artist’s impression of a massive galaxy in the early universe, where an explosion of star formation lights up the surrounding gas. Thick clouds of dust obscure the light, causing the galaxy to look dim and disorganized.

Discoveries of massive, mature galaxies near the dawn of the universe have left astronomers wondering: Where are the young, rapidly developing galaxies that ought to precede them? A new study might provide some answers.

The research appears in "The Astrophysical Journal."

Before galaxies grow old, they go through one or more periods of prolific star-spawning that are fueled by an abundance of gas and produce dust as a byproduct.

That dust – and its ability to block starlight – might explain why some early galaxies have eluded detection.

Lead author Christina Williams, a University of Arizona postdoctoral fellow, found one such galaxy by detecting the heat released by the dust itself.

"So, what the discovery of this galaxy means is that they're probably out there, and we just can't see them because they're hidden by too much dust," she said.

The signal came from 12.5 billion light years away, meaning the galaxy existed in its observed form during the early universe.

Massive, dusty, star-forming galaxies are comparatively rare, though hardly unheard-of. But astronomers can usually detect them at other wavelengths.

If more galaxies like the one Williams observed lurk in the past, it would mean an undercount for scientists' current galactic census. That could have deep implications for understanding how the universe formed, and for estimating the total energy of the cosmos.

"This galaxy is something that would be absent from all of our other surveys, but it's from a very small survey that we conducted. That means that it's probably very common in the early universe," Williams said.

The detection was made possible by the greater sensitivity and resolution of the Atacama Large Millimeter Array in Chile. The James Webb Space Telescope, slated for launch in March 2021, should enable a more detailed study.