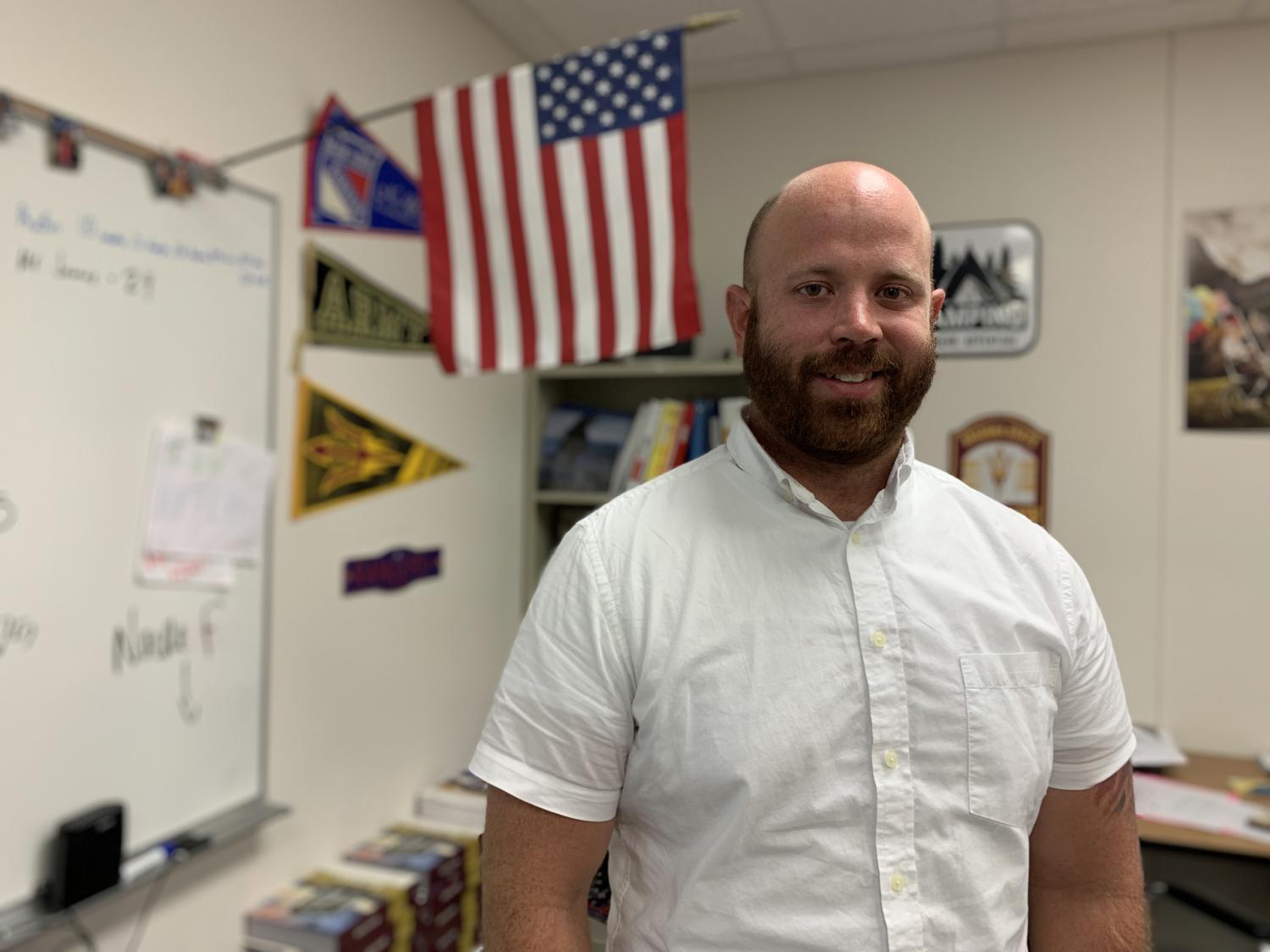 Christopher James deployed to Iraq with the army as part of a 2007 troop surge meant to clear terrorism from the region.

“We only had three or four uniforms so we had to make sure they would last,” James said.

What he didn’t know was that an explosion would rip through his military vehicle that day.

"This rocket came through so quickly that it burned part of my flesh on the right side of my face,” James said.

Blood obscured the six pieces of shrapnel lodged in his left leg. When someone tried to help all he could think about was preserving his uniform.

On a recent Monday in September, James held up the shredded, stained fatigues in front of his class at Casteel High School in Queen Creek. The students passed around his Purple Heart.

Since leaving the Army as a specialist in 2009, James earned a bachelor’s and master’s degree from Arizona State University and has been teaching for seven years. 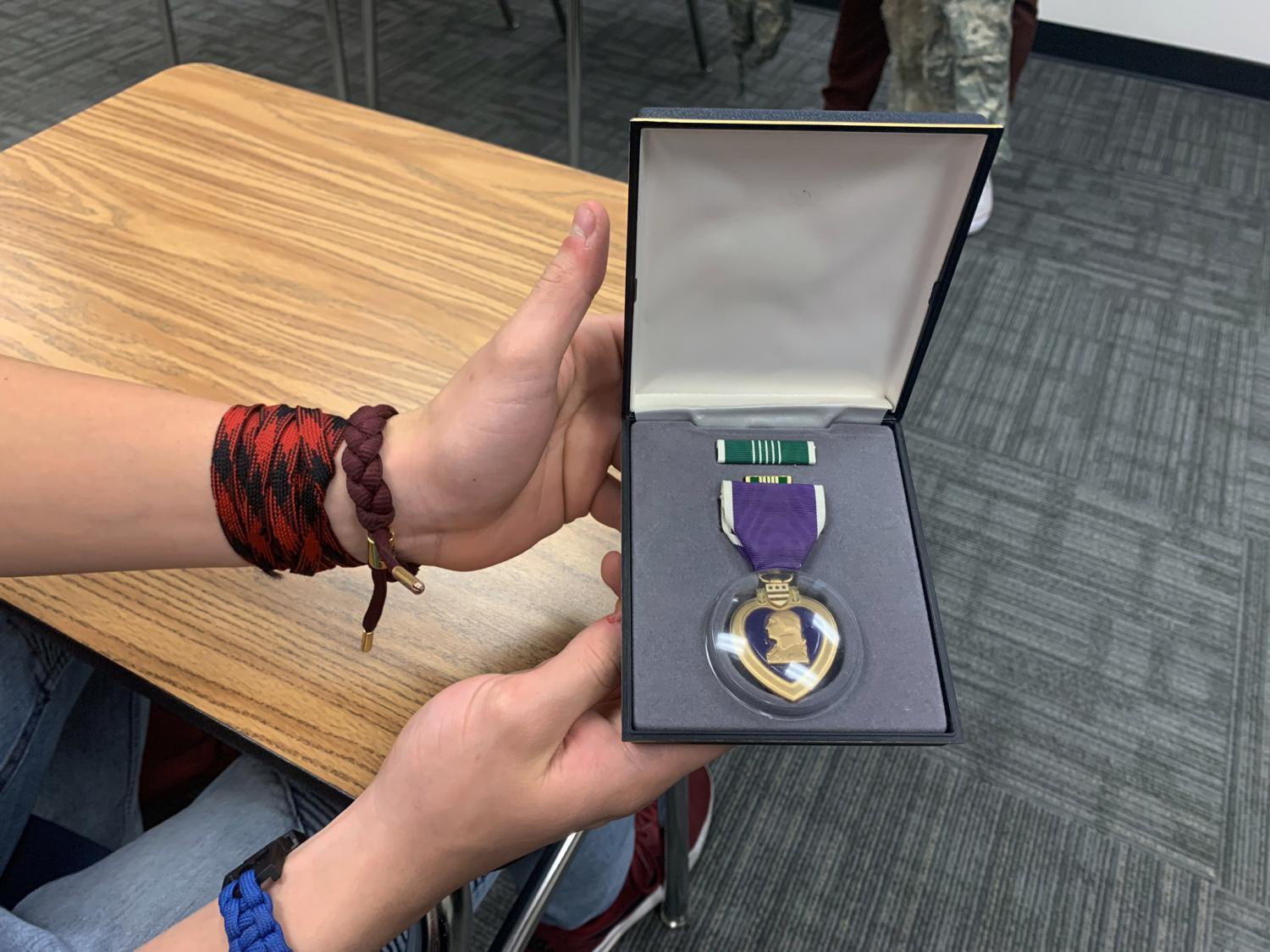 Mariana Dale/KJZZ
James received the Purple Heart after he was wounded in a rocket blast.

This year he debuted a new military history elective in the Chandler Unified School District.

Veteran speakers are a main component of the class. Throughout the year James has worked with the Veterans Heritage Project to invite veterans to share their stories with his students.

This day it was his turn.

"We're being taught the military and history by someone who's experienced the military, you know, and one day he'll be a part of history because he was there," said sophomore Hope Hendry.

James invited the students to ask questions about his service

Andrew Valle asked about the most difficult part of returning to civilian life.

"How many of you guys have heard of individuals with post-traumatic stress disorder? It's called PTSD,” James asked his students in return.

A few people raised their hands.

"For a long time I haven't shared the fact that I do have it," James said.

James is a coach and several of his players were in the room. He compared the combat mindset to the mental transformation that happens when a wrestler takes the mat.

“You have to be physical. You have to be tough,” James said. “That was the same way as that happened when you're deployed,  except the problem is you do it for 16 months, 24 hours a day, 7 days a week. It's hard to turn off.”

James said when he came back to the Valley in 2009 he’d scan highway overpasses for assailants, avoided large crowds like those at ASU football games and experienced nightmares.

“You didn't talk about that kind of stuff, you usually just drank,” James said.

James estimated more than a dozen veterans he knew have taken their own lives. The U.S. Department of Veterans Affairs estimates 17 veterans die by suicide every day. In 2017, there were 228 Arizona veteran suicides. 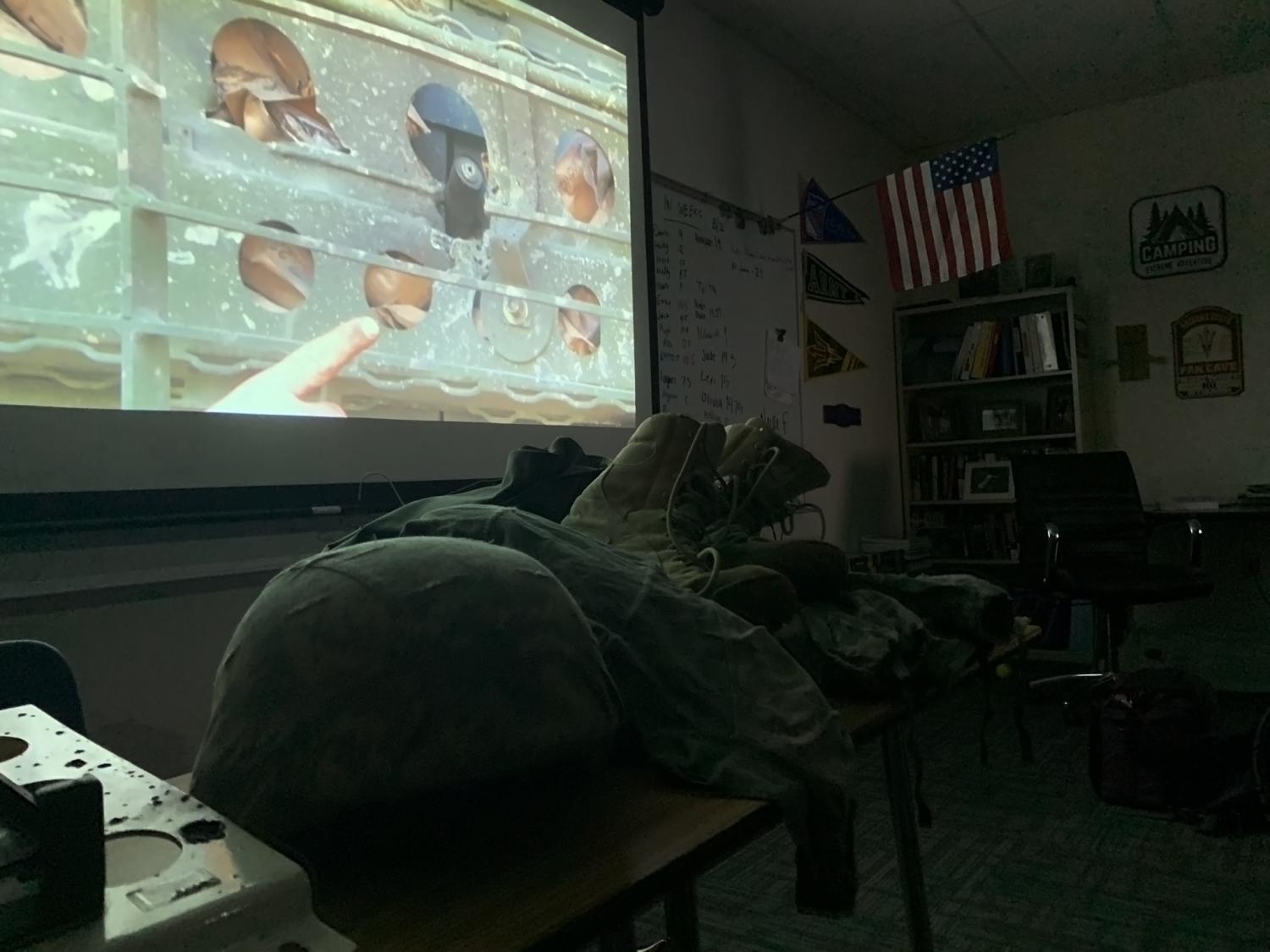 Mariana Dale/KJZZ
James passed around artifacts from his military service and shared pictures from his deployment to Iraq with his students on Monday, Sept. 16, 2019.

James said hearing other veterans talk about their experience, private and group therapy and a support system that included his family and a rescue shepherd mix dog named Ava helped him work through PTSD.

He wanted to be honest with students because he thinks opening up about challenges can be part of the solution.

“It’s still something I kind of get nervous about, because I don’t want the kids or administration to see me in kind of a different way or you know like a liability,” James said.

"I feel like his response was an eye opener to the problems that we have,” Valle said.  "It's a typical topic that we keep hidden from everybody else.”

For other students, the class connects them to their family history.

"My grandpa never really liked talking about Vietnam, and I really wanted to learn about Vietnam,” said sophomore Devin Daugherty. "Vietnam was not a place that was good for him."

“I think in too many history textbooks, individuals of color and women are really left out of history, and I think in this class it’s really good that the kids get to see that there were other people that contributed to war.”
— Christopher James

After taking this class, he feels like he has a better understanding of his grandfather’s service.

Daugherty himself aspires to serve in the military.

"I want to go overseas, and I want to come back knowing I did something for my country,” Daugherty said.

James developed the curriculum for the military history class from scratch. The semester-long elective spans from the French and Indian War of the 1700s to the War on Terror.

“I think in too many history textbooks, individuals of color and women are really left out of history, and I think in this class it’s really good that the kids get to see that there were other people that contributed to war,” James said.

One of the students’ final projects is an essay based on an interview with a veteran.

The assignment is inspired by James’ own history.

An assignment his senior year of school at Tempe High School that opened the door to a conversation with his grandfather about his service in the Royal Air Force during World War II.

“I want them to kinda gain a better understanding of what other individuals had to sacrifice, both men and women for this country," James said. 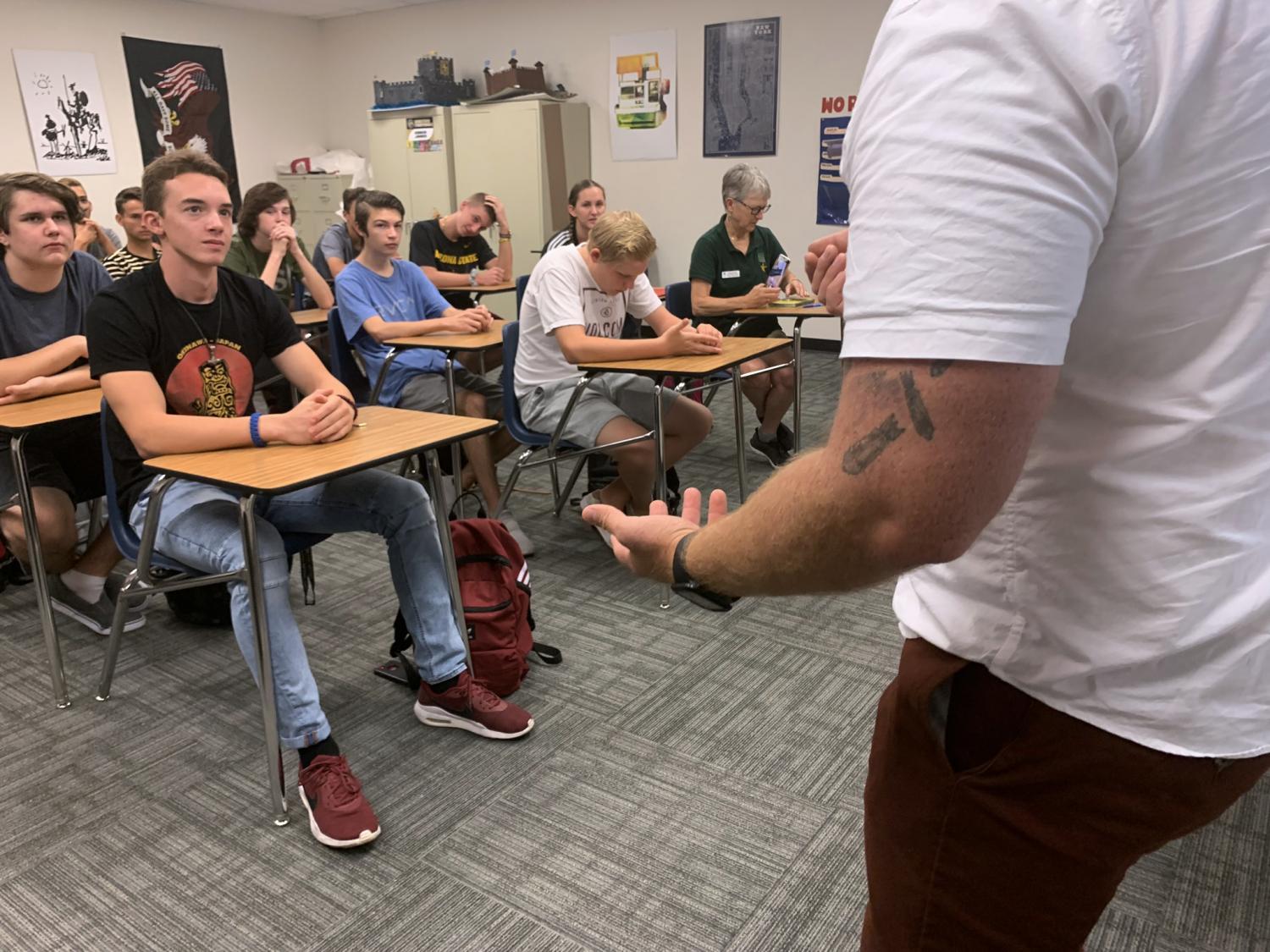 Mariana Dale/KJZZ
“I want them to kinda gain a better understanding of what other individuals had to sacrifice, both men and women for this country," James says of the students in his military history class.
Education The Show